After prison stint and loss of faith, painter regains inspiration

Fito Garche looks at the past 2 1/2 years, a rocky time in his life, as a test of faith.

The painter's then-girlfriend broke off a relationship in May 2004. He fell into depression and, in September of that year, broke into the ex-girlfriend's home and, police said, cut her with a knife and tried to choke her.

He was convicted of aggravated assault and aggravated battery, then spent time in prison until he was paroled in August.

"I had an opportunity to talk and discuss and to know other people who have committed great errors in their lives and paid for it," Garche says through a translator. "But it showed me they had hope. The most important thing they had was the desire to be productive members of society."

Garche is looking to revive his art career starting Friday, when he opens a show at Bridge Street Gallery, 315 N. Second St., next to the Gaslight Tavern. The show, titled "Free Dawn," runs through Oct. 27.

His art always has centered on his Christian faith. Now, it's about testing faith.

Fito Garche, a Cuban-born painter living in Lawrence, will show new mixed-media paintings in a solo exhibition called "Free Dawn." The works portray his personal journey of losing and then rediscovering his faith.

He's worked in a variety of media as an artist, including ceramics, watercolors and furniture.

But he mostly focuses on a mixed-media technique he developed in Cuba. It involves a mix of plaster and acrylic paint on particle board.

His last show was in May 2004, right before his troubles began.

"The situation for me was pretty bad," he says. "I was really depressed. I felt God didn't love me. I didn't want to paint. I just wanted to drink alcohol."

Now, after his prison sentence, Garche - whose given name is Adolfo Garcia - says he's given up drinking, doesn't smoke and exercises regularly.

"God blessed me with good health," he says. 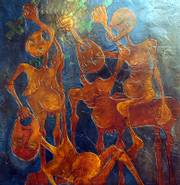 Fito Garche, a Cuban-born painter living in Lawrence, is restarting his art career with a show that starts Friday at Bridge Street Gallery, 315 N. Second St.

That lost faith has returned, and he's trying to show that in his art.

"I'm trying to show what's going on within myself," he says. "When I wake up in the morning, I feel like I can breathe in free dawn."

Cory Brinkerhoff, a friend of Garche's who owns the makeshift gallery where the show will be, says the artist has surrounded himself with supporters.

"I think he's got a number of friends here in Lawrence that are wishing him well, wanting him to do good and prosper," Brinkerhoff says.

Brinkerhoff admits some of Garche's contorted figures are difficult to understand. But he and friends who are art aficionados think Garche has promise to be a nationally and internationally known artist.

"I think someday he could be a pretty significant name in the art world," Brinkerhoff says. "He's got real talent."

As Garche has found new hope personally, he has new hope for his homeland as well.

He still has a daughter, two sons and other relatives living in Cuba. He talks with them every Sunday.

Dictator Fidel Castro is recovering from surgery, and his brother, Raul, has temporarily taken over Cuba. Garche says he thinks democracy would be better for the communist island because Cuban artists trying to bring their art to American audiences often are protested, even when their art is critical of the Castro government.

Still, Garche adds: "All the artists need the political problems for inspiration."

Garche, who does construction work when he's not painting, was last in Cuba in January 2004, and he hopes to return next year.

Garche says Cuban tensions are less of an influence in his art than they were when he came to the United States more than a decade ago.

But his current show does explore racial issues there. Garche says he had a black friend who was killed two years ago there over a chain he was wearing around his neck, and he says police discrimination against the black population is rampant in Cuba.

Still, he says most of his work will continue having a religious theme - mirroring his own faith journey.

"It's talking about when somebody loses the faith," he says. "These people have a way at the end of the path, if they look, they will find faith and find freedom."