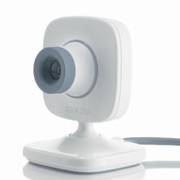 While it may not be heavily utilized yet, the Xbox 360 Vision camera certainly has potential to make the Live community even more complete. Currently, it can be used for UNO, the three Hardwood games, and the recently released Totem Ball.

When plugged in, it automatically changes your Dashboard background into a sort of reflecting wave pool that responds to your movement. If you're into flailing your arms wildly while listening to music, it's also possible to mess with the visualizations.

The unit itself is small and attractive in design. When transmitting images, it emits the familiar green ring of light around the lens.

Of course, there are downsides to it that have nothing to do with the technology itself. Rather, the potential problems will arise when the same loudmouth, often racist 13 year-olds that plague voice chat get their hands on it. In fact, I've already been mooned multiple times while playing UNO. This obviously isn't Microsoft's fault by any measure, and it's always possible to report misuse through XBL.

Hopefully, the Vision camera will be used primarily for enhancing the community atmosphere, rather than focusing on Eyetoy-esque gimmick games like the free-for-a-reason Totem Ball. Upcoming uses featuring face-mapping (Tony Hawk Project 8) and uses in multiplayer gaming ensure that it's a solid purchase for any member of the Xbox Live community.