While it could have easily become another title in the long list of terrible licensed games, Danny Phantom: Urban Jungle is actually a solid old-school shooter in the vein of Gradius. Unfortunately, the experience is a little short-lived.

It presents the gameplay in a left-to-right side scroll, rather than the more standard bottom-to-top. Outside of your basic attacks, Danny can acquire special powerups and weapon upgrades that add to the variety of offense. You'll get fire and ice shots, as well as huge attacks that clear the screen of enemies.

Once you get the enemies near death, it's possible to suck them in Ghostbusters-style with various techniques.The touchscreen is barely utilized, and can be used to switch weapons and apply various powerups. 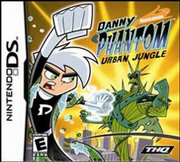 One of the strongest aspects of the game is the huge boss fights. Some actually reminded me of huge Contra boss creatures that filled half the screen. It usually doesn't take a huge amount of strategy to take them down, but they're fun nonetheless.

There are a few vehicle missions, but they're pretty much all bunched together. It would have been a better idea to spread them out amongst the standard missions in order to add a better sense of variety. Unfortunately, your ship and aiming reticle are a little sluggish in the control department, and these stages are certainly of lesser quality than the rest.

On the visual side of things, Danny Phantom stays true to the cartoon and features some very vivid and colorful backgrounds and characters. It's not full of flashy effects, but the game does a good job of accurately representing an episode of the cartoon.

For fans of the show, Danny Phantom is a solid shooter that should keep you entertained for a couple of hours. As someone who had never heard of the show before the game, I still had a good time with this decent portable action title. With a few more hours of gameplay, this would almost be worth a purchase regardless of your knowledge of the show.