HABEAS SHMABEAS - Senate Republicans and the White House reached an agreement on legislation that would redefine detainee rights in the war on terror. President Bush was strongly pushing for a bill that would legalize severe interrogation techniques and not allow enemy combatants to challenge their detention in court, also calling for a rewrite on how the U.S. follows the Geneva Conventions. Senators John McCain, Lindsay Graham and John Warner all opposed the original language of the bill, specifically arguing that altering the Geneva Conventions would endanger American troops. The senators eventually compromised on a bill that would not officially change the language of the Geneva Conventions, but will give the president executive authority to define "non-grave breaches" (i.e. anything other than "torture, murder and rape") of the Conventions and will not allow detainees to question their imprisonment or see evidence against them. Nine retired federal judges urged Congress not to support the bill, saying that it will weaken the basic writ of habeas corpus. "Depriving the courts of habeas jurisdiction will jeopardize the judiciary's ability to ensure that executive detentions are not grounded on torture or other abuse," wrote the judges. *...When confronted with accusations that he betrayed his maverick image and his personal history as a P.O.W. (who himself experienced torture) by caving in to White House pressure, McCain turns pale and will only mumble something about "Cheney's purple nurples." 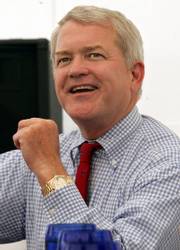 INAPPROPRIATELY COMPASSIONATE CONSERVATIVE - Florida Republican Mark Foley has resigned in disgrace following the release of lewd e-mails and instant messages he exchanged with a 16-year-old congressional page. The IMs include Foley offering to house the minor in exchange for sex, and even show the congressman engaging in cyber-sex while waiting to vote in the House of Representatives. Former pages have come forward and said that they also received improper messages from Foley as early as 1998. The 52-year-old Foley checked into rehab upon resigning, with his lawyer noting the congressman had struggled with alcoholism and been molested by a clergyman as a child. The scandal has spread to Republican House leadership, with Foley's former chief of staff insisting that he told House Speaker Dennis Hastert's office of Foley's behavior in 2003. Majority Leader John Boehner has said that he knew of the e-mails last year, but thought that it was Hastert's responsibility. The bipartisan House Ethics Committee has issued dozens of subpoenas looking into the matter, and the FBI has seized Foley's computer and personal records as part of their own investigation. *...Republican strategists are concerned that the Foley scandal will cost the GOP their control of Congress in the November elections. Republicans were hoping for the "October Surprise" of capturing Osama bin Laden to counter the negative press, but Foley has even tainted those plans, as instant messages between the al Qaeda leader and Foley have emerged. Foley: "i bet u have a hot bod under that robe ; )" ObL: "haha...ya I work out climbing caves" Foley: "come over to my place and you can look at counter-terror plans...if you spank it :P" ObL: "lol...you so crazy" 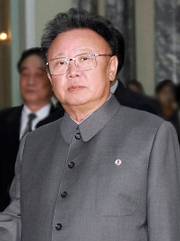 KIM JONG IL-IN' - North Korea claimed that it tested a nuclear device recently. If true, the test would be the first conclusive evidence to back up North Korean leader Kim Jong Il's claim that his despotic regime is indeed a nuclear power. The United Nations had warned North Korea of punitive measures if it carried out such a test and urged the reclusive nation to return to disarmament talks with China, Japan and the United States. Kim Jong Il, whose government President Bush labeled as part of the "axis of evil," is viewed as divine by the impoverished North Korean people and is reputedly a fan of horror movies and platform shoes. *...North Korea's nuclear program has been difficult to confirm, as U.N. inspectors are never sure if they're looking at a mushroom cloud or Kim Jong Il's hair. 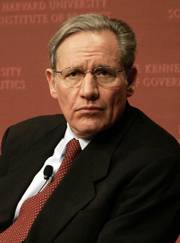 'DENIAL' ISN'T JUST A RIVER THAT BUSH CAN'T FIND ON A MAP - Bob Woodward's new book, "State Of Denial," has put the Bush administration on the defensive about their handling of 9/11 and the Iraq war. Woodward, the Pulitzer Prize winning Watergate journalist, details a meeting in July of 2001 between Condoleeza Rice and CIA advisors in which she was warned of an imminent al Qaida attack, but did not act on the briefing until September 10, 2001. The book also claims that the administration is intentionally misleading the American public about the true level of violence and chaos in Iraq, a war which Woodward says was mismanaged from the beginning. The Bush administration does not dispute many of the specific allegations in the book, but argues strongly against the way in which Woodward provides context for those allegations. *...For example, when Woodward says that Donald Rumsfeld ignored calls for more troops to help secure the peace in post-invasion Iraq, the White House says that Woodward doesn't take into consideration the extenuating circumstances. Namely that, at the time, Rumsfeld was totally distracted by the release of "Buffy The Vampire Slayer: The Complete 5th Season" on DVD. 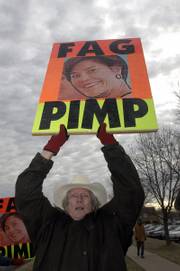 MAKING KANSAS PROUD - The Westboro Baptist Church of Topeka, founded by antigay crusader Fred Phelps and infamous for picketing funerals and other public functions with signs reading "God Hates Fags," has decided not to picket the funeral of five Amish girls killed in Pennsylvania. The Westboro Baptists agreed to let the Amish grieve in peace only after they were offered an hour of national radio time instead. The five children were slain in West Nickel Mines, Penn., when Charles Carl Roberts IV entered an Amish schoolhouse and shot 10 students before turning the gun on himself. The Westboro Baptists initially planned the protest because Pennsylvania Gov. Ed Rendell signed a law earlier this year making it a crime to demonstrate within 150 meters of a funeral. *...When asked what Jesus would do, a Westboro spokesperson replied that "Jesus would obviously picket dead Amish girls."