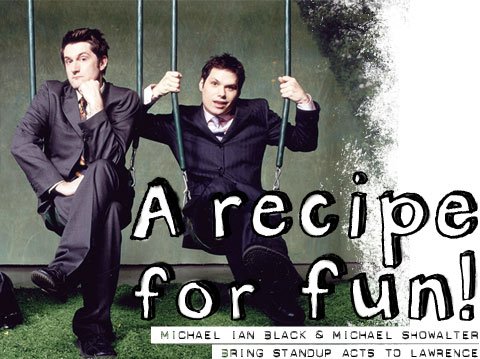 Michael Ian Black and Michael Showalter have been conjoined comedy twins since they were founding members of sketch comedy troupe "The State" back in the early '90s. They most recently costarred in Comedy Central's "Stella" and have appeared together in kick ass films such as "Wet Hot American Summer." Showalter was the auteur behind indie comedy "The Baxter" and has been spreading the gospel of standup (as well as spreading other things) around the country. Black has been a fixture on "Celebrity Poker Showdown," VH1's "I Love The..." series, "Ed," Reno 911!" and has otherwise embedded himself like a sardonic tick in the popular unconscious. They're now embarking on their first comedy tour as co-headliners, during which they'll separately perform some pure, old-school standup. They were kind enough to chat with us (in separate interviews - we've conjoined them for your convenience) before their performance on Oct. 17th at Liberty Hall.

lawrence.com: First of all, thank you very much for joining us here at lawrence.com...

Black: No, thank you. I've been a fan of lawrence.com for years.

You flatter us. But let's get the big question out of the way... why standup comedy and why now? You both have distinguished careers...why lower yourselves to Dane Cook's level?

Showalter: Well, Dane Cook is actually my favorite standup comedian, so I'm offended that you would even make that comparison in jest.

Black: I don't consider it "lowering" at all. If anything, I've always wanted to do standup. I think it's about the purest contemporary art form there is. It's one person up on a stage with a microphone trying to make a bunch of strangers laugh. That's an incredibly difficult and daunting proposition. So, for me, it's something I've always wanted to do and now I sort of finally feel like I'm ready to tackle it.

Showalter: Basically, the whole Stella thing kind of ended...it kind of marked the end, for me, of 15 years of collaborating. First doing The State and then doing Stella were two mega chunks of collaboration. I did do The Baxter in between there, but I kind of took stock at the end...while I try to figure out what I do next, I'm gonna perform a lot.

This is not actually my first tour...although a lot of the places we're going to, I've never been before...like Lawrence, KS. Although I was - I can't say that I was starting- but I did ride the bench on the KU basketball team.

Black: ...With standup, because you're by yourself, it's a lot freer. It can be a lot more improvisational, and the only person you have to be good to is yourself. So you can take more chances and you can take more risks, and you can do things that you can't do in a more scripted environment.

Also, you get paid more. You don't have split it with five or six other people. Those assholes are taking all your money every time you get on stage.

Michael Showalter, you mentioned The Baxter, a film you wrote, directed and starred in that featured Mr. Ian Black and KU alum Paul Rudd. How was the experience of making your first feature film? And is Paul Rudd as short as I imagine him to be?

Showalter: I think the answer to the second question is no. Paul Rudd is, I would say, of average height. I would definitely not describe him as short. He's not super tall, but he's definitely not short.

First question...(The Baxter) was the greatest challenge of my life. Creatively, it's the biggest thing I've ever done. ...Just to accomplish making the film and have it not suck was enough of a reward.

Michael Ian Black, you're currently Editor At Large for the new Cracked magazine, in which you've written, and I quote, "Elephant cock and doggy dick"...

Yes. Where does Cracked go from there?

Black: Well, I guess the question is really where do I go from there with Cracked? And the answer there is...uh...Santa Claus? My next piece for Cracked is entitled "What I Would Say To Santa Claus If We Were About To Get Into A Fight At Some Dive Bar".

Could we get a preview?

Black: Basically, "I will fuck you up, fat man." It's a lot of tough talk, but at the same time there's a certain insecurity there because I don't really want to get in a fight with Santa or anybody.

The new Cracked is much more adult and sophisticated...

Let's talk a little bit about "Wet Hot American Summer," a film that Michael Showalter co-wrote and starred in and that featured Michael Ian Black. Describe the experience and, specifically, the "more farts" audio track on the DVD.

Showalter: We just wanted to make a dumb, raucous..."Meatballs," Monty Python, absurd, crazy comedy. And that's what we did. David Wain, the guy that co-wrote and directed it, and I both had formative summer camp experiences and decided to write a movie about it.

Black: The overriding memory that I have of shooting "Wet Hot American Summer" is that it rained every single day we were there. So we were trying to shoot this movie about the last day of summer camp that was supposed to be a sunny day, and we were constantly dealing with mud and precipitation...it was kind of horrible. But it was great because we were all sort of stuck together. All these fun actors living in a summer camp and up to our knees in mud. It was actually a great time.

And the "more farts" track I had nothing to do with...but I think it's genius.

I can't watch the film without the "more farts" track...

Black: Well, that says more about you than it does about the movie.

Granted. Michael Ian Black, you're a gambling enthusiast who has appeared on "Celebrity Poker Showdown" a number of times. What pissed you off more during the first tournament...losing to "Mad TV" star Nicole Sullivan or the fact that she donated her winnings to cats?

Black: Well, clearly, I'm not there to lose, so losing is far more aggravating to me than Nicole Sullivan's poor choice of charities.

You know that did piss me off, actually, now that I think about it...that she donated all of her money to cats. I like Nicole, but let's be honest...she's an idiot. (Laughs) She's a total idiot.

Honestly, you can't swing a dead cat without hitting a cat.

Any plans to go back on Celebrity Poker Showdown?

Black: Well, I'm their Paul Lynde. I'm their center square. I'll show up for them any time that they want me, because I like poker and I like free trips to places. Those two things combined? I'm there.

When you're sort of a C-level-famous as I am, you don't get invited to a lot of things. So when somebody invites you to a poker tournament and you're a degenerate gambler like I am, the answer is always going to be yes.

Black: Oh, I don't care about the cause. I mean I'm fine with it, but honestly...if it was to promote malaria, I'd be like, "All right."

You've both been working together, on and off, since "The State" in the early nineties. It was a far too short lived sketch comedy show that developed a loyal cult following. Do you look fondly back on those day, or are you sick of people quoting recurring characters like Levon or Doug to you?

It's just annoying when people run up to you and scream at you and tell you to say shit. I really appreciate it when someone says something nice to me about something that I've done, but when they say "Say 'I'm outta here'", like I'm a monkey...what you'll get if you do that is a really, really awkward response. And you'll feel really weird, and you'll walk away from that interaction going "Michael Showalter's really, really weird."

Because I'm very good at creating intensely awkward situations if I want to.

Black: Yeah, I don't like being quoted at because there's no good response to it when someone comes up to you and says something to you that you said ten years ago.

But whether or not I'm nostalgic...I'm nostalgic for it in the sense that I was younger and now my life is slipping away. I'll be dead very shortly.

...It was really hard to be in The State. There were eleven of us and we were all friends, and there was no leader...it was a pain in the ass.

Speaking of nostalgia, Michael Ian Black, you seem to be chained to the green screen at VH1s studio. Do you long for a day when time ceases and there are no more decades to talk about?

Any fond memories of the I Love The... series?

Black: Not really. I mean,they gave me good sandwiches. That's a pretty good memory. I had the Buffalo Chicken Sandwich from Cozy's. Do you know that sandwich?

Finally, what do the two of you hope to accomplish with this standup tour?

Black: ...Standup comedy, for a lot of people in comedy, is kind of like going to a gym. You do it because...well, it's actually more fun than a gym and it doesn't hurt as much. Well, it can hurt in a different way.

It's just a very pure way to work, to do exercise. That's why I want to do it...and for the love. All the love from the audience.

Showalter: I just want to spread the word of comedy. I want to sprinkle the seed of comedy all over the country...and inside women's vaginas.

Like Johnny Appleseed. Noble aims. Thank you for joining us here at Lawrence.com and good luck with the tour!

I had no idea who Nicole Sullivan or Michael Ian Black were before reading this, but Sullivan just became a minor hero in my eyes - and Black simply convinced me that he's a jerk of the first order.