Why: Are there exploding barrels in a prison courtyard?

If you took the sub-par Total Overdose and mixed it with the excellent Mercenaries, then made the end product about five times worse, I'd imagine something like Just Cause would be the result. It's a game that has a few decent ideas that are ruined by many terrible aspects.

You play as Rico, an entirely generic Latino badass in the vein of Antonio Banderas. He says really bad one-liners, hangs off of planes by one hand, and runs like an absolute idiot. The story is entirely uninteresting and revolves around a forceful regime change in the island of San Esperito.

Just Cause's unique aspect revolves around it's stunt-driven gameplay. By "stunts," I mean doing things like hopping out of a speeding car through the window onto the roof. Once you're on the roof, you can still somehow turn the car. Yeah, it's that kind of game. 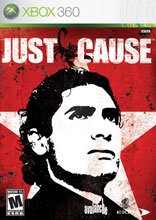 Some of the stunts are fairly fun, such as the ability to deploy your parachute when driving a motorcycle or standing on top of a vehicle. In fact, there's a LOT of parachuting in this game. Every time you get transported to a new area by chopper, you jump out rather than the helicopter simply landing. It's entirely unrealistic, too. As someone who has gone skydiving a few times, I can safely say it would hurt a lot if you deployed your parachute about 5 feet above the ground. In Just Cause, you can jump from above the clouds and deploy your chute at the very last second without damage.

Actual combat is an absolute joke, as the game features a far-too-generous auto-aim system. All you have to do is face in the general direction of the enemies and mindlessly pull the right trigger. One or two shots later, and their bodies awkwardly and unrealistically fall dead (one of the many physics problems in the game).

San Esperito is a huge area, almost rivaling San Andreas. Unfortunately, it's not nearly as populated. It may be gigantic, but it all looks like the same hilly, tree-filled terrain. There are some small cities, but they're few and far between.

It doesn't even feature many sidequests or other incentive to explore the island. You can liberate areas by killing the opposing group, you can participate in 10 races, and you can do multiple generic fetch-quests.

Taking a cue from Mercenaries, you can call in Heavy Drops if you need a vehicle. Unfortunately, it will malfunction more often than not. There were countless times that I was on completely flat, accessible terrain, and I would get a message telling me that a vehicle could not be dropped there. Other times, it will simply say "Heavy Drop is not available" or "Extraction is not available" for no apparent reason.

The game is absolutely plagued with inexcusable glitches. During every cutscene with text, a line from a previous racing mission was overlaid on top of the current dialogue. Law enforcement will attack you even if you don't have any wanted level. Enemy soldiers will stare straight at walls while being shot in the back. At one point in the 360 version, it told me to "press Select to access your PDA" despite the fact that the controller does not even have this button.

On first glance, it seems like a visually impressive game. Your first gameplay impression is flying through the realistic clouds as you plummet to the island. The trees and water look great, almost reminiscent of those in Oblivion. Once you play it more, however, the constant "sameness" of the environment wears on you. Motion blur is overused, and many environments are entirely non-interactive. With all the parachuting in this game, you'd think there would be some collision detection with the trees. Rather, you can simply fly through dozens of trees in one pass with a completely open canopy.

If you don't like generic Spanish/mariachi/etc music, then I hope you have an iPod you can plug into your 360. All of the music sounds almost identical, and wears thin quickly. The voice acting is awful, and the dialogue itself it just as bad.

Despite some decent stunt ideas, Just Cause seems entirely unfinished. The sheer amount of glitches, nearly empty environment, shoddy gunplay, laughable A.I., and short length (the main story can be beat in under five hours) should be enough reason to stay away from this title.