Bad: Occasional camera issues, a bit too much text

While it may not have the initial "WOW" factor of Ocarina of Time, Capcom's Okami is a title that comes damn close in quality to what many consider to be the greatest game of all time. It may borrow several aspects from Nintendo's opus, but it simultaneously introduces many elements that make it an extremely unique experience.

It starts out with an admittedly long-winded and slightly boring introduction, told with visuals, text, and random mumbling effects. As I pressed the X button again and again to advance the text, I wondered if I was in for a tiring gaming experience.

I couldn't have been more wrong.

The gameplay starts out humbly enough, as you learn how to control the God Amaterasu (in wolf form). Your moves are limited at first, allowing you to wall-jump and charge. In battle, you have a "reflector," which is a shield of sorts that can slash at your enemy. 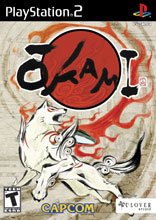 I'm trying to put my finger on the moment I realized Okami was a masterpiece, but I think it was more of a gradual revelation between the 5th and 10th hour of gameplay. Oh, and for those who are concerned about the diminishing length of adventure games:you have nothing to worry about. Okami is a 35+ hour game, and it gives you reason to go through multiple times.

There are two main gauges in the upper-left hand corner: solar energy and ink. Solar energy is the Okami equivalent of Zelda's hearts, and they can be leveled up in similar fashion. Finding three "sun fragments" will add a solar energy unit, and the gauge can also be upgraded by earning praise (more on this later).

The ink gauge is something else entirely, and is a feature unique to this title. At any point, you can hold R1 to freeze the action and make the screen look like a canvas with colorless outlines. A paintbrush descends into the frame, and you can use it to perform certain actions.

At first, it's mainly limited to slashes. You can freeze the frame and paint straight lines to cut down trees, bushes, rocks, or to cut enemies. Later, you can use the brush to revive dead trees, sprout new trees, paint constellations, create bombs, control water and wind, create lily pads, change the time of day, and more. It really is a fantastic gameplay element that is incorporated beautifully. More than anything, it makes me hope this game will be ported to the Wii, as the controller would be absolutely perfect for this.

Rather than a standard experience point-based upgrade system, Okami takes a unique approach to improving your character. By gaining "praise," you can upgrade your life gauge, ink gauge, astral pouch (extra life, basically), and purse size. Praise can be earned in multiple ways. Bringing dead trees to life will get you a small amount, while getting rid of evil gates or feeding animals will net you far more.

I think it's arguable that Okami might be the most beautiful game on the Playstation 2. Titles like ICO, Shadow of the Colossus, and God of War are certainly gorgeous, but none of them present the full package quite as perfectly as Okami. It truly is the best example of pure art on the system, and it would be an insult to simply call it "cel-shading." It resembles a living, breathing painting in a way that Wind Waker didn't.

Interestingly, my friend walked in while I was playing it, and said "Wow, what score are you going to give this for graphics? 2 out of 10?" I really think this shows that most casual gamers equate "good graphics" with "realistic graphics." Okami is certainly not realistic in any fashion, but it's still the most impressive graphical achievement on the system due to the amazing art style.

On the audio end of things, Okami is almost as impressive. The orchestral soundtrack stays fresh and suits the different atmospheres/moods beautifully. Unfortunately, the mumbling effect used for voices does tend to get a bit annoying after 20 hours or so.

Outside of the extremely large amounts of text, the only real complaint I have is the sometimes-difficult camera. There will be times in which you need to draw a line from an environmental object to your character, and it will occasionally be difficult to get them both in frame appropriately.

It's very hard to play this game without constantly being reminded of Zelda. You travel through dungeons and defeat bosses, you collect items to add units to your health bar, you can change times of day and control the wind, the first boss is a giant spider, there is a fishing minigame, you warp via whirlpool, you travel to villages and perform tasks for the people, etc. etc. etc. If it included just these elements and nothing else, it would be easy to call this title a ripoff. Despite the similarities, however, Okami has a personality and gameplay all its own.

Okami is an absolutely amazing game, but I have to admit that it's not for everyone. The casual GTA/Madden gamer crowd is sure to be turned off by the slow beginning, overabundance of story, and uber-Japanese feel to everything. If these aspects don't scare you off, you're in for the best videogame experience since Resident Evil 4, and one of the very best games on the Playstation 2.