BABY JAY MISTAKEN FOR QUAIL, SHOT IN FACE-Vice President Dick Cheney was in Kansas last week for a fundraising event to help boost Republican Jim Ryun's re-election effort. Ryun is facing a tight race in the 2nd district against Democrat Nancy Boyda, and Democrats claim that Cheney's visit is a sign of weakness in the Ryun campaign. The reception raised over $200,000 for the Ryun campaign, with attendees paying $100 to hear Cheney speak and an additional $1,000 if they wanted to have their photo taken with the VP. *:Those who paid extra for the photo have since demanded their money back after learning that Cheney's lack of a human soul prevents his image from appearing in photographs.

GOOGLUBE - Popular online video service YouTube was bought last week by Google for $1.65 billion. The internet titan fended off financial suitors such as Microsoft and Yahoo for sole possession of YouTube, which was founded in a garage in 2005 and quickly became the premiere video sharing service on the web. "This is the next step in the evolution of the internet," said Google CEO Eric Schmidt. *:Schmidt added, "This merger marks the pinnacle of the information revolution, which is completely reshaping our civilization. It is astonishing to witness the ease with which one can now procure videos of Paris Hilton doing unspeakable things to an orangutan. This is truly a golden age."

THAT SCANDAL WITHOUT THE PEDOPHILE-Susan Ralston, a top aide to presidential advisor Karl Rove and a former aide to convicted lobbyist Jack Abramoff, abruptly resigned from the White House staff last week. Her resignation came less than a week after a bipartisan congressional panel, investigating Abramoff's dealings with Congress and the White House, released a report stating that Abramoff had 485 lobbying contacts with White House officials over the course of three years. The report stated that Ralston seemed to serve as a personal conduit for Abramoff within the White House. Abramoff has been convicted of bribery and corruption, and Ohio congressman Bob Ney has been indicted for his association with the disgraced lobbyist. The White House denies having close ties with Abramoff. The administration's statement on Susan Ralston's departure says "She did not want to be a distraction to the White House at such an important time and so we have accepted her resignation." *:Ralston defended herself, saying that a majority of Abramoff's 485 White House contacts weren't even related to lobbying: "Jack was always drunk dialing the Oval Office to score some pills from Laura," she says.

LIKE AN URCHIN-Madonna has adopted a motherless one-year-old boy from Malawi, with the blessing of the child's father and the approval of a Malawi judge. The international pop star was in the impoverished African nation to help open an orphanage that will raise children according to the practices of Kabbalah, a mystical sect of Judaism recently popularized amongst celebrities. *:One of the spiritual activities Madonna has planned for the orphans will be operating the hundreds of sewing machines that will be cranking out yards of official Madonna brand Kabbalah string (Only $55 per bracelet!). "Their tiny fingers are perfect for that crap," said the former Material Girl.

LICENCE TO IL-The U.N. Security Council unanimously approved sanctions against North Korea for its claimed nuclear test. There is still doubt, though, whether Kim Jong Il's regime actually detonated a nuclear device, as Japanese scientists have not detected any radiation above the Sea of Japan. *:The Japanese Parliament isn't taking any chances, calling for the construction of a Giant Lizard Defense Shield. The so-called GLDS is a network of enormous moths that will be launched to intercept any radioactive, fire-breathing dinosaurs, which North Korea also claims are within its arsenal.

'COMPLIANCE DOESN'T SELL TICKETS'...BRIBERY DOES! -The KU Athletics Department was firmly slapped on the wrist by the NCAA last week with sanctions including a three-year probation, loss of three football scholarships for two years, and loss of eight paid recruiting visits and one scholarship in men's basketball for two years. The sanctions were in response to a string of violations under former KUAD director Al Bohl, including academic fraud within the football program and a booster giving over $4,500 in gifts to basketball player Darnell Jackson after he enrolled at KU. Before being forced to resign near the end of the Roy Williams-era at KU, Bohl reportedly told a KU NCAA-compliance worker that "Compliance doesn't sell tickets." At a press conference, current KUAD director Lew Perkins-whom the NCAA credits for improving compliance at KU-smiled when answering many of the questions about the violations. *...When asked if any of the withheld money would be redirected towards non-athletic scholarships, Perkins laughed really, really hard. 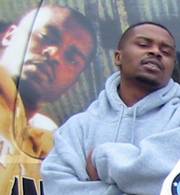 (INSERT QUIP ABOUT LIVING ANYWHERE NEAR SAM BILLEN)-A man found dead in a field Sunday morning in what investigators say was a "suspicious death" was been identified as 28-year-old Anthony J. Vital of Lawrence. The body of Vital-who was a member of the Lawrence hip-hop group Da Bombsquad-was found around 9 a.m. Sunday in the 700 section of U.S. Hwy. 40 a few miles west of Lawrence. That location happens to be just across the street from the practice space of another Lawrence band, The Billions, whose members were all out of town at the time of the discovery. "'The Farmhouse' has always been creepy, it just is, but it just got a whole lot creepier," said member Sam Billen. He also said this is the second time a body was found across the street from his home, the first being in 1988 at his family's Topeka residence. *...In lieu of an inappropriate joke: the sheriff's office is asking for the public's help finding a vehicle that may be associated with the death: a maroon 1988 Ford Thunderbird with the personalized license plate, "JVOLA." Anyone with information should call the CrimeStoppers hotline at 843-TIPS.