A man found dead in a field Sunday morning has been identified as a 28-year-old hip-hop artist from Lawrence.

The Douglas County Sheriff's Office said the death of Anthony J. Vital is "suspicious," but as of Monday night had not released his cause of death or details about what investigators think happened.

Vital, known by the stage name "Clacc," performed with the local hip-hop group Da BombSquad, which formed in 2000 and had released two records. Those who know him say they don't know what happened.

"I'm just wondering just like everybody else," said Paul Vital, his older brother. "He was a sweet, humble guy. ... He was a beautiful person, and I'm not just saying that because he was my brother."

Vital was found about 9 a.m. Sunday in a field on the north side of U.S. Highway 40, about two miles outside the city limits. The sheriff's office on Monday reiterated a call for the public's help to provide information about a car that may be associated with the death: a maroon 1988 Ford Thunderbird with the personalized license plate "JVOLA."

The office asks anyone with information about the car to call the sheriff's office at 841-0007 or the CrimeStoppers hotline at 843-TIPS. 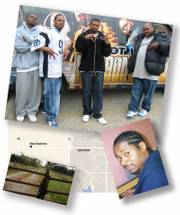 Anthony J. Vital, in photo at bottom right, was found dead Sunday morning in a field on the north side of U.S. Highway 40. Vital was a member of the local hip-hop group Da BombSquad, in top photo. He is pictured at far left. Bottom left, Anthony vital's body was found in this area along U.S. Highway 40.

"We're following up on leads, conducting interviews, processing evidence," said Lt. Kari Wempe, a Douglas County Sheriff spokeswoman. "We have had quite a few TIPS hotline calls, so we're working on all of those. ... The investigation is still pretty fresh."

Vital came to Lawrence from Louisiana as a teenager in the 1990s, according to court records.

He received probation in the late 1990s for aggravated burglary in what a police report said was a home invasion involving a group of suspects who knew the victim. Acquaintances said that despite the occasional scrape with the law, he was a spiritual person who tried to take the high road.

"He was a hard-working kid at his craft. ... He had to fight through some things," said Keith Loneker of Lock-N-Load Records, which produced Da Bomb Squad's first album in 2001. "He was a kid who had so much talent. If he could have been guided, there was a lot out there for him."

In 2005, Da Bomb Squad self-produced its second album, "I Got Work," which touched on classic hip-hop themes: money, drugs, women, cars and regional pride. Group members said they were shooting to become the first big hip-hop act to come out of Kansas.

More about the case

Earlier this year, Vital had held down a part-time job cleaning and fueling buses for the Lawrence Bus Company.

Bandmate Richard Thomas said Monday that he hadn't spoken to Vital in a couple of weeks. Lately, he said, the group members had been working on solo projects and were tied up with family and jobs. He said Vital was married.

"I really don't know what happened," Thomas said. "The police wouldn't tell us much of anything."