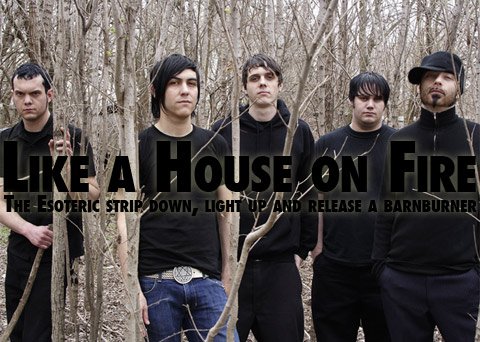 The Esoteric's ten-year rise to household name-status among the acultured in Lawrence has been marked by hard work and some hard luck-the band's house went up in flames nearly two years ago). "Subverter," the new release from The Esoteric, hits stores October 17. On a tight deadline from Prosthetic Records, Lawrence's premier metal band worked from the gut, got help from some friends and recorded their most rockin' album to date. Eloquent ambassadors Stevie Cruz (vocals) and Eric Graves (guitar) stop by our smoldering podcast studio to talk about musical egalitarianism, water in the basement and Arnold Schwarzenegger's neck.

lawrence.com: Look at all your music projects: a gangsta-rap unit; a Misfits cover band, Coalesce, Reggie and The Full Effect, NEON. You're obviously interested in more than just the metal niche...

Cruz: I think it's kind of inherent, coming from this area. You see a lot of the same kids at hip-hop shows that you do at indie rock shows and metal shows-that's kind of the spirit of Lawrence. It's in our blood: we like to check a lot of different things out and explore various styles of music.

Graves: I don't think it's really possible to be a totally generic metal band in Lawrence because of all the culture and cool people around, and all of the music going on that's going to inherently influence any kind of artist or performer in the area. There's no way to really be:

Cruz: : just one thing. Or generic, as you put it.

Graves: Right. It's going to turn into something at least somewhat interesting and creative.

Technically, you guys are ahead of the pack. It's almost a Tool-like skill level you're working with now.

Graves: I wouldn't be caught wearing a Tool shirt walking downtown though. I'd be shunned.

Cruz: But he used to, all the time: Remember when we went and seen Tool? That was badass.

The new record, "Subverter"-how long was it in the making?

Graves: About three and a half months: It was recorded at Run Riot Studio [in Shawnee Mission] with Paul Malinowski, it was mixed at West End by Paul and myself and sent to The Blasting Room in Fort Collins, Colo., for mastering.

Cruz: We recorded the drums at Black Lodge, just like "The Sureness...." :We were really stoked to be working with Paul Malinowski who, in conjunction with Eric, recorded and produced this record. [Paul] was in this really sweet band which we all worshipped called Shiner, a really great Kansas City rock band. And speaking of really great Kansas City rock, also on the new CD is a song called "Don't Waste Guts," and it has a guest vocal appearance by Steve Tulipana, who is the vocalist/bass player for Roman Numerals. But he was also in another of our favorite Kansas City rock bands, Season Of Risk. It's a total dream-come-true to have Steve rocking with us on the album.

Graves: It's by far my favorite song on the record.

How is this record an evolution from the last one?

Graves: Style-wise, it's expanded in almost every direction.

Graves: I think for our purposes we're going to have to go ahead and call it singing because:

Cruz: There's a couple of notes I almost hit?

Graves: :the listener is able to hear notes now. There are notes and melodies in the vocals that haven't been there before.

Cruz: It's not singing like "la la la"-it's kind of gruff like Lemmie from Motorhead or Neal Fallon from Clutch. :We switched it up, as we always do.

Graves: Musically, it's more-I hate to use the word "accessible":

Why is that a bad word? Don't you want it to be more accessible? It doesn't mean sell-out, does it?

Graves: I think a lot of people would hear that word and think "Oh, it means there's less creativity." But to me it means it's more rockin'.

Cruz: It's a lot more rockin': It can be viewed as more accessible and at the same time it's very punk rock. :I think everybody was a lot more spontaneous and going with their first emotion and feeling and not picking things apart like we did with "The Sureness."

Graves: That's a good point. This is the first and only time that our band has been asked professionally to create an album in a time frame. :In this case, the owner of our record label said "Hey, I would like you guys to record a new album."

Cruz: As soon as possible.

Graves: We had three months to go and record a new record. :I think the songs are actually better because of that.

You've had many trials and tribulations: perennial car trouble on the road, your house burned down-what happened there?

Graves: The official statement was that it was an undetermined cause, and that was the result of the point of origin being washed away by the several feet of water that they obviously had to put in the basement. : Initially, they were very suspicious as to:

Cruz: Suspicious of everything. They brought up every possible scenario:

Graves: Until they realized that we didn't have any renter's insurance. :Then they went, "Oh, never mind. The questioning is over. You guys are screwed."