Moral of the Story: Stick with Tiger

When it comes to golf games, it seems like the Tiger Woods series dominates the list. The series practically has a monopoly on the genre, and the mere fact that ProStroke Golf would even attempt to challenge that hold is admirable. Unfortunately, that's about the only admirable quality in ProStroke Golf. The game is simply a debacle in terms of graphics, design, and control.

The game's most distinguishing feature is its swing control, which at least differs from the patented Tiger formula. After selecting a club, the camera shifts to a first-person view looking down at the golf ball. Players then use the right analog stick to swing the club, and the left analog stick to control foot movement and the angle of the clubface. It's a different approach, but its execution is fairly sloppy. Messing with your feet placement while trying to swing is annoying, and its effects are hardly noticeable. Furthermore, the top-down camera angle is problematic for lining up shots properly, especially when it comes to putting.

Making matters worse is the extremely limited selection of modes. Players have the choice to jump right into a match or they can choose to participate in a tournament, career mode, or training mode. The training mode is fairly unhelpful, opting to throw giant blocks of text at you and expecting you to absorb all of it. On the plus side, the game is pretty easy to pick up, so trudging through the training scenarios isn't really necessary. 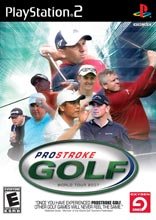 The career mode, usually the main attraction in games like this, is also poor in its implementation. Your options are limited to playing match after match with little else to do. Sure, you win money, but there's really nothing to do with it. You also gain renown, which is used to increase your golfer's stats and unlock bigger events, but even this feels like little incentive to keep playing. Even more painful is the fact that every time you enter a tournament, you're stuck with a partner whose every move you're forced to watch. It would be nice if there was a fast means of skipping this, as it makes tournament play almost unbearable.

The game offers little in the way of replay. Most gamers will quickly grow tired of the career mode, which is basically the game's main attraction. Multiplayer for up to four players is offered on one console, but online play is nowhere to be found. Since the core gameplay isn't that great, you probably won't find a lot of friends that want to put up with the clumsy controls long enough to make it through 18 holes.

Perhaps the game's biggest problem is in terms of graphics. They're bad. Really, really bad. The terrain in particular is simplistic and bland. Several of the obstacles feature some of the worst pixelization I have seen in years. Even the golfers themselves look below average, with animation so stiff it's almost painful to watch. It doesn't seem like it would be that hard to recreate a realistic golf swing, but ProStroke proves otherwise. Other problems include the dull looking courses, the problematic camera, and the lack of color variety. In short, the game looks awful.

The audio isn't significantly better. Sam Torrance, Ian Baker-Finch, and Alan Green provide commentary, and more often than not, they sound more bored to be announcing than I am to be playing. Ambient effects are minimal and sound pretty bad when they are present. Background music is kept to a minimum, but it's not particularly great when it is there.

ProStroke Golf is an all around underwhelming experience. If you're looking for a realistic golf game, play Tiger Woods.