There aren't many guaranteed formulas for success in the gaming industry, and God Hand certainly proves that. Capcom is one of the most (arguably THE most) respected third-party developers in gaming. Clover is the fantastic developer that put together Okami, the recent PS2 masterpiece. Add them together, and what do you get? A terribly repetitive ode to old-school beat-em-ups.

I'm a huge fan of Final Fight, as well as other similar titles from back in the day (Streets of Rage, the TMNT games, the Simpsons arcade game). They were unapologetically simple, requiring the gamer to simply move from left to right, pummeling whatever walked your way. Unfortunately, that formula never translated too well to the 3D realm. Fighting Force for the original Playstation was lackluster, and God Hand repeats that feel.

All of the stages are terribly bland and unoriginal, and feature little to no gameplay outside of beating equally unoriginal enemies to a pulp. One of the saving graces is the customization available in terms of your attack style. As you progress, you'll be rewarded with (or purchase) various new attacks, which you can map to whatever button you'd like. 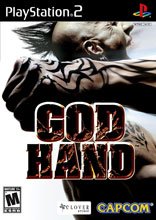 While the customization is nice, the fighting itself is without any real sense of strategy. All you do is mash on the face buttons and occasionally throw in a "guard breaker" attack. Every once in a while, an onscreen prompt will allow you to jam on the circle button to perform a hilariously-animated power attack.

You have access to a limited amount of Roulette attacks, which are activated by pressing R1. After doing so, the game slows down and you scroll through a list of huge attacks. They vary from pitching a baseball into an enemies face to kicking them square in the balls (complete with laugh track for some reason).

Some of these attacks can be unique or humorous, but they wear thin quickly. After this inevitably occurs, you're left with the awkward controls. The camera is oddly placed behind the character, and you'll immediately notice how much it negatively affects the gameplay. Simple actions like turning or evading are made more difficult by the angle, and you'll oftentimes try to evade right into a wall that you can't see.

Visually, there is absolutely nothing unique or striking about God Hand. The character designs are run-of-the-mill action characters/enemies, and the stages are as generic and bland as can be. Glitches pop up from time to time, especially one that involves walls constantly disappearing.

It sounds like Capcom recruited The Ventures to do the soundtrack, as it's almost exclusively surf rock. This somewhat fits with the goofy feel of the game, but a little more variety would have helped. All of the voice acting falls along with this dumb-on-purpose presentation and plot of the game, so it's hard to really criticize it. This humor is going to be hit or miss with most people.

God Hand may feature some humorous attacks and a uniquely weird presentation, but that's not enough to make up for the gameplay. Once you've seen all the attacks and tired of the humor, all that's left is a disappointing beat-em-up that fails to live up to the titles it's paying homage to.