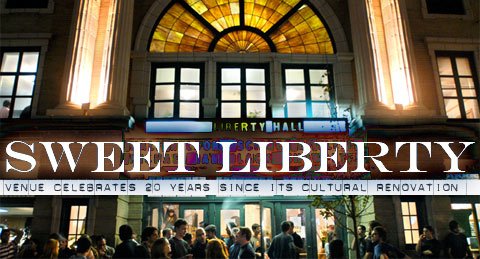 Two decades ago, David Millstein entered the vacant Lawrence Opera House at 642 Mass. with intentions to buy it. The condition of the historic venue was hardly what he expected.

"I walked in and there was a boxing ring set up. It absolutely smelled of beer and sweat," Millstein says.

"They had been having the fraternity boxing matches here. The whole place was decked out in black paint, except for the big beams which were sheathed in shaggy cedar. Then there was this ring in the center, and the stench was crazy. The place was really at its nadir."

Likewise, wife Susan Millstein recalls coming across another scuzzy artifact: a half-eaten chocolate cake perched at the top of the stairs.

"It had this knife with desiccated frosting on it. It was like a 'Twilight Zone.' I think they had a final party and just shut the doors and walked out," she says.

Fortunately for Lawrence, the party would start back up again ... and it was one the whole city could enjoy.

David Millstein and his late partner Charlie Oldfather bought the dormant building out of bankruptcy at a 1985 sheriff's sale.

By October of 1986, the building had reopened as Liberty Hall - its original name from 1856, when it was erected as a town meeting center.

"Saving this building in its original form - the way it's meant to be used - is number one for me," Susan Millstein says. "I feel like it's safe for now."

Chuck Mead, BR549 frontman, worked as the projectionist at Liberty Hall, 642 Mass., when it reopened in 1986. Mead will headline a 20th-anniversary concert celebration at the historic venue.

During the last 20 years, Liberty Hall has become a literal cornerstone of the Lawrence community. It represents one of the key pieces that led to the renovation of the 600 block of Massachusetts Street. It is the most storied music venue in the city. And with its two art house theaters and eclectic video store, it has become the haven for movie fans who have no desire to see the latest Tom Cruise sequel.

In celebration of this longevity, Liberty Hall will throw a 20th anniversary party tonight, with musical performances by BR549 frontman Chuck Mead and Arthur Dodge and the Horsefeathers.

Tinkering with the concept

Mead himself was among the original employees of the renovated Liberty Hall.

"To me, Liberty Hall is family," Mead says. "People who work there know what I'm talking about. There's a vibe where once you're there, you never leave."

As a young twentysomething in 1980s Lawrence, Mead had worked at various theaters. He was hired at Liberty Hall as the projectionist when the "new" venue readied for its first movie.

Mead says, "Dave (Millstein) built the old projector himself. Before that, I worked for corporations and you never saw the guy who owned the place. But Charlie and him were there all the time. It felt better knowing the guy who was ultimately responsible for my paycheck, and there he is with his hands elbow-high in grease from putting together the projection machine."

Although Mead and the owner disagree on what the first movie was to screen at Liberty Hall - Millstein thinks it was "A Room With a View" and Mead recalls it was Akira Kurosawa's "Ran" - they both remember the cinematic concept took some tinkering before it jelled.

Patrons file outside of Liberty Hall for a cigarette break during a Tuesday night show featuring comedians Michael Ian Black and Michael Showalter.

Originally, the theater tried showing classic pictures such as "The Wizard of Oz."

"It was weird because those retro movies didn't work. It worked for all of us because it was great to see great prints of 'The Seven Samurai.' But the big breakthrough movie for Liberty Hall is when we got 'La Bamba' there," Mead says.

As for the music side of things, Mead has plenty of fond memories of concerts past - from The Police to Charlie Daniels to Ultravox.

Personally, the singer-guitarist has logged plenty of time onstage at Liberty Hall through his old band The Homestead Grays, BR549 and solo shows.

Mead has performed in dozens of historic theaters throughout the country. But he believes what sets Liberty Hall apart is that it's a true multipurpose center.

"Most of those places have fixed seating. (At Liberty Hall) they can clear all those chairs out and have a wedding reception, then set up chairs for a concert. That way you can get everything from an African singing troupe to a punk rock show, then you'll have a wedding, then show a movie," he says.

Jacki Becker has been involved in a number of these events during the last 15 years. As a concert promoter for her own Eleven Productions, Becker is frequently bringing acts to Liberty Hall. This week alone she imported folk diva Ani DiFranco and comedians Michael Ian Black and Michael Showalter.

What does she find so special about the venue?

"Some people say there are ghosts there," Becker says. "I don't know. I haven't seen any yet. But in terms of a venue, for its capacity, it's really intimate. You have this balcony quite close to the stage. So when you're sitting upstairs, you don't feel far away. You feel very at home with the artists there."

She claims bands that could easily sell out bigger venues (Deftones, P-Funk, Interpol, for instance) will consistently underplay Liberty Hall, simply because they prefer the place.

"I recall in 1998 when we did three dates with Widespread Panic; they were really starting to peak at that time. Instead of playing any of the larger rooms in Kansas City, they kept adding dates in Lawrence because they love Liberty Hall so much," she says.

Of course, not everything always goes according to plan. The Millsteins mention the hall has seen its share of mishaps, such as an occasional drunk guy leaping off the balcony or an older person falling down the stairs.

"But as far as events, they've been held together with a modicum of decorum," David Millstein says. "I don't really remember anything going phenomenally wrong. We've had bad shows. And we've had great shows that nobody showed up to. Like (blues guitarist) Willie King: 32 people showed up. What was that about? Those are things that catch me off guard when you bring something really good in that doesn't sell, or you bring something really bad in that sells like crazy."

Thanks for the memories

Liberty Hall has played host to divas and racounteurs, folk artists and punks, and several of the music industry's most notable names. Here's a list of some of the most recognizable:

While David Millstein doesn't recall who was the first artist to perform at the renovated venue, he can't forget that it was the KU Brazilian Club that first rented it out.

"They were serving purple passion drinks, and we came in the next day and saw the brand-new carpet was flooded with purple passion spills. That prompted the first big freakout. We had just upgraded the place, and the people weren't respecting it for what we felt was its due," he remembers.

But gradually the owners and the community have come to terms with the venue.

"We've become hardened. It does clean up. People do respect it, and the respect grows over the years," he says.

After 20 years, the Millsteins have proven you can have your desiccated cake and eat it, too.

"The hall resonates with the patina of who has been here, and I think that's cumulative," he says. "Each band, each event leaves a certain bit of energy. Usually, in this place, it's a positive thing."

The list of amazing shows at Liberty Hall goes on and on... we're so spoiled here in Lawrence. : )