I have to give kudos to the latest trend in children's portable game design: copying Zelda. If you're going to be unoriginal, you might as well rip off one of the greatest games of all time, and a number of kids' developers have learned this. The latest game to follow suit is the GBA adaptation of Nickelodeon's Avatar: The Last Airbender. The game takes the popular TV license, throws in some old school Zelda, and comes out with something that's an all-around mixed bag.

Players take control of series heroes Aang, Katara, and Sokka-simultaneously no less. The story picks up where the TV show left off, with the characters at the Northern Water Tribe. Things kick off quickly when the village is attacked, Katara is kidnapped, and Aang and Sokka are left to set things straight. The adventure takes the trio through a wide variety of locales, each with their own distinct look that appropriately captures the spirit of the show.

Gameplay bears more than a passing resemblance to Zelda, minus a lot of the depth. Initially, players will control only Aang, with his sole ability of being able to swing his weapon. After a short period of time, Sokka joins the party, giving access to his boomerang and club abilities. Rounding out the group later is Katara, who wields an ice whip and has the ability to create bridges out of ice. Perhaps the game's most interesting and frustrating feature is the way it actually handles the additional party members. Instead of handling one character at a time, players control all three at the same time. By default, Aang is selected, but by holding the L and R buttons, players can use Katara and Sokka respectively. It's an interesting design mechanic, but in execution, it results in a lot of unnecessary button fumbling when trying to perform the desired action. 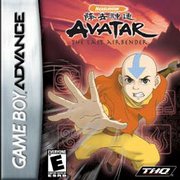 The game itself is comprised almost entirely of puzzles and fighting, which is too bad because neither are particularly well done. Combat is simple, and at times frustrating. Each character has a Chi meter that depletes as they use their attacks, a feature which adds nothing to the experience except for painfully lengthening what should be short fights. Enemy AI is for the most part bad, and after players figure out the unique tricks necessary to defeat each enemy, there remains little challenge in defeating them.

The fact that fights are separated by lengthy bits of puzzle-solving would be good if the puzzles themselves weren't so grating. Avatar makes abundant use of one of the most archaic and annoying puzzle types: the block puzzle. The developers try to make things interesting by adding in factors such as different switch types and varying water levels within the boxes, but these simply make the puzzles longer and more tedious. If I really wanted to move this many boxes, I would get a job at UPS.

Graphically, the game is actually fairly decent for a GBA title. The game world is colorful, with a good amount of variety between the different settings. Fans of the series will appreciate the look of the game, which does an overall good job of translating the license to a portable medium. A little more variety in the dialogue pictures would have been nice, as well as a wider variety in the characters' animations.

Sound on the other hand is average at best. The music is dull and repetitive, and the sound effects barely stand out. All in all, you won't be missing much with the volume off.

The bottom line is that Avatar is simply another barely passable portable Zelda clone. Its party system is unique, but the control scheme ends up hurting more than helping. Kids might enjoy it, but anyone looking for a good action-adventure on the go would do better to look elsewhere.

The GBA version isn't as good as the DS or PS2 versions... and obviously it's never going to be- it's a GBA!! Knowing tha platform and it's limitations, Avatar does a pretty amazing job in the graphics department, and the sound and music is being judged way too harshly here. Sure there's no dialogue, but then there normally isnt on GBA. The music suits the game pretty well and isn't nearly as annoying as heaps of other titles... I don't think this guy actually played the game, but just copied the opinions of another reviewer!