Remember how crappy that movie Pearl Harbor was? Sure, it had some nice eye candy and some great sound effects, but it was hugely boring and featured nothing to keep your interest. Now imagine if they released three more Pearl Harbor movies, and they were all pretty much the exact same thing. Splinter Cell: Double Agent is that fourth Pearl Harbor movie.

When the original Splinter Cell was released for the Xbox, it was instantly considered one of the most technically impressive console titles. Few could dispute this, as it featured some beautiful lighting and fire effects, impressive physics, and fantastic sound. Double Agent follows this tradition of technical excellence, but like other games in the series, doesn't offer much in the way of fun.

Gameplay is a tedious chore of trial-and-error gameplay, made even worse by an awful camera. Whenever you're in tight quarters, the camera zooms so close to Sam that it's nearly impossible to get a good feel of your surroundings. Considering many portions of the game take place in cramped rooms and small elevator shafts, this can turn into a massive annoyance. 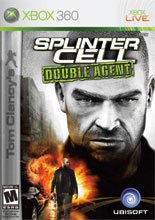 Enemy A.I. is borderline retarded, and oftentimes won't spot you even if you're literally two feet from his face. This happened once while I was ducking by a low wall, and an enemy walked up to the other side and smoked a cigarette. Sam's head was fully exposed over the edge of the low wall, and the enemy just stared at me and smoked his cigarette like nothing was suspect.

Guards will sometimes follow extremely awkward routes, and will literally stand in corners and stare straight at a wall. The best way to deal with them is to slowly creep up behind them, drag them to a dark corner, and then either knock them out or kill them. This got old four games ago, and it's sure as hell old now. A variety of alternate methods are also available, ranging from sticky cameras to airfoil rounds. These aren't so much useful as they are entertaining, and after a few missions you'll be right back to the old drag-and-choke.

As a double agent, Sam must keep up his trust with both the NSA and the terrorist JBA group. Two bars in the bottom left indicate this level, and certain mission objectives will raise or lower it. For instance, if you kill an innocent man when the JBA asks you to, they'll trust you more, but the NSA will lose a bit. It's a nice change of pace for the series, but really isn't much of an innovation. The "undercover" missions at the JBA headquarters are terribly slow and uninteresting as well.

Objectives are generic and dull, and the story is as lifeless as ever. Missions are of the "steal item X from this safe" and "place bomb here" variety. The map system borders on unusable, featuring a jumbled mess of transparent green rooms.

Once you get caught, the small amount of fun you can have with this game completely disappears. When you're sneaking around, it can be slightly amusing to mess with guards and dispose of them in creative ways. Once they see you and the guns are drawn, however, it becomes one of the worst action experiences I've seen. Controls for pulling out guns, searching through your inventory, and generally fighting off the enemy are clunky and unresponsive. As soon as they spot you, you might as well load up your last checkpoint and continue sneaking around.

Laziness in development is evident at times, with even spelling errors making an appearance ("To prevent loosing JBA trust, leave the restricted area"). For all the praise this series receives for realism, certain aspects exhibit anything but. I already mentioned the blind and dumb guard A.I., but there are also instances in which a shotgun will fail to kill a man even when you shoot him at near point-blank range.

The one truly strong aspect of this series is and always has been its visuals and audio. Double Agent looks fantastic in HD, with impressive textures and some awe-inspiring moments. Rappelling down a Shanghai tower at night with a fireworks-peppered sky is one of the most impressive visual moments in recent gaming memory. Despite its technical mastery, there are still odd moments of glitchiness. More than once, I had Sam literally standing in thin air. I also experienced a ton of slowdown every time I would follow a character down stairs.

If you have 5.1 surround sound, Double Agent is a fantastic title to use to show it off. Rain, wind, gunfire, car engines:everything sounds perfect. Voice acting is competent, with Michael Ironside and 24's Dennis Haysbert making return appearances.

The online aspect of Double Agent has been a polarizing issue to fans of the series. It's truly love it or hate it, and I definitely consider myself part of the latter. You can play as either spies or mercenaries on a variety of small-to-medium maps. Spies attempt to download a file and escape, and the mercs naturally try to stop them. While it's certainly a unique online mode thanks to the faction's different abilities, that doesn't make it fun.

Ever since its release, Splinter Cell has faced comparisons to the Metal Gear Solid series. I've never quite understood why these comparisons are made, as they truly are two completely different experiences. MGS is a heavily story-based game with a huge amount of entertaining gameplay and quirky Japanese humor. SC is a series that attempts (unsuccessfully) to be highly realistic, but ends up feeling like something you should be paid hourly to play. To bring back that opening analogy, the Metal Gear series is the Saving Private Ryan to Splinter Cell's Pearl Harbor.

There is obviously a market for this game, as it regularly sells well and receives its share of critical acclaim. Praise is deserved on the technical end, but I've always believed gaming is supposed to be about fun. If you want to show off your HDTV and surround sound system, then you might want to check out this title. If you want to have an entertaining gaming experience, however, there are far better choices. Hitman: Blood Money is a superior stealth-based game for the 360, and the MGS series trumps Splinter Cell in virtually every regard. Double Agent is a tedious, overhyped, and unoriginal technical showpiece that did next to nothing for me.