Most annoying victory dialog: "I want neither to harm nor be harmed."

Political intrigue? Divine conspiracies? A rag-tag group of heroes forced to save the world? No, it's not the plot of the long-overdue Final Fantasy XII; it's the plot of Valkyrie Profile 2: Silmeria, that other RPG from Square Enix.

Silmeria is the belated sequel to the PS1 sleeper hit and recent PSP port, Valkyrie Profile. Taking place 200 years before the events that transpire in the original, Silmeria follows the adventures of Alicia, a young princess cursed to share a body with the soul of Silmeria, a banished Valkyrie.

Angry at Odin for imprisoning her soul in the body of a human, Silmeria chooses to defy the gods by assisting the country of Dipan in waging war against Asgard. What follows is a quest for a god-killing artifact, the resurrection of the dead and a handful of double-crosses that are too complicated to explain in this confined space. 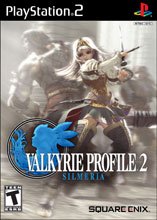 Gameplay consists of two main elements: exploration and combat. When exploring the game plays like a side scroller. You move through various areas of dungeons, scouting for treasure and solving puzzles. In this mode Alicia can shoot beams of light that imprison enemies and allow her to teleport to their position (Many of the game's puzzles are constructed around this ability.). The dungeons are well designed and many are very original, but all of them end with a boss battle.

Any fan of the series will tell you that the main draw of the Valkyrie Profile series is its combat. A mix of real-time strategy and command-based attacks, the system makes the move from 2D to 3D without sacrificing any of the complexity.

When you encounter an enemy the game seamlessly shifts from the side scrolling perspective taken during dungeon exploration to true 3D. Here, you command your party against either one or a series of enemies in an arena-like environment, moving your group and issuing commands in real-time. When stationary it is possible to see an enemy's attack range, allowing you to guide your party out of harm's way.

Once your party is close enough to attack you issue commands by pressing the face button (X, Square, Circle or Triangle) that corresponds to each character. Each character has distinct attack speeds and combos and successive hits fill your Special Attack Gauge. When your Special Attack Gauge reaches 100 it is possible to go into Soul Crush Mode. Like Final Fantasy's Limit Break system, Soul Crush attacks do massive amounts of damage, but unlike Final Fantasy, these attacks can be chained together. The result is combat that relies heavily on the strategic placement of the characters and the player's ability to harmonize their individual attacks to be effective. It is all very tactical, but when mastered it becomes extremely rewarding.

What's more, it is now possible to target individual parts of an enemy's body. Successive strikes to a specific area will eventually cause it to break off, yielding rare items or more money. Also, breaking off enemy body parts actually effects how they fight (For instance, when fighting a cave dragon I managed to hack off both of its arms, rendering its physical attacks useless.). Do enough damage to a specific body part and your party will enter Break Mode, which allows you to attack repeatedly until the Break Gauge runs out.

Equally deep is the Skill System. Every weapon, accessory and piece of armor in the game has a corresponding rune and color. When outfitting a character, it is possible to form skills by connecting specific runes and colors. From there a character learns that skill through battle experience and once learned it can then be equipped. More skills are added as the game progresses and certain skills only become available after finding specific items.

This system works well. It is possible to customize characters to your specific needs without forcing them to learn abilities that don't suit their character type. However, it can become frustrating when specific characters run out of skills to learn early and must wait until the story has advanced far enough to open up new ones.

Like the original, Silmeria allows you to recruit fallen heroes to your party, but rather than discover them through story elements like in the previous game, they are now found imprisoned within weapons and other items found in dungeons. Once a warrior is added to your party they must reach a certain level before they can be released.

While it is nice to recruit stronger characters to your party at the beginning of the game it quickly becomes tedious, having to constantly re-teach the same skills and re-equip the same weapons and armor to each disposable hero. It is extremely time consuming and attributes to one of Silmeria's biggest problems: excessive length because of tedious character managment. With all the additions this sequel makes, this is one system that could have been scrapped. Besides, there are enough permanent characters this time around, that it is possible to play through the whole game with the same party.

Visually the game is stunning. Environments are vivid and meticulously detailed. Character models are sharply rendered and well designed while enemies are made of fewer polygons to allow more of them on screen at a time. Possibly the best visual aspect of Silmeria are the lighting and particle effects. During Soul Crush attacks beams of light streak and dance across the screen, casting shadows and lighting faces. Fire glows and smolders realistically, even simple spell effects like Lightning are impressive. Unfortunately the cutscenes could use some work and the game suffers some slow down when the combat gets heavy. Sound effects are impressive and the soundtrack matches the game's epic tone. Silmeria takes full advantage of the Dolby Pro Logic II mix.

Valkyrie Profile 2: Silmeria is an excellent RPG and a worthy alternative to Square Enix's other premiere franchise. While the game's sometimes unbalanced difficulty and epic length can give cause to frustration, the exceptional combat and skill systems both make up these shortcomings in full. If you play one RPG all year, you should probably play Final Fantasy XII, but once that's over give Valkyrie Profile 2: Silmeria a look, you won't be disappointed.