Someone: Explain the appeal of this show to me

Okay here's the story: Every 1000 years 100 demons called Mamodo descend to earth to battle each other, with the eventual victor becoming the king of the Mamodo world. One such Mamodo, Zatch Bell, befriends a high school boy named, Kiyo and so begins their adventure.

And what a horrible adventure it is. Mamodo Fury features more problems than your average video game cash-in on an inexplicably popular anime. That's saying a lot since there are plenty of crappy market tie-ins for it to compete with.

So what sets this one apart from the pack? Well for starters, the combat is extremely simplistic. In each level Zatch and Kiyo battle another Mamodo/human team. This consists entirely of pressing one button. Tap it for the standard attack, hold it for a stronger or different attack.

Of course, your opponents aren't about to stand still, so a lock-on function is implemented to keep track of them. Unfortunately, the only way to lock-on to an enemy is to stand completely still, making you an easy target. To make matters worse, the camera is a constant source of frustration, making it almost impossible to track your opponents in its default position. The second position is even worse and while the third position is the best of the three, it requires constant baby-sitting. 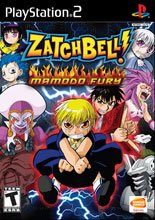 It's also possible to engage your opponents up close with melee combat. Per usual, the game reveals another shortcoming: the horrid collision detection. It's possible to swing through opponents or misjudge their position altogether because of camera issues. On several occasions I was struck by an enemy melee attack when they were facing in the opposite direction of me.

The A.I. is also ridiculously stupid at times. Opponents and friends alike will repeatedly get caught on walls and corners. Sometimes it seems like they just forget what they're doing. In one battle my opponents stopped fighting me about mid-way through and ran in circles around the center of the ring. Another time, two opponents managed to get outside of the building we were battling in and then continuously tried to attack me through a solid wall.

There are some attempts at depth here. Performing well in battle gains you Mamodo Points that you can use to upgrade certain aspects of Zatch and Kiyo. It's also possible to perform your strongest spell for massive damage after fulfilling certain criteria within a level. The problem here, is that the criteria change for each level and the game never tells you what they are, making it a guessing game.

Mamodo Fury also switches up level objectives every now and then two. Instead of repeatedly having to battle opposing teams, sometimes you have to unleash your strongest spell or find an opponent's weak point. Again, many of these objectives are vague and usually result in trial and error.

The game also features a versus mode and some multiplayer minigames. While versus mode retains the character improvement system of the Story Mode, you basically do the same thing you did in the Story Mode. The same tactics work and the most of the combat even takes place on the same stages. The minigames are a decent distraction, but they suffer from many of the same technical issues (collision detection, A.I. stupidity) as the main game.

Finally, the visuals are grainy. The cel-shaded character models match their television counterparts, but the textures aren't as bright or colorful as they could be. The sound is incredible annoying, not only because of the poor quality but because of the constant repetition as well. Each time a Mamodo attacks their human partner must say the name of that spell. In a battle where both parties are attacking over 100 times each the constant sound of "Zaker!" gets really old, really fast.

There is no reason anyone should ever play Zatch Bell! Mamodo Fury. The combat is simple and dull, the A.I. could use a safety helmet, the camera is atrocious and the Japanese humor is lost on any non-cosplayer. If you are a fan of the show, you are better off just watching a rerun. Avoid this cheap cash-in at all costs.

What, no mention of how the game is so awful that it made you kick your Playstation and scratch the disc?