If you see Dan Forrest commuting between Ottawa and Kansas University, don't assume he's belting out a top-40 hit along with the radio.

Chances are, the radio isn't even on.

"I sing on my commute," Forrest says. "Either when it's quiet or I'm doing something repetitive or monotonous like driving or mowing the lawn, I tend to daydream. And that's when good ideas come."

At age 28, those good ideas already have let Forrest make a name for himself in the world of choral composing, especially for his church choir anthems. He's already had around 40 compositions published and has won several national awards for his works.

But you probably won't hear him bragging about it. His deep Christian faith leads him to deflect the praise elsewhere.

"The Lord has just blessed me and blessed me," Forrest says. "It's not me. The Lord is doing great things for me, and I'm grateful."

Forrest, a native of upstate New York, came to KU in 2003 to pursue his Ph.D. in music composition. He already had been publishing works for about three years.

He started dabbling in writing during his undergraduate days at Bob Jones University, a fundamentalist Christian school in Greenville, S.C., and continued as he completed his master's in piano performance there.

But after three years of teaching piano at Bob Jones, Forrest decided to move himself and his family to Kansas to pursue a degree that would allow him to write music and teach writing full-time. 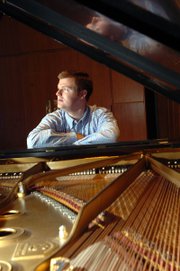 Kansas University composer Dan Forrest is an acclaimed composer of sacred choral music. At age 28, he's already had about 40 compositions published and has won several national awards for his works. Forrest is pictured on Thursday at Murphy Hall.

Forrest, his wife, Addy, their 18-month-old son and 3-year old daughter now live at Amazing Grace Baptist Camp near Ottawa, where they are caretakers. They are members of Calvary Baptist Church in Ottawa.

Forrest says he can't separate his faith from his sacred music.

"I know a lot of composers who write church music, and for them it's more a business," he says. "The texts aren't necessarily as meaningful to them. I believe personally - my faith is in Christ alone - and I want that to come through in music."

Forrest, who is working on his dissertation and will complete his degree in May, writes music intended for both the sanctuary and the concert hall. He writes some instrumental music in addition to his choral pieces.

But the bulk of the work is church anthems, the kind sung on Sunday mornings.

He comes into this world at a time when praise bands and praise hymns are becoming more commonplace in churches. But he's not concerned for the future of his profession.

"I think there will always be a remnant of people who, for whatever reasons, are interested in really well-done stuff, music that doesn't sound cheap or like pop," Forrest says.

The awards he's garnered in his young career show he might be one of the ones who can make it, even if the market tightens. Those awards include:

¢ The 2004 and 2005 Plus Award from the American Society of Composers, Authors and Publishers, which goes to top young composers.

Craig Courtney, an internationally known composer and director of publications at Beckenhorst Press, which has published about 10 of Forrest's works, says he thinks the young composer has a bright future.

"He's one of the best," Courtney says. "He has great talent."

"Of anybody I've ever worked with, he's the one that improves the most," Courtney says. "He takes to heart any suggestion I've made."

And, Courtney says, it's clear Forrest believes in what he's writing.

"I think there's a sincerity, as well, when that happens," he says.

Forrest admits it's challenging to write pieces that are often based on ancient texts, and which many composers have written about before.

"I really want to write things that are fresh and original-sounding," he says. "I don't want them to sound like a lot of things that already exist, partly for a commercial reason - if they sound the same they don't sell. In a sense, there's nothing new under the sun, but I want it to sound fresh to the listener."

"What he writes is very singable," says Johnson, whose choirs have performed several pieces by the KU student composer. "He understands the voice very well, and I can't say all composers do that."

And Forrest's faith, Johnson says, shines through in his pieces.

"He writes with sincerity and genuineness with the texts he's setting," Johnson says. "He doesn't brag on himself a lot. He really believes the inspiration for his talent truly comes from God." 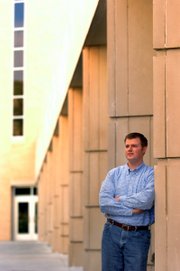 Forrest says he's "about 20 percent done" with his dissertation, a six-movement choral work with orchestral accompaniment. He also has enough other works commissioned to last him through 2007.

His music will make its Carnegie Hall debut in February, when the Shawnee Mission East Choraliers sing "Arise, Shine!"

When he finishes his dissertation, he plans to return to Bob Jones University to teach, mainly music theory classes. He's looking forward to being able to share his faith openly again in the classroom.

"I don't think I could teach indefinitely at a place like KU, where I'm told not to (share my faith)," he says.

At KU, he says, he's let his music express his spirituality for him. He points to "Never a Brighter Star," one of his compositions that was sung at the KU Holiday Vespers concert in 2005.

"The Gospel is so clear in that piece, but it's performed at an event we can't even call 'Christmas' - perish the thought we name it after Christ," Forrest says. "It's kind of a platform. It's my world view, my philosophy - I believe in the Bible - and it's a way I can share that."

Forrest says he can't imagine ever ending his writing career. He's hoping to carry his early momentum into the future.

"Spiritually, I hope I'm setting forth truth with a capital T for people in a way we couldn't do it if we were just doing poetry repetition," he says. "Music is so much more of a powerful vehicle. So much truth and beauty comes from it."