EVEN GEORGE AND WHEEZY CAN'T AFFORD IT -High rent isn't just a problem in big cities like New York and Los Angeles. It's also an issue in suburban Kansas City, the New York Times reports: "Olathe (pronounced oh-LAY-thuh), 20 miles southwest of Kansas City, showed the biggest jump in the percentage of people paying at least 30 percent of their income on rent, as well as in those paying at least 50 percent on rent. In a largely rural state not known for growth or overwhelming prosperity, here is a minimetropolis of manmade neighborhood waterfalls, of seemingly endless construction of shopping malls and office parks. Executives and immigrant workers, retirees and young families have all been drawn to its abundance of jobs, parks and high-performing public schools." The same Census report showed the average monthly rent in Lawrence is $690. *...This has been a boon for Olathe's lawn jockey vendors, and the number of yappy dogs being carried in expensive hand bags are at an all time high.

PUTIN YOUR FOOT IN YOUR MOUTH-Jerusalem police last week recommended that Israeli President Moshe Katsav be charged with rape, aggravated sexual assault and misconduct after five women who once worked for him filed complaints. Israel's president is mostly a ceremonial post, and Mr. Katsav has denied any wrongdoing. While visiting with Israeli Prime Minister Ehud Olmert in Moscow, Russian President Vladimir Putin was reported to have said of President Katsav: "He turns out to be a really powerful guy! He raped 10 women! We all envy him." Kremlin officials insist that the comment was mistranslated and intended only as a joke. *...President Putin later added that he was merely admiring Katsav's stamina. "After a long day of raping the Chechen countryside and the civil liberties of the Russian people, I'm just pooped!"

THE CHIEFS ARE ALREADY RADIOACTIVE-The FBI quickly determined that internet threats of "dirty bomb" attacks at NFL stadiums over the weekend were a hoax inspired by a writing competition between two men trying to come up with scary threats. The writer, a 20-year-old grocery clerk in Wisconsin, had posted the scenario 40 times over the past two months and the legitimacy of the plot was always dubious (one of the listed cities doesn't even have an NFL stadium, for example). Despite these doubts, the Department of Homeland Security still alerted authorities in the cities mentioned that they were potential targets of a radiological terrorist attack. *...Despite accusations of fear mongering leading up to the mid-term elections, the Department also announced that voting for Democrats might cause everyone you love to explode.

GIVE ME LIBERTY... Lawrence cultural institution Liberty Hall celebrated the 20th anniversary of its current incarnation last week. The music venue/movie theater/video store has become a cornerstone for the entertainment scene in downtown Lawrence, screening independent films and hosting countless musicians since 1986. *...Special slogans were commissioned in honor of the event: "Liberty Hall-Getting You Schnockered At The Movies Since The Reagan Administration" and "Liberty Hall-What's That Funny Smell When The Lights Go Down At The Yonder Mountain Show?"

...OR GIVE ME DEATH-President Bush enacted controversial changes in the system of interrogating and prosecuting terrorism suspects by signing the Military Commissions Act of 2006 into law last week, setting the rules for the trials of key al-Qaeda members in a step that he says will help protect the nation. The act allows the president to declare anyone (including American citizens) an "enemy combatant," thus denying them legal protections under the Constitution and the Geneva Conventions: "a person who, before, on, or after the date of the enactment of the Military Commissions Act of 2006, has been determined to be an unlawful enemy combatant by a combatant status review tribunal or another competent tribunal established under the authority of the president or the secretary of defense." Democrats opposed to the act say it legalizes torture and suspends habeas corpus. "We will look back on this day as a stain on our nation's history," said Sen. Russ Feingold. *...While the Military Commissions Act doesn't allow enemy combatants to challenge their detainment or even question why they're being held, it does allow them to fight one another with chainsaws in Thunderdome.

CAUGHT BROWN-HANDED-Detroit pitcher Kenny Rogers appeared to have something dirty or dark on his left hand during the first inning of Detroit's 3-1 win over St. Louis in Game 2 on Sunday. Umpires brought Cardinals manager Tony La Russa out to the field at the end of the first for a brief discussion, but Rogers' hand was evidently never inspected and he stayed in the game, ultimately throwing eight shutout innings. After the game, Rogers said it was a clump of dirt and resin he picked up from rubbing up baseballs. ...Pujols, it turned out, was attempting the highly controversial and much feared new pitch, "The Stink Palm". 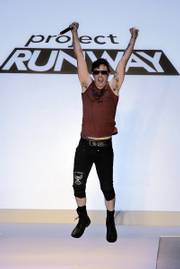 THE WORLD SERIES OF ANOREXIA-Bravo's hit reality television series, "Project Runway," ended its third season with bad-boy designer Jeffrey Sebiela winning the fashion competition. Sebiela-who survived accusations that he cheated by out-sourcing the construction of one of his garments won the finale with his punk-inspired collection. Runner-up Uli Herzner wowed with her tasteful use of flowing prints, while fellow finalists Michael Knight and Laura Bennet didn't impress the judges with collections criticized as staid and repetitive. *...In other news, I swear that I'm not gay.

BUCK FAGHDAD-Nearly 50 faculty members from Fort Leavenworth's Command and General Staff College-a military school for army officers-traveled to Lawrence last week to study Quantrill's Raid, the Civil War massacre that left about 200 dead and most of Lawrence in ashes. The military scholars and historians are hoping to learn from Quantrill's guerrilla tactics and apply those lessons to fighting insurgents in modern warfare. "Looking at what occurred on the border between Kansas and Missouri during the Civil War has great relevance to what we're doing today in Afghanistan and Iraq," said Col. William Raymond, director for the Center for Army Tactics at the college. *...But, as Donald Rumsfeld says, since Iraq is completely stable and is in no way engulfed in a bloody civil war that's waged by insurgents using guerrilla tactics, this is thankfully just an academic exercise. 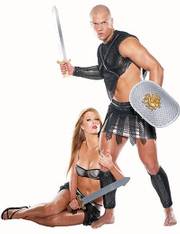 HALLOWEEN KICKS ASS-Halloween was originally a Celtic celebration called Samhain, during which the ancient Celts observed the end of summer and believed it to be a time when the dead could revisit the mortal world. The pagan festival was later folded into Christian tradition and celebrated on the eve of Catholic holiday All Hallows Day, which is always observed on Nov. 1st. Hence Samhain was moved to Oct. 31st and renamed All Hallows Eve, eventually shortened to Halloween. Halloween was popularized in the United States by Irish immigrants who had fled the Potato Famine in the mid 1800's and brought with them their Celtic traditions. Some of those Irish traditions which survive today include dressing up like creatures from the underground, carving pumpkins or turnips, and committing pranks. *...Taking a dump in somebody's jack-o-lantern, slipping into a diabetic coma from eating too many Snickers, or wearing lingerie in public as a "costume," however, are uniquely American variations on the holiday.