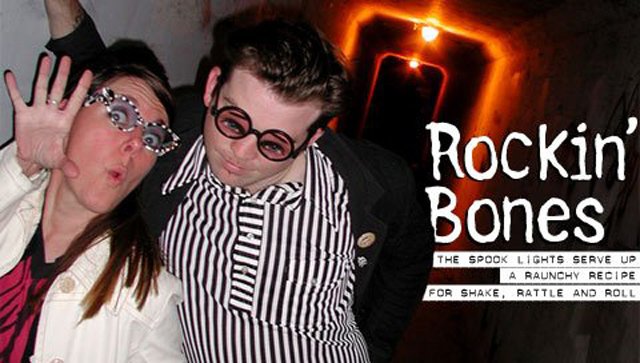 The Spook Lights are Curvacia VaVoom (left), Scary Manilow, (and not pictured) Deathro, and Jet Boy.

Preheat a ten-gallon cauldron over a blazing fire of hemlock boughs, several strips of black leather and two or three datura flowers. While the cauldron is heating, burn photographs of Jayne Mansfield and Richard Simmons, as many as you like. Reserve the ashes in a Tupperware container. When the cauldron begins to smoke, add five heaping skulls-full of rockabilly, a dram or two of surf music (preferably Dick Dale), and a well-rotted soupcon of The Munsters. If you have access to dead reptiles, add them now as well. Stir mixture vigorously with an over-scaled marital aid and bring to a rolling boil. Add the photographic ashes, a gross quantity of rum and a jigger or two of sour mother's milk. Simmer five minutes. Put on a Russ Meyer movie. Serve potion in tarnished goblets garnished with toenail clippings, squid tentacles and pimento-stuffed troll dolls. Warning: potion goes straight to the pelvis.

The Spook Lights' Scary Manilow (a.k.a. Rob Gillaspie, vocals) and Curvacia VaVoom (a.k.a. Kelly Nightengale, guitar) beam down from the planet Sleazetopia into our slime-drenched podcast studio to talk about sex and sex and throwaway culture.

lawrence.com: "Curvacia VaVoom from the planet Sleazetopia." Where did that come from?

Curvacia: On the planet Sleazetopia, where we come from, we're exiled, aging juvenile delinquents. The Spook Lights is really just an extension of our world-this escapist, sleazy universe that we live in inside of our heads. It's about collecting stuff; it's about junk; it's about B-movies and hot pants; it's about surf gangs, knife fights and zombie hookers:

Scary: It's about our throwaway culture. At this point now, anything that's too far out of our consumer culture: people are too afraid to delve into things below the surface. Below the surface of pop culture, there's the sub-pop culture.

Is it a political statement?

Scary: Sure. Well, kind of.

Curvacia: During the '50s-the time that rockabilly originated-that was a very conservative time. All the things that these sleazy artifacts represent is that you really can't take away something that exists. Just because Ozzie and Harriet are on TV doesn't mean that people aren't sexual human beings. :Rock and roll is really all about sex:. It's about the triumph of the human spirit.

The triumph of the human spirit?

Curvacia: It is! You can't repress certain human urges. The Spook Lights is the manifestation of our personal world-the way we would like to live our lives:

Scary: :Despite the constraints society places on us. :"[I Was A] Teenage Werewolf"-that's just an analogy for the horror of adolescent sexuality. And The Spook Lights is an analogy for the mythology we've created for ourselves. We have a real outsider aesthetic between the two of us, and we'd like to share that with the world. :There's always new culture to be mined. Pop culture doesn't evolve in a linear fashion-you have to reach out and grab from all angles. Look at Britney Spears-she's the Elvis of the '90s: although some would argue somewhat less talented. She's just white trash on a banner somewhere.

So you're respectfully mocking?

Curvacia: No. We seriously pay complete tribute to all the things we discuss, with complete affection.

Then are you mocking current values in society?

Curvacia: We feel like everybody should have the liberty to live their lives the way they want to. Even if they want to live a life that's sleazy and cheap and trashy and raunchy, if they want to do that. Why not? As long as they're not hurting anybody else.

Scary: Just because we're expressing that through caricature doesn't cheapen it in any way at all.

Scary, you've always been something of a provocateur around Lawrence-your writing, your band The Donkey Show:

Scary: My first band was called The Pedophiles. :Early on, I thought the best way to get attention was to be really outrageous. But being outrageous for outrageousness' sake-I'm actually kind of turned off by that now. Like, when you're a teenager, G.G. Allin appeals to you, but when you're an adult, you think "That guy's a buffoon." Now I've learned that you can be shocking and still have something to say: To use the Theater of Spectacle to get a message across. I'm not saying we have the deepest message in town, but we're definitely trying to convey something about ourselves.

But The Spook Lights aren't that shocking.

Curvacia: I don't think so either.

Scary: Compared to a lot of Lawrence bands, it's shocking to see a singer moving around onstage and enjoying the music.

Scary, you've made a reputation of being a pretty combative guy. But you've mellowed since you hooked up with Curvacia.

Scary: I've learned how to direct my anger, to pick my battles more carefully.

Curvacia: He directs it towards the sex.

Scary: Ssshhh. :Innuendo is so much better. Sexy underwear has always done more for me than a beaver shot.

Scary: The first thing any religion tries to control is your sexual impulse.

Curvacia: If you can get people to control their sexuality, you can get them to do anything you want. But sexuality doesn't go away: and that's the triumph of the human spirit: [and later:] Although I don't know if that's true for everyone. We're a heterosexual couple, a male-female couple:

Scary: I can't speak for Curvacia but I'm very open about the fact that I've had sex with men. I prefer women, but I just like to get off.

Curvacia: I've had a couple of ladies.

Curvacia: No. Right here on Earth.

You're just saying that because you're going to dress as the Crow for Halloween and don't want anyone else to steal it from you.

They could interview your bitter ass.....obviously if they are interviewed for a magazine there is some interest....personally, I am very happy that these two started this band....i had pestered rob in the past about doing a billy act and am overjoyed kelly and him are making FUN music.

The only people I've ever known who called themselves "Cat" were fifteen-year-old girls christened Catherine who played Vampire: the Gathering and didn't think "Black No. 5" was ironic.

Aren't you the one who cut down the cedar archway and dug up our cat's headstone? You obviously have a vendetta against anything stylish and cool Lawrence might have to offer-- So off with you! Go back to your self-absorbed, affluent wonderland... Continue beating your wife, drinking your wine, and driving your ugly car... Just keep your opinions and actions as far from us as possible. You are hereby BANISHED from our sphere of consciousness, and any attempts to re-enter will surely result in a swift (but painful) execution of your ego. So it is written, so shall it be done.

Omigod, I have the HUGEST boner for Curvacia. Okay, so it's latex, and I keep it a drawer, but it is HUGE. So huge it's still in its packaging; I have nightmares about using it that strangely morph into memories of childbirth.

That's how cool you are, Ms. Vavoom.

Or guys who dress as the crow for halloween.

That cat fella sure talks big for a guy with a penis- shaped head.

Sleaztopia is right. You're not shocking; and no one wants to hear what you have to say. We've heard it a million times. Is there really nothing else going on in Lawrence?

uhhh i don't know about anyone else, but i seriously feel like throwing up a bucket of fun whenever these assholes play. i love you spooklights. call me.

Actually, i think the hot thing this year is the "gothic, vampire metro, pirate" look.......