Sure, Spanish tapas are delicious. But Merche Martin Cereceda likes the foods just as much for what they represent.

"It's the perfect excuse to go meet people in bars and socialize," says Martin Cereceda, a native of Madrid who is a visiting scholar at Kansas University. "This is well-known because it allows people to socialize and make friends. It's very interactive."

Tapas are a staple in Spanish bars and are designed to tide over patrons until dinner, which is usually between 9 p.m. and 11 p.m.

The snack foods are meant to be grazed over wine or beer. But that doesn't mean they're simple foods, like the pretzels or peanuts you might find in American bars.

In Spain, tapas are often given for free when bar patrons are drinking.

But a restaurant in Lawrence has the food as the centerpiece. Ole Tapas opened seven months ago at 1008 Mass.

"The biggest challenge is that when people hear 'Spanish food' they think it's Mexican food," says Mekedem Belete, the restaurant's owner. "But this is European Spanish-style." 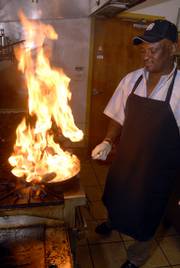 Belete, a native of Ethiopia, owned Addis Ababa Ethiopian restaurant at the same location before he decided to change genres. When he made the switch, he hired a Kansas City-area chef and native of Spain to teach him how to cook tapas.

"Any food is about the sauce - how you make the sauce," Belete says. "Anybody can make food, but not everybody can make a sauce. Each dish has its own unique flavor."

Many of the Spanish dishes, he says, involve aioli, a sauce made of garlic and oil. Others have chile sauce, parsley and other ingredients.

Some of the top-sellers at Ole Tapas are kalamari and meatballs. But he says customers order a variety of the 30 items on the menu, which include mushrooms drizzled with basalmic vinegar, marinated shrimp skewers and fried potatoes with sauce.

Often, a table will order three or four tapas and share them.

"They stay late," Belete says. "Pretty much every table is drinking wine."

Belete says he knows of two tapas restaurants in Kansas City. He says he thinks the foods eventually will become popular in the United States.

"I think it will catch on," he says. "It's health-conscious. The food is less fattening. They are just not used to it yet."

Martin Cereceda, who has been in Lawrence two years, says she also thinks tapas will become more common in the United States. But she worries Americans will think that's all Spaniards eat.

"Some people think Spanish food is tapas," she says. "We do sit down and eat properly, like a roast."

Her own personal favorite tapas are stuffed olives.