Bad: Too simplistic for hardcore gamers, graphics that border on offensively bland

Clubhouse Games, a collection of over 40 Ritalin-popping games that range from solitaire to darts, is the latest entry in Nintendo's Touch Generations series for the DS. If you've played previous installments of Touch Generation games(including the wildly popular Nintendogs and Brain Age franchises) you should have a good idea of how Clubhouse Games fits into Nintendo's pick-up-and-play philosophy.

It's a game that's meant to appeal to gamers of every stripe. Five year old girl who enjoys checkers? Covered. Seventy year old grandparent too enfeebled to go bowling but who still longs for simulated ten pin glory? Done. Caucasian male aged 16-35 who compulsively plays Halo and World of Warcraft to the point that they urinate in a jar? Maybe not so much...

Clubhouse Games is a fun but ultimately unfulfilling assortment of the kind of time-wasting Flash games you typically hide from your boss at work, only now conveniently gathered on one cartridge. Each game is operated entirely by the DS stylus to varying degrees of success. The card and board games are very intuitive on the touch screen, but bowling and billiards feel cramped on the tiny display. 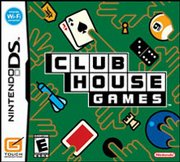 Graphically speaking, Clubhouse Games is about as exciting as watching Mormons have sex...it's not flashy, but it gets the job done. The vibrant colors and cartoony characters usually expected from Nintendo are eschewed in favor of basic game pieces and drab backgrounds. The music and sound effects are functional but quickly become tedious. The only real flourish is when you can select an animalistic avatar during the game setup (being a Cancer and suffering from genital parasites, I selected the crab).

While the game's narcotic pull may not destroy your marriage, the simple yet addictive gameplay coupled with online functionality via Nintendo's free WiFi service does make for high replay value. Clubhouse Games looks as bland as moist toast served on a Thomas Kinkade painting, but it delivers the goods on accessible gameplay.