Capote's story is compelling, yet again 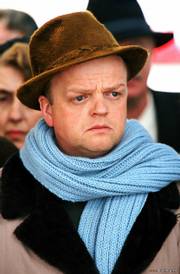 Truman Capote (Toby Jones) spends six years investigating the murders of a Kansas farm family for his true-crime novel, "In Cold Blood," in the biopic "Infamous."

The first shot fired in the battle of the dueling Truman Capote biopics hit the bull's-eye. Last year's "Capote" was a tense, powerful drama focused tightly on the reporting of "In Cold Blood." Now comes the new Truman show, "Infamous."

Douglas McGrath's film provides a broader portrait of the author and his circle during the six years he spent investigating the murders of a Kansas farm family for his true-crime novel. In its own, very different way, it also is quite good, encompassing both the horror of the Clutter family's killing and the malicious wit that earned Capote his rank as confidant to New York society's smart set.

More about Truman Capote and the Clutter murders

It remains a compelling story. A promising young writer immerses himself in a once-in-a-lifetime project, forms an intense emotional bond with a killer, and emerges as a literary superstar and a damaged human being.

In the movie, Capote's childhood friend, novelist Harper Lee (Sandra Bullock), observes that writers "die a little, getting it right." "Infamous" shows Capote, an intimate of celebrities and royalty, unable to get drab dirt farmers and apron-wearing housewives to open up to him. Jones, who has Capote's diminutive physique and mimics his distinctive nasal drawl precisely, is wonderful in these scenes. Frustrated and a bit insulted (the locals initially call the eccentric, androgynous dandy "lady"), he seduces some sources with gossip about Humphrey Bogart, unbuckles his armor with others to share his own insecurities, flatters some and lies to others.

Compared to last year's Oscar-winning "Capote," "Infamous" provides a broader portrait of author Truman Capote (Toby Jones) and his circle during the six years he spent investigating the Clutter family murders for his true-crime novel. In its own, very different way, it also finds a satisfying balance between the story's tragic and comic elements.

Chief among those he deceives is imprisoned murderer Perry Smith (Craig). Capote must persuade the wary killer to open up in order to make him a lifelike character in his book. He uses their similar backgrounds of childhood neglect to create a sense of trust, one misfit to another. It's a one-sided relationship, with the biographer retaining the upper hand, promising help in the effort to commute Smith's death sentence in exchange for his cooperation. But without Smith's execution, the book has no climax. Capote is willing to make that sacrifice. After all, through the book he'll be immortal.

McGrath, who co-wrote "Bullets Over Broadway" with Woody Allen, finds a satisfying balance between the story's tragic and comic elements. The film has more bounce in its step than the slow, grim "Capote," but it's honest about the wasted talent, alcoholism and personal disintegration that followed the bestselling triumph. Far from vanishing in its predecessor's wake, "Infamous" demonstrates how a potent story can inspire distinctly different interpretations.