Funniest Line: "Run for your life, it's Charlie Watts!"

Last year's Destroy All Humans was an entertaining, albeit flawed experience. Taking the sandbox gameplay of Pandemic's Mercenaries and throwing in a 50s alien invasion twist created some humorous and fun moments. This year's title takes us a decade further, into the era of free love and even more Red paranoia.

Improvements have been made this time around, but not enough to make it a truly immersive open-ended game. Mercenaries and the Grand Theft Auto series did a fantastic job of giving the players endless options for gameplay. Destroy All Humans 2 has a few side missions and collectibles, but not quite enough to escape that semi-linear feel.

Missions aren't terribly unique, and most involve destroying a certain amount of things or killing someone. Despite this, you can exercise a good amount of creativity in how you go about doing it. Let's say you need to destroy a large amount of security cameras. You can run Crypto along on foot, taking them out from afar with your disintegrator ray, or you can board your saucer and death-ray them all into oblivion. 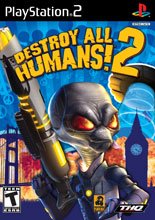 Crypto has access to a large amount of upgradable weapons, and many of which are hilarious. My personal favorite was the Dislocator, which shoots out what appears to be a pink Frisbee. Once attached to a person, vehicle, or inanimate object, it causes them to fly around in entirely random directions. It's a blast to shoot this at three double-decker busses in England and watch the mayhem.

Another great aspect of the weapons is the means of acquiring ammo. Instead of finding randomly-placed ammo packs or powerups, you "transmog" inanimate objects, which basically crushes them down and converts them to ammunition. Thanks to this, you're never far from an ammo source.

The environments are varied, but most feature a kind of muted, bland look. Crypto looks and animates great, but the various pedestrians look unnatural in their movements. Some effects look great, such as the building-leveling Meteor Strike attack.

Weapons and other effects sound great, and the voice acting is superb. Crypto still has that Nicholson/R. Lee Ermey rasp, and it's as funny as ever. Despite the quality of the acting, Destroy All Humans 2 has entirely too much dialogue. It's a fun action title, it really doesn't need dialogue rivaling the amount in Metal Gear Solid 2.

DAH2 is a better game than the original, but not by a substantial amount. With some more immersive gameplay, this could become a fantastic franchise.