AKA: The Nelson Muntz Experience

If there's one thing that Rockstar has proved, it's that they're a company that's not afraid to take risks. They've put out successful and well-received games based on concepts that most other companies would never have the balls to try out. A ping pong game? A game based on a 1979 cult film? Both sounded like crazy ideas, and both ended up being good gaming experiences. Now, Rockstar takes gaming to another unique arena that hasn't been seen before boarding school.

The setting is the true star of Bully. It may run on the same engine as GTA and feature some similar gameplay elements, but Bullworth Academy provides a completely unique and entertaining backdrop. Rather than sending you to a crackhouse with a shotgun, Bully sends you to the girl's dorm with a carton of eggs.

Instead of rival gangs within a city, Bully features rival factions within the campus. Based on your actions, you will gain or lose respect amongst the Preps, Nerds, Greasers, and Jocks of Bullworth Academy. Objectives are clever and interesting, and you'll do everything from scattering marbles all over the football field to placing a flaming bag of dog feces in front of the teacher's lounge.

Outside of the numerous story missions, there are countless other activities. Each day gives you the opportunity to attend two classes, including English, Chemistry, Shop, Art, and Gym. Upon completing each of the five lessons per class, you'll upgrade one of your abilities. 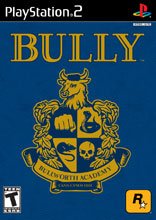 There are countless minigames within Bully. You can go to the gym and play dodgeball, perform favors for other students, attempt to woo the opposite sex with flowers, and pull pranks on Halloween.

The level of immersion is truly impressive. You can play arcade games around the town, make snowballs in the winter, drop firecrackers in the toilet, and pull fire alarms in school buildings. If you feel like being a true bully, you can shove kids into trash cans or give them swirlies.

Combat is primarily hand-to-hand, and resembles The Warriors more than Grand Theft Auto. In fact, it's probably the best fighting system in any Rockstar game. A homeless war vet will teach you new moves in exchange for radio transistors, and you can learn grappling maneuvers while wrestling in gym class. The only hiccup in the system is that it's too easy to accidentally hit characters that are on your side. Many situations will require you to defend nerds from attackers, and it's frustrating to fail missions because an uppercut hit the wrong character.

Outside of this fairly minor issue, I only have a couple other complaints about Bully. The camera tends to get a little wonky in close-quarter environments, and the few stealth-based sections are unnecessarily difficult. One mission late in the story involves sneakily breaking into an asylum, and is probably the most annoying part of the entire game.

Bully features a great art style, filled with well-designed characters and an interesting environment. Despite this, it would have greatly benefited from some next-gen hardware. There isn't a terribly large amount of characters onscreen, and many feature some slightly awkward animations.

Voice acting is top-notch and fits the feel of the game perfectly. Caricatures of authority figures have appropriate voices, and some of the parodies of student stereotypes are hilarious. Rockstar has always featured some killer soundtracks, but they've outdone themselves with Bully. Subtle at times, energetic at others, every second of music fits the scenario perfectly. The track during the campaign speech is one of my favorite pieces of original game music in a while.

Bully is a wonderfully unique title that offers many hours of entertaining gameplay. Rockstar once again takes gaming to uncharted territory, and it has paid off. If you've ever enjoyed a GTA game or The Warriors, this is a title that shares their level of quality while remaining entirely original.

I'm a fan of the 70s style chase music that plays while you run from a Prefect.