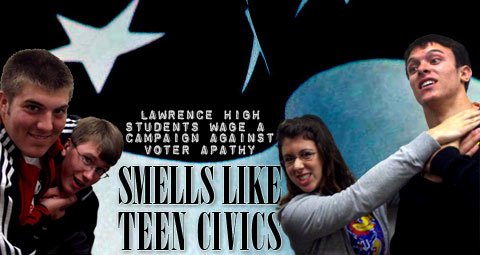 If you follow politics closely, or even at all, you're more than likely a cynical bastard. Disastrous wars, sexual predators in Congress, corruption and graft that would make Boss Tweed weep:such is the Machiavellian manure heap that passes for our government these days. Throw in a public discourse that consists mainly of Rush Limbaugh's bloviating jowls and Alan Colmes' neutered-burn-victim whining, and you've got a recipe for full blown voter malaise.

Considering all of this, you would be forgiven if any hope you had invested in American democracy had taken a detour through Chappaquiddick and drowned in shallow water.

Julia Barnard sympathizes. "I would say, in general for the public, everyone is obviously disenchanted with the government. Mark Foley--in the past, Vietnam and Watergate--it's wrought with scandals, the whole political system."

Julia's bleak assessment is typical of the electoral mood amongst voters:except for the fact that Julia's only seventeen. This would seem to be a revealing indicator of the decline of participatory government, when even those who can't yet vote are this pessimistic about the political landscape in which they live. Also unlike the typical voter, however, Julia's not content with just sitting on her ass and bitching about how bad things have become. 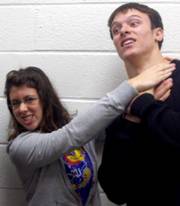 "We're just trying to do everything we can to get the kids who are old enough to vote to the polls," says Julia. Now doesn't that make you feel like a lazy douche?

Julia is a member of Lawrence High School's Young Democrats, and along with her fellow young politicos, they're hoping to change the perception of teenagers as glue-sniffing political cretins. Through voter registrations drives, direct mailings on behalf of candidates and a whole slew of other activities, these whipper-snappers are doing their best to perish that ill conceived notion. In the process, they may just inadvertently shame the rest of us into rising above the petty, partisan fray.

"A bunch of what we're doing here isn't necessarily that we want people to vote Democrat or Republican," says LHS Democrat Sam Huneke. "We want people to be informed about who they want to vote for." To advance this information campaign, Sam and his fellow Democrats have attracted big-wig Kansas candidates such as Dennis Moore and Nancy Boyda to speak at LHS.

LHS Republican Dan Bentley would also like to get beyond divisive politics. "What I've realized among students is a lot of the kids are into the social issues such as gay marriage and abortion," says Dan. "But I think there are a lot more important issues out there. One of the issues that really got me into politics is Social Security:will I get it when I'm older?"

Dan's Republican teammate, Nick DeBiasse (they both happen to be on the LHS football team), also expresses concern about the ability of us geriatric nincompoops to not completely ruin the country for them. "Currently, we allow the older generations to vote on topics that effect everyone, so I think we need to be more involved to make sure our opinions are heard," says Nick. "People need to realize that their voice is important." 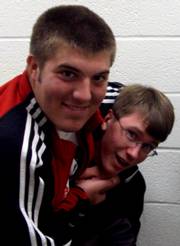 Although Nick does concede that being politically active in this poisoned election season can be disheartening. "You kind of have to find the lesser of two evils."

Sam sees it as their mission to make that kind of thinking obsolete. "I think a lot of people our age aren't informed and they don't really have an opinion on anything. The one opinion they might have would just be that government's bad," says the young Democrat. "As Julia said, they're disenchanted with government, and I think that's an image that people like us who are actually involved with politics have to break:we need people to be informed and involved in politics."

These kids are definitely up to the task of informing their peers. Pressed for stances on specific issues, they're savvy and well informed. Strikingly, though, they found more common ground on the issues than not. Most of their differences were semantic, with Julia calling for a "phased withdrawal" out of Iraq and Dan in favor of "troop withdrawal over time" (the one clear division between the parties was on the topic of the smoking ban; Republicans made libertarian arguments and voted "Nay", Democrats cited the greater good and voted "Yay").

Comity and increasing political activity are their primary goals, and their good-natured political enthusiasm seems to be spreading like Mono amongst their classmates. "It's just amazing how I'll start debating those people over current elections, local elections, national elections:it'll be amazing how many people will want to jump in," marvels Dan.

"I would say we don't have time to be disenchanted," urges Julia. With the Iraq war, massive deficits and a bitterly divided electorate looming ahead of them, she and her classmates believe that their generation can't afford to sit on the sidelines when it comes to politics any longer. "Because it really does effect our lives."