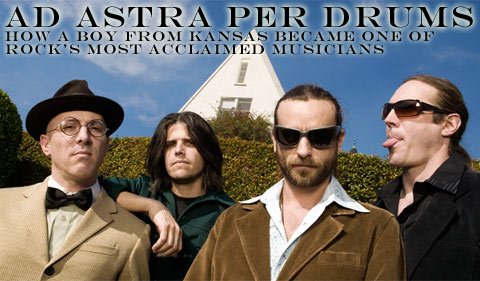 Born and bred in Kansas, Danny Carey was a typical small-town kid: he scrapped with his brothers, he played basketball and he joined his high school band.

After being born in Lawrence, Carey excelled at drumming from an early age. At age 13, now living in Paola, he began lessons on the drum kit; by 17, he was playing with jazz bands. He passed on a scholarship to the Conservatory of Music in Kansas City, spent a few years studying drums at UMKC, and then headed west to Los Angeles.

As with all aspiring musicians newly landed in L.A., Carey worked a day job - in his case, at a tape duplication studio - and sought gigs in the clubs at night. He did session work for Carole King, played '60s covers for a short-lived TV sitcom and drummed for the outrageous and litigiously handicapped shock-band Green Jelly.

His neighbor, Maynard Keenan, was also trying to get a band together. Carey offered Keenan the use of his practice space and the rest is history. In 1990, Carey, Keenan and guitarist Adam Jones became Tool.

Six albums and 25 years later, Tool is one of the world's best-selling and most provocative hard rock bands. Their virtuoso performances are praised as loudly as their dark and mystical image is decried.

Former Lawrencian Danny Carey phones in to our black leather-lined podcast studio to catch up on hexagrams, Mandalas, surfing, Volto! and The Pigmy Love Circus - all things near and dear to a Kansas boy's heart.

lawrence.com: You were born in Lawrence. Any memories?

Carey: Not many. Actually, I have memories of my dad taking me to the library and playing some classical music for me when I was a little kid. But I was about three or four years old, probably, when this was going on. Then I moved to Paola shortly after that.

Carey: Yeah, I played in the school band and whatnot. I got my first kit when I was about 12 and then just started studying, taking lessons all the way through university.

Carey: It's pretty much the same thing I've been using for the last few years. I have a basic acoustic kit with a couple of bass drums and four toms. I have a lot of electronic stuff surrounding it that I use to do different textures and accents with. I can load any samples I want into the electronic pads and it's a nice complement to the rest of the kit.

You've got an established system for set-up, right? Based on certain geometric principles.

Carey: It's mainly what's kind of harmonious with your proportions and your body. What you feel comfortable with is the most important thing, you know - rather than getting too crazy into the occult world about it.

Good, you brought the word up. Most of the time in the media when people are referring to Tool, they bring up - and misuse, I think - the words "esoteric" and "occult."

Carey: The word [occult] simply means "hidden." Back in the olden days... any scientist or anybody that had knowledge of astronomy, mathematics or anything, they had to be very secret about it. One of the symbols that they used was a pentagram ... the symbol of hidden knowledge. But because scientific knowledge has always had a few run-ins with the church ... the church deemed the pentagram the symbol of evil.

Drumming at your level is something of a spiritual conduit, isn't it? Some kind of meditation.

Carey: It kind of has to be at that point. I think it's true of any discipline. If you go so far into it and do it for so many years, it becomes a meditation thing ... You're free to look at yourself as a musical instrument ... It's very revealing - and frustrating at times, too.

Thank goodness for the internet - it's starting to break down the ivory towers of the major labels and it's changing the face of music.

Carey: A lot of kids now don't even know what a record store is now. They just download everything off of the internet. A lot of it they pay for, a lot of it they don't. It comes down pretty much to a matter of respect. If it all falls by the wayside, then musicians will have to actually go out and play again, have to do it live. And that's one thing I feel good about our band - we've always been able to do it live as good or better than in the studio. So I don't think it'll have too big of a ramification on us.

Five years between "10,000 Days" and "Lateralus" - but you were busy. You had all kinds of projects going on.

Carey: Right after "Lateralus" came out we toured for two years. Then we decided to take our sabbaticals from each other - go out and learn a new thing or two so we'd have something to say next time we got together ... The last thing we want to do is repeat ourselves. ... Then it took about two years to make it [10,000 Days] ... The five years goes by pretty quickly.

One of the remarkable things about Tool is that it's a true collaboration, where each member's character, interests and skills are essential to the whole. And that's consistent with old prog rock theory. Does Tool have any problem with being called a prog rock band? (Read Street Level blog on prog rock.)

Carey: I don't at all. Those were the bands I love - Genesis, Yes, King Crimson, ELP ... I think it's the reason we've stuck with our composition methods. We all still get in the room together and just have long, freak-out jams, you know. We have a recorder rolling and we go back over all the hours of all the stuff we've recorded and find all the little jewels that pop up, then piece those together in different arrangements ... We really are all in there writing together.

Are there any aspects of your time here in Kansas you feel have informed the man you are and the work you do?

Carey: I give a lot of credit to where I grew up, definitely. For me, it was hard to imagine growing up in California when I moved out there ... almost 20 years ago. I probably would have just wasted away on the beach. There's something to be said for being snowbound for two or three months ... I just had nothing to do but shed on my drums.

The last three times I've been in Hawaii, I've gone surfing. I'm almost at the point I'm willing to try it in California now. It's a lot more difficult: the waves break shorter.

Carey: When we go out of the country, the thing I miss the most is Mexican food. Mexican food rules in L.A. I also eat a lot of steak and seafood, at Morton's usually.

It's hard to surf and eat seafood in Kansas.