Scott McMichael admits he often sees the colorful hallway wall simply as a way to get to his office.

But there are special times when he walks by the mural at Bert Nash Community Mental Health Center, which was painted by Lawrence teens, and admires it.

"I'm probably used to it, because I go up and down that hallway so much," says McMichael, Bert Nash's director of community development. "But every once in a while, something will catch my eye, and I'll say, 'I never noticed that before.'

"It is probably more of a comforting situation as opposed to a big, blank wall. Sometimes you walk into offices and it's kind of sterile."

There are walls all across the state - on the exterior and interior walls of downtown brick buildings, churches, silos, mental hospitals, park restrooms, libraries, museums and just about any other structure you could imagine - that are decorated in artwork.

There are paintings, tile mosaics, carvings and other media.

Those large-scale artworks - defined broadly, as to not leave any art out - are the focus of "Kansas Murals: A Traveler's Guide," a colorful new book by a pair of Lawrence artists and published by the University Press of Kansas.

An employee at the Dodge City Cooperative Exchange works beneath a mural painted by Dodge City resident Ted Carlson. The mural is one of hundreds highlighted in the new book "Kansas Murals: A Traveler's Guide" by Lawrence residents Lora Jost and Dave Loewenstein.

The book, written by Lora Jost and Dave Loewenstein, features photos and histories of nearly 100 Kansas murals. The appendices include information on hundreds more murals, so that about 700 artworks are mentioned in all.

"Over the years, traveling across the state to do my murals, I came across dozens and dozens of really exceptional murals by other artists," Loewenstein says. "I think the book will shed light on a whole new group of important artists who have done major works in the state.

"I hope it will also encourage people to rethink where they go to see art. We usually think of the museum or gallery. These (murals) become to the viewer in civic spaces where lots of other activities are going on at the same time. They are integrated into the urban and sometimes rural landscape in a way that gallery and museum pieces are not."

Most Kansans may be familiar with the murals in the Statehouse by John Steuart Curry, but they're probably not as aware as, say, the depiction of Napoleon in the Brown Grand Theater in Concordia, or the depiction of a steam-engine arrival at the Herington Post Office.

"We think we did a good job getting a good sample from across the state," Jost says. "But we don't try and pretend that we have everything. We have a pretty good look, but we missed some clearly."

The idea for the book came from an art conference in Nebraska about five years ago, where participants decried the lack of documentation about Midwestern murals.

Jost and Loewenstein, both muralists in their own right, decided to take on the project for Kansas. They say similar books exist in some other states, but this is the first for Kansas.

"It would be a good companion book to take with you if you're traveling the state anyway," Jost says.

Jost says she and Loewenstein started with records of murals from the Kansas Arts Commission and Works Progress Administration, then started making phone calls to city offices and chambers of commerce to find more murals.

"It just got started with word of mouth," she says.

Name a type of flat wall, and Marjorie Hall Bicker has probably painted a mural there.

She's painted more than a dozen murals on the side of buildings, an airplane hangar, a historical society building, a park restroom, a warehouse, a gymnasium and other locales.

The unifying goal, she says, is murals must connect with a particular place.

"With smaller towns in particular - and Lawrence is very progressive as is Kansas City, where the murals are more far out and more modern in focus - but the little towns where the Wal-Marts and fast foods are taking over the outskirts, the downtowns are slowing down in a big way," says Bicker, who lives in Winfield, in south-central Kansas. "I think the mural that focuses on the community identity is sort of centering." 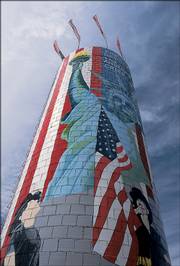 Karen Lewis, rural Abilene, painted her farm's silo to be a memorial to those who died in the 9/11 terrorist attacks. The mural is one of the artworks featured in the new book "Kansas Murals: A Traveler's Guide."

That's why, she says, most current small-town murals focus on community history. It's gotten to the point, she says, that "I've painted the same damn prairie locomotive 15 times. If they ask for it, they're not getting it."

She admits some murals are more a reflection of a community than others. Sometimes, in public spaces, she works with a committee to get the correct feel for a particular space.

One she's working on currently, which involves re-tracing vintage automobiles on the side of an auto-body shop, isn't quite the same process.

Jost says the art of mural-making is tied to a particular place much more than any hung-on-the-wall art is. Doing research, she started to see a divide between murals in big town versus small cities.

"I think a lot of what you see in small towns is an excitement of telling the story of what we were, how we came to be and how we blossomed," Jost says. "There's a bittersweet element in that, because a lot of communities are trying to figure out how to continue now."

One example of a mural fitting in that category might be the rainbow-painted building in Vermillion, a town of about 100 two hours northwest of Topeka. A local artist, JoAnn Dannels, decided to spruce up the downtown area, at first by weeding the downtown sidewalks and later by painting buildings.

"It seems like murals talk about identity, and that has to do with how murals have to be connected with place more than something you hang on a wall," Jost says. "It's more about celebrating that particular place."

Children play at Cordley School, 1837 Vt., with Dave Loewenstein's mural "A Thousand Miles Away" towering overhead. The mural is one of several Lawrence artworks highlighted in "Kansas Murals: A Traveler's Guide," written by Loewenstein and Lora Jost.

"It's a great idea to document them," she says. "The sad thing about murals is they disintegrate over time, and to restore them takes money. Some people don't value them, or recognize the value, and people paint over them."

The book's authors say the biggest portion of Kansas murals were painted as a result of the Works Progress Administration in the late 1930s and early 1940s, and during a resurgence in murals in the 1980s.

"There's this whole question about what is pubic art, and how does a community decide what's appropriate for the community," Crain says. "If there's a story we want to tell, and if it's important, and if we're going to commission an artist, there's a tremendous value in that democratic process through the inception of it."

Loewenstein says he hope the "Kansas Murals" book broadens the definition of good Kansas art to include even those democratic artworks - and not just pieces hanging in museums.

"Our book includes beautiful and important murals by children, students, amateur artists and untrained volunteers - not just highly trained professionals," he says. "Who's work is more important? Well, we hope readers will go and see for themselves."