To the average non-gamer, I'd have to imagine that no series of words in the English language could sound as nerdy as "LEGO Star Wars." If they think LEGOs and Star Wars are nerdy, they've got to think that a videogame based on this concept is the absolute epitome of geektitude. What they don't know is that it's actually a great gaming experience.

The original certainly sounded like an odd idea when most gamers heard of it, but it ended up selling extremely well and earning some critical praise. LEGO Star Wars II features all the great gameplay and humor that the first exhibited, but is based on much stronger source material (the original trilogy).

It's amazing how much of a difference is made by basing the game on A New Hope, The Empire Strikes Back, and Return of the Jedi. It's all here Jabba's Palace, the Death Star trench run, Han and Chewie on Endor, even a boss battle with Boba Fett. Playing through the movies we all know and love is exponentially more entertaining than recreating sub-par moments from the tremendously disappointing prequel trilogy. 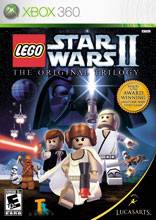 Once again, the gameplay is extremely simple and mainly relegated to the face buttons. Characters can attack, jump, use the Force, and build LEGO structures. It's certainly nothing fancy, but the simple control scheme actually lends itself to a more old-school feel.

This installment features a few more puzzle elements than the original, but don't expect any Zelda-level complexity. They're mainly of the "push this block over here" variety. Some missions (Hoth, both Death Star battles, speeder chase, etc) place you in control of a vehicle, and a couple are the weakest points in the game. The Battle of Hoth, for instance, features a very odd camera angle and initially awkward controls. The only vehicle-based area I truly enjoyed was the speeder chase in Episode VI.

While I don't quite understand why it's not available over Xbox Live, the co-op play is certainly the most rewarding aspect of this title. A second gamer can just pick up a controller mid-game, play for a while, and drop out with no disruption to the gameplay.

In some areas, it's fairly hard to tell exactly what you're supposed to do or where you're supposed to go. One area might require you to build a structure of some sort, but it's not even remotely apparent how to go about this as necessary blocks are occasionally hard to see. There was more than one occasion in which my character fell into some sort of glitch or inescapable area and I had to restart.

There is absolutely nothing that needs to be changed with the art style of LEGO Star Wars. The characters and vehicles look like authentic LEGO models, and the backgrounds are pure Star Wars. There is, however, some graphical issues that are made even more confusing thanks to the fact that it's powered by the Xbox 360. Slowdown and graphical glitches are not something I expect from such simplistic graphics on such a powerful system. If the 360 can handle the photorealistic face of Muhammed Ali in Fight Night, there's no excuse for problems when the faces are yellow squares with black dots for eyes.

It would be hard to mess up the audio in this game, as they clearly had access to the vault of sound effects we've heard in every goddamn Star Wars game for the last decade. Lightsabers sound like lightsabers. Blasters sound like blasters. The unmistakable John Williams score is still here. Voice acting isn't present, however, as it's replaced by mumbling and grunts (much funnier).

Equal parts nostalgia act, comedy routine, and solid videogame, LEGO Star Wars II is a very entertaining title. I'd have to imagine a lot of the experience would be lost if you're not a big Star Wars fan, however. So much of my fun with this game was based on how they re-imagined all the scenes I've seen countless times. Regardless of whether you're a fan or not, the gameplay (especially co-op) makes it a worthy title.