Number of Mega Man titles: must be nearing 8 million

Mega Man ZX doesn't reinvent the wheel of the (very) long-running MM series, but it does manage to throw in some new elements. Rather than playing as a robot Maverick Hunter, you now play as a human who has stumbled across "biometal" that transforms him/her. It has also done away with the standard "stage select" progression seen in the many NES titles and SNES MMX games. One of these changes is nice, the other is frustrating as hell.

Players can choose as a boy named Vent or a girl named Aile at the outset. The story is typical Mega Man fare, and there's a bit too much of it. This series has always been renowned for its platforming and action, and I'd prefer more of that over more story any day of the week. Some sections are presented in full-motion anime style, and these actually look very nice.

Rather than the typical "which stage do I want to go to next" system, Mega Man ZX has opted for a more Metroid/Castlevania-esque sprawling map. Unfortunately, it doesn't seem to realize that the latter titles were hugely helped out by a competent map system. To call ZX's map bare-boned would be a compliment. It simply shows basic areas, with no individual rooms or indication of how they connect. Imagine playing Super Metroid if the map only consisted of the entire planets, not the pathways within. 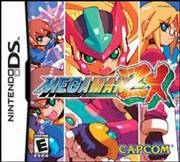 This can be the root of many annoying moments. Mega Man ZX is a very tough game, and it's terrible to fight through an especially taxing area, only to find it doesn't connect to the area you're attempting to reach.

As you progress, you'll collect more biometals to morph into. Each performs uniquely, with some being blaster-based, and others focused on a saber. As to be expected, certain situations will require the use of a certain biometal. It's a nice twist on the standard Mega Man weapon system, and it works well.

Thankfully, the game doesn't rely on touchscreen gimmicks, as you'll rarely use it (similar to Dawn of Sorrow). Considering how little the bottom screen is used, it makes me wish for a competent map even more, as it would have been perfect down there.

I've always enjoyed the Mega Man art style, but ZX pretty much looks like it could belong on a GBA. Bosses and anime cutscenes look nice, but it's not much that we haven't seen before. As always, Capcom has provided a catchy soundtrack for the Blue Bomber to blast to.

I appreciate the effort made to add some new elements to this massive franchise, but all in all, it certainly feels familiar. I can't stress enough how much this game would be improved with a simple map upgrade, as this was the source of most of my frustration with ZX. As is, it merely adds a couple new features to a series that is starting to show some age.