Or so thinks his Democratic challenger, Paul Morrison

Taking the pulpit in a Topeka church recently, Kansas Attorney General Phill Kline didn't so much blur the line separating church and state as he did snort it like a pound of finely cut blow.

Using the razor's edge of the first amendment to divvy up that pile of sanctified flake, Kline delivered a sermon at The Light Of The World Church. Its pastor, Greg Varney, dutifully pointed out this was not a political rally. According to the Lawrence Journal-World, the attorney general lectured the congregation on moral relativism, clapped and sang, quoted Bible verse - perhaps everything short of cure a leper.

Kline then stopped handling snakes long enough to speak with reporters about his reelection effort. Again, not a political rally...

If the image of an elected official doing his best Benny Hinn impersonation on the campaign trail gives you pause, then you're sharing pew space with slack-jawed Johnson County District Attorney Paul Morrison.

"It's unfortunate that any candidate would want to use institutions like churches in that fashion," says Morrison. "It's too bad."

Morrison is Kline's tough-talking Democratic opponent who took the drastic step of switching parties in order to take a shot at unseating Kline. And Morrison has a new weapon in his campaign arsenal. Or didn't you get the memo?

An anonymously leaked memo written by Kline, in which he lays out an anally detailed strategy of taking financial advantage of his many sermons, has gone off in this campaign like the Holy Hand Grenade of Antioch.

"The Goal And Objective-numbers," commands the AG to his staff, who reverently refer to Kline as "The General," and whose battle plan is to maximize those "numbers" by currying favor with conservative Christians and their leaders in order to ply them for financial support.

It's certainly nothing new to Kansas politics (hell, it's a strategy virtually plagiarized from Thomas Frank's book "What's The Matter With Kansas?"), and Kline spokesperson Sherriene Jones is quick to point out that even Morrison has spoken at a church in Lawrence, but the concerted effort to use houses of worship to pass the political collection plate has never before been laid so bare as in Kline's memo. 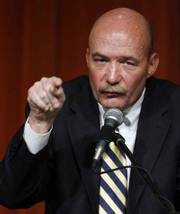 "Get the pastor to invite 5 'money people' whom he knows can help," writes The General. "Goal is to walk away with contact information, money and volunteers and committee in each church."

In reference to preachers Terry Fox and Joe Wright, who spearheaded the effort to outlaw gay marriage in Kansas, Kline sees them as allies in his fight against Wichita abortion provider Dr. George Tiller. "Must get in their pulpits and have them personally host a reception to match Tiller's blood money."

The memo has gained national attention, with Washington, D.C., watchdog group Americans United for Separation of Church and State calling the campaign tactics "outrageous and irresponsible," possibly putting the tax-exempt status of churches where Kline speaks in jeopardy.

To Morrison, Kline's relentless electioneering has in itself become a campaign issue. 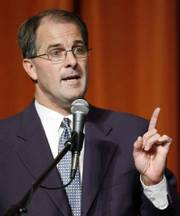 Morrison has spent 18 years as the Johnson County District Attorney, and has the hard bitten rhetorical swagger of a "Law & Order" episode to prove it.

"I have extensive experience in trying bad guys, convicting them, and putting them in prison," boasts the DA. "I've probably put more people in prison than just about any other prosecutor in the state."

And he's not afraid to use that Sam Waterson-on-steroids patter against Kline.

"Phill Kline has at least two people on staff right now that have criminal records. Bryan Brown, head of the Consumer Protection Division, has 12 prior arrests, currently owes $61,000 in federal fines, which he apparently refuses to pay. Kline hired his nephew Brad as his driver, who's on probation for drug possession and has a suspended driver's license. Those kind of judgment errors are inexcusable."

Sherriene Jones responds that Brad Kline hasn't worked for the AG's office in two years and that Bryan Brown was arrested for "exercising his first amendment rights to express himself - the same as Martin Luther King Jr. and Rosa Parks." Brown was repeatedly arrested for his anti-abortion protesting.

The "church effort" memo, Brown's rap sheet, and Kline's well-publicized attempts to gain access to women's medical records from Kansas abortion clinics (including the one operated by Dr. Tiller, he of the "blood money" mentioned in Kline's memo), form a pattern which disturbs Morrison.

"Kline's narrow political agenda controls what that office does and that is not a good thing. And I believe that's why he got into that whole medical records mess. Personal politics should not control the agenda at the AG's office," says Morrison. "To use the power of that office to pursue your own political agenda is inexcusable, and that will never happen under my watch. The attorney general is supposed to be the attorney general for all of the people in this state, not just those that think like he does."

Has Kline taken his post as AG too far, akin to a latter day John Brown or perhaps a reincarnated Rasputin? When asked directly if he thinks that Kline has abused his position as Kansas attorney general, Morrison doesn't hesitate in his blunt assessment.

Jesus supposedly chased the moneychangers out of the temple.

Apparently, Phil Kline is trying to chase them back in, and hit them up for contributions.

It is really astounding, the level to which our democracy has sunk.

Anybody who tries to lead people to believe that God is behind their candidacy should be shunned from politics.