Good: Easy to learn, plenty to do

Seriously: This game is repetitive

The space between releases may be getting farther and farther apart, but that doesn't mean that Nintendo is about to abandon their lucrative Pokemon franchise. Their latest offering, Pokemon Mystery Dungeon: Blue Rescue Team for the DS, is only Nintendo's second Pokemon offering since Gale of Darkness graced the Gamecube last fall.

Blue Rescue Team begins by asking you a series of personality questions and then assigns you a character based on your answers. After that you select another Pokemon to as your partner and then the game begins.

After a lengthy intro you're introduced to Blue Rescue Team's main gameplay mechanic. Instead of controlling a Pokemon Master and battling other masters with your collection of cuddly monsters like in other Pokemon titles, in Blue Rescue Team you guide said cuddly monsters through a variety of randomly generated, Zelda-inspired dungeons. 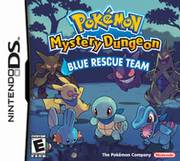 Actually, that's the only gameplay element within Blue Rescue Team. You and your teammate are delivered a list of jobs every morning by a pelican, usually consisting of tasks like finding a lost Pokemon, escorting a Pokemon to a lost Pokemon or retrieving a specific item for a Pokemon. After you've completed your task you're given your reward, allowed to save and then go to bed, all to wake up the next morning and do it again. Think Groundhog Day and you've got a pretty good idea of how Blue Rescue Team starts to feel after a few hours.

While in a dungeon your party can move freely until you encounter an enemy Pokemon. When this occurs the game becomes turn-based, allowing you to move only one square at a time, attack, use items or issue commands to your party member. Experience points are earned by defeating enemies and leveling up improves your stats and, if there's room in your Moves List, learn new abilities.

It's also possible to recruit other Pokemon to your team. While it is tedious at first since most of the recruited Pokemon are weak and require babysitting, towards the end of the game they make things a lot easier.

Multiplayer isn't as pronounced as in previous Pokemon titles. You can't actually play with another person, but if you're ever defeated in a dungeon, you can send a wireless SOS Message or a password to a friend, which can then complete the dungeon and rescue you.

Ultimately, Pokemon Mystery Dungeon: Blue Rescue Team is a good RPG for kids and gamers new to the genre. It's an easy, lightweight introduction with a decent amount of customization that never becomes overwhelming. Of course, without much of a challenge that means that it gets repetitive. Fast.