Drenched in the songwriting style of Pavement, the squall of My Bloody Valentine and ravaged vocals the likes of Tim Kasher, the band has spent its year recording toward the impending release of an EP and hopefully soon after, a debut full-length album.

lawrence.com: Where did your band name come from?

Barrett Emke: It comes from a book. It's a children's book and there are two ghosts. One of the ghosts is named Boo and the other ghost is named Boo Too. They live in this house together and they have this costume party, and they eat a bunch of cake and play hide and seek and Boo Too gets stuck in the chimney.

Oh no-what were they doing?

Barrett: She hides and then because she ate too much cake so she gets stuck in the chimney -then they find her and pull her out.

I didn't know ghosts could get fat.

Boo and Boo Too 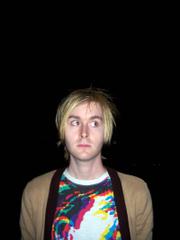 What are some of your favorite bands? It doesn't have to be influences necessarily-but what are you listening to?

Barrett: Luke and [Oscar] Allen really like Ghostface Killah, too.

What outside of music influences your band?

Barrett: I guess each other. Our friends. Shaye and Kiki [who produce videos].

Gaurav: I think art in general influences us in a lot of different ways, whether it's film or music-all mediums. We're all into our own things, like Barrett for example is really into photography and has a lot of things no one has ever seen.

Barrett: Shaye St. John and Kiki and their fun bubble. You can't really explain it-it's like a TV show. It's on the internet [shayesaintjohn.com].

How does being in a town like Lawrence that's pretty active with music, art and film-how does that help or hurt being in a band?

Oscar Allen: I've definitely been playing more music since I've been here just because I live with Luke and Barrett. Whenever we're not at work we're probably down in the basement recording something or doing something and so that's been pretty great. The biggest change in coming to Lawrence from Kansas City is less of an artistic thing and more drinking.

Oscar: That's about when Derek and I decided to jump on the bandwagon. So we had nothing to do with the success [laughs] but hopefully the inevitable gradual decline we can participate in.

You guys got some studio time from winning Farmer's Ball-how did you use it?

Barrett: We actually used it in August because we had a different lineup when we played Farmer's Ball. Our original drummer, Eric, played drums when we recorded in August, and Derek and Allen had just joined, so we used that lineup when we initially recorded.

So is this all towards work on an album?

Yeah. We have enough songs for an album. Right now, we're going to release four of the ones we recorded with Nick Day in August as an EP within the next month or two, hopefully, and then I guess we'll go from there to try and decide whether to record more to see if we have enough for an EP and an album or if it might all become one thing.

You guys are pretty fun live. Is there anything you're looking for people to get out of it or see? How about Luke?

Luke Namee: I have nothing to say [laughs].

Luke: We just want to get really crazy.

Gaurav: I think we just want to have a really good time.

Barrett: I think we just want it really loud and really fun like good practices. What I like about our shows most is that our friends always come. So no matter what, our friends hanging out with us, having a good time, getting drunk, playing really loud and knocking amps over.