Okay, stop me if you've heard this one before: A mysterious stranger arrives in town with no memory of his past or explanation for his many talents. In no time at all he becomes involved in events that change the world. Yes, it's the plot of Footloose and every Clint Eastwood western, but it's also the plot of every generic RPG ever made.

Custom Robo Arena for the Nintendo DS is one such generic RPG. Your character is a player-named, expressionless nobody. The plot and game objectives are dropped like breadcrumbs and the overall quest leaves little room for exploration and even less to discover when you do go exploring.

It's a good thing, then, that Arena has some interesting combat to fall back on. The main form of entertainment in the Custom Robo world is one-on-one combat with action figure-sized robots.

When battling in the arena the game shifts from the 2D top-down perspective of the story to a fully 3D environment. Players are literally launched into the arena and then proceed to assault each other with blasters, missiles, and ground-traveling pods. 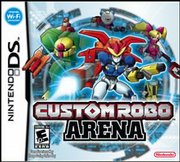 Battles are fast and the controls are responsive, but the main draw of the combat is the high number of customization options for the Transformer look-alikes. It's possible to equip a variety of guns, missile launchers, legs, torsos and pods to do more damage, increase agility, and take less damage.

But the real incentive for all this customization is finding a proper balance between your weapons. If coordinated properly it's possible to do massive amounts of damage against your enemies by using your missiles to down them, your pods to knock them into the air, and then your gun to juggle them. Get this right, and any enemy becomes short work, partially due to superior firepower, partially due to predictable enemy A.I.

For a true test of your Robo's abilities multiplayer is the way to go. It's possible to play a friend with one copy of the game, which is fun, but Nintendo also included true online play. Even though using friend codes is still annoying, playing online is the only way to consider Custom Robo Arena. It focuses on all the game's strengths and ignores its array of shortcomings, but even then, it's a shallow mode that won't hold your attention for too long. Once you get the hang of the rudimentary combo system, it's possible to make short work of living people, too.

Custom Robo Arena is a by-the-numbers RPG with nothing to separate it from the status quo. The story is familiar and dull. The subquests are unexciting scavenger hunts or battles with set parameters. The combat its only redeeming aspect quickly becomes boring due to its repetitive nature. Even playing friends or strangers online gets old fast. While it may be a decent first RPG for children, with its spoon-fed story and easy to follow objectives, ultimately it comes up short.