When it was released on the last generation of consoles, The Godfather escaped the curse of terrible licensed games. While not displaying the huge scale of GTA or Saints Row, it managed to present gamers with a solid mob simulator. This new Wii version may not be as visually polished as its 360 and PS3 brethren, but the new motion controls make it a completely different experience.

The main storyline loosely follows the plot of the film, and features the likenesses and voices of the main actors. You play as a young member of the family that must work his way up by gaining respect. Respect can be earned in numerous ways, and this variety is one of the best aspects of the game. 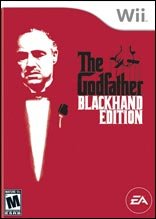 Simply advancing the story will earn you plenty of respect, but it's more entertaining to explore the re-created NYC and find your own ways. My personal favorite was through extortion, as you can go into various bakeries, smoke shops, and bars to offer protection. If the clerk refuses, it's up to you to rattle him enough until they crack. This can be done by roughing them up, breaking items in the shop, throwing merchandise around, or even tossing customers out of windows. Once they crack, you'll receive a weekly paycheck for the Corleone's protection.

It's also possible to crack safes, rob banks, and even compete in prize fights. Random people will sometimes ask favors, which can also net you cash and respect. If a baker wants revenge on an arsonist, you can expect a reward for taking him out.

The motion controls are entertaining most of the time, but sometimes a bit unresponsive. Punching and choking enemies, aiming your gun, smashing heads into cash registers, opening doors and more are controlled with the Wiimote. Some of the motions (like punching) usually work perfectly fine, albeit with the occasional lag. Other motions are far more unreliable, such as the choking gesture.

Many missions in The Godfather feature high-speed car chases, and these can be terribly annoying. The controls for automobiles aren't nearly as polished as other games in the genre, and you'll find yourself dying at the hands of cops and rival gangs often. Crashes tend to slow you down too much, and it's difficult to take turns at high speeds.

Visually, it certainly resembles its PS2 and Xbox counterparts far more than the PS3 or 360. Colors are a bit washed out, and you'll notice "jaggies" all over the place. Textures on roads and other environments are especially bland.

The movie theme is certainly a classic, but that doesn't mean I want to hear it every 10 seconds. It seems like it's constantly playing, and you'll get tired of it quickly. Despite this, the game features a very solid audio presentation. All of the actors put forth great performances, and weapon and explosion effects sound decent.

The Godfather is a solid new entry in the popular open-ended crime genre, but it isn't without its flaws. While this Wii version added a few new aspects, it retained the same clunky controls and problems that the past-gen versions had.