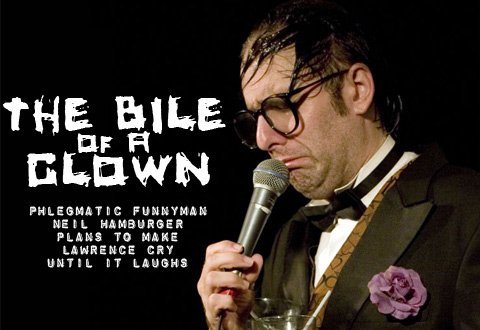 Remember the good old days of comedy? When wrinkled borscht belt hacks in cheap tuxedos belittled minorities and women? Those glorious salad days of rim-shot-ready one-liners, gin-soaked toupees and Schecky Greene? Well, Neil Hamburger remembers-and he's keeping that tradition alive whether you want him to or not. He's a painful virtuoso of bad timing, wildly inappropriate humor and greasy comb-overs. If you head to the Jackpot to see this human train wreck in person, prepare to wince at zingers like "What's the difference between Courtney Love and an American flag? You shouldn't urinate on an American flag." Hamburger (who denies being the meta-comedy alter ego of California-based musician/writer Gregg Turkington) has toured the globe with acts such as Tenacious D, released eight comedy albums and starred in two DVDs, the latest of which is "Neil Hamburger: The World's Funnyman." This anti-hero of uncomfortable stand up joined us from Australia...

The Bile of a Clown

Do you remember these timeless comedy hits from Neil Hamburger, The World's Funnyman? -"Why did the chicken cross the road? To take pictures of Princess Di, dead in her car." -"What's the difference between Courtney Love and a porcupine? Well, if you get pricked by a porcupine's needle, you're not ...

lawrence.com: Neil Hamburger, World's Funnyman, thank you for joining us all the way from Australia.

Neil Hamburger: Let's get this party started. I'm very happy to be here on lawrence.com, although it's a little bit drafty:I'm assuming it's from your internet site. You might want to get that checked for viruses.

We'll get our webmaster on that. Is it true that you're the Jerry Lewis of Australia?

Well, not financially. I wouldn't say that I'm the Jerry Lewis of anyplace in that I am pretty much down to a few coins and stray pizza crusts. However, if you were to measure a man's success by the number of people who have laughed their fool heads off:we did a show in Tazmania on Saturday night and had a couple of guys whose sides split from laughter. They had to get some stitches. They have free medical care here, which is great for me because when the people laugh so hard that they injure themselves, I don't end up being sued.

One of your favorite topics is venereal disease, which is timely considering that the father of Anna Nicole Smith's baby was just revealed:

What are your thoughts on the Anna Nicole Smith saga?

Well, I think it's distracting from some of the real news. You know, there are people suffering all over this world and there are real issues that this is taking attention away from, such as Britney Spears' rehab. There may be a Spice Girls reunion this year-these are international things that mean something. I don't like being distracted by trivial things like the Anna Nicole Smith circus.

Being a show biz veteran, do you have any advice for Britney Spears?

I think she needs to hire a brick layer to brick up her mouth so she can't sing anymore. Then she needs to take some of the money she's earned over the years for some of her horrible singing, buy a rocket ship, and shoot herself to the moon. We're tired of what she's done down here, which is to demoralize not only the teenagers-who are innocent-but also people such as the troops who are over in Iraq who have to listen to her awful music. Maybe she can eke out a living amongst the moon-people, but we've had enough of her here. 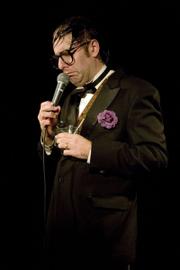 What are your thoughts on another of America's finest exports, Michael Jackson?

I think that a lot of these children are wise to him, so he may not have the success that he's had in the past-sexually speaking. I think what he needs to do, once again, is see if he can get a slot on that rocket ship to the moon that Britney Spears is booking out.

Do you think he would get on a rocket ship with anyone who isn't a small boy?

If he sells the Beatles' catalogue to Pringles-because I think those songs would work in a lot of potato chip ads; Pringles has "Barbeque" and "Sour Cream and Onion" and all of that stuff, so you got a Beatles song for every one of those varieties-he can buy three or four of those kids and get them up on the rocket ship. He's free to do whatever he wants on the moon, where they don't have any laws. And maybe Britney can use the opportunity to learn how to be a good mother to these kids, because she has failed with these two little K-Fed kids:she's so stoned on LSD and date rape drugs and who knows what else that you wouldn't want any of her breast milk, if you know what I'm saying.

You will be bringing this insightful social commentary to Lawrence:

And you know what is amazing? Has there ever been, in the history of this planet, an act who did a show in Sydney, Australia, and then their very next show was in Lawrence, Kansas? I mean, that is a commute.

You've been to Lawrence before:

Yeah, I've done a couple of shows there, but it has been way too long because the people there are such good people and such warm-hearted people. To have neglected them for as many years as I have:that is a shame and I should probably do some time in prison over that one. I mean, Vanilla Ice has been there three times since the last time I was there. The people are suffering. How many times can you see Limp Bizkit in Lawrence? The guy can't even afford a belt-his pants are falling down. What a slob. I've got a tuxedo. This is a whole other class of act.

You haven't developed as fanatical a following here in the U.S. as you have in Canada or Australia-why is that?

Well, I think people have a lot of problems over there. A lot of tears are being shed. People are walking around carrying the weight of the world on their shoulders. Also, they're all stoned on LSD and Campbell's Soup, you know? They don't know what's good for them.

What better place to start conquering America than Lawrence?

Where it all started-that's the birthplace of the atomic bomb, if I'm not mistaken.

Don't miss this opportunity to see one of the most over-the-top hilarious nights in the history of our great state. Make sure to bring your entire family and all of your friends for this no-holds-barred laugh riot!