Why, why, why: Can't you skip cutscenes?

As the highest-profile title from the 360's launch, Call of Duty 2 certainly found its way into countless gamer's homes last November. It was a terrific gameplay experience that was slightly marred by some major lag issues online (initially). This time around, the single-player is a bit on the weak side, but the online play shines.

Like its predecessor, Call of Duty 3 suffered from early online issues that severely hurt the gameplay experience. COD2 featured in-game lag, and COD3 took forever to get into a match. Luckily, the online issues have almost entirely been fixed, and it results in one of the greatest multiplayer experiences on the system.

It's amazing how many authentic battles from World War II are included in the COD series. Rather than going with the standard D-Day battles we've seen a million times before, COD3 throws you in the middle of many lesser-known skirmishes as the Allies march towards Paris.

The narrative isn't particularly interesting, and you'll shift characters and countries quite a bit. Perhaps the most infuriating aspect of the entire title is the fact that you can not under any circumstance skip cutscenes or dialogue segments. It would be understandable if you had to watch them the first time only, but that isn't the case. Even if you've watched every single cutscene in the game, you'll have to watch them every single time you start a mission. 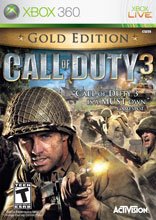 Core gameplay is almost identical to Call of Duty 2, but there are a few additions to keep it varied. From time to time, Nazi soldiers will attack you at close range, initiating a minigames of sorts that requires you to tear the gun from his hands and knock him out. Certain instances of this will be more cinematic, as one features you knocking an enemy off of a water tower and then climbing back up to safety. These instances only pop up a few times throughout the campaign, and don't really add anything substantial to the gameplay experience.

While the single-player campaign stays on par with the action from the previous installment, it pales in comparison to the new and improved Xbox Live play. It now supports up to 24 players and the game modes War, Battle, Team Battle, Single Flag, CTF, and Headquarters. War is certainly my favorite, and features Allies vs. Axis in a struggle to capture and keep multiple areas on the map (indicated by flags). I got a little tired of Headquarters after ten or so rounds, but all of the others are extremely solid.

COD2 was no slouch in the visual department, but this sequel is noticeably superior. Missions involving water look fantastic, with some amazingly detailed rivers and rain effects. Some missions are truly chaotic, with airplanes, tanks, soldiers, and explosions everywhere. Despite all of this onscreen action, I didn't see a single hint of slowdown. The experience is even more immersive when you consider the excellent sound effects and wartime music.

The single-player may only be worth one or two playthroughs, but I can see many gamers getting countless hours battling the Nazis online. This new edition packs in the Valor map pack, as well as fixes the online issues. The initially good COD3 experience is now closer to being great.