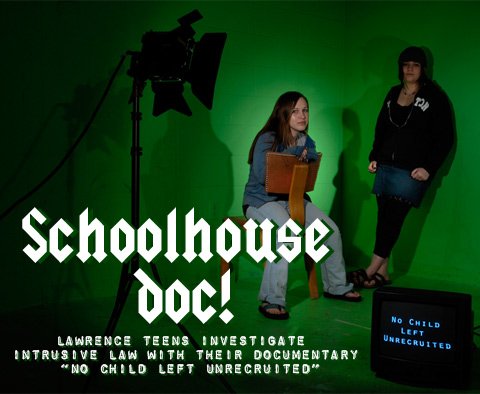 While most kids their age are busy Facebooking, licking toads and getting into knife fights with greasers at the sock-hop (or whatever the hell it is that kids do these days), Lexi Welch and Sarah Ybarra are making their peers look even worse.

These two Lawrence High students aren't wasting their youth all hopped up on goof-balls. They've accomplished something that even Hilary Duff couldn't do-they made an important film.

"It's a documentary about our school in particular and how the Army recruits, and how they get their information," says 17-year-old Ybarra of her film, "No Child Left Unrecruited."

What started as a project about advertising in school soon mushroomed into an investigative piece of Michael Moore proportions (he's fat).

"I had gotten a letter over the summer from a recruiter who offered $100 to enlist with them," recalls 18-year-old Welch. "We thought all of that could be advertisement:so we started asking questions and kind of put two and two together-military recruiters in school, getting letters at home. Our school told us that No Child Left Behind requires this."

It turns out that a little known provision the Bush administration's flagship domestic initiative requires federally funded schools to provide military recruiters-and, in fact, any third party who cares to shell out the $2 per directory-with the personal information of their students.

As if that creepy clause of what is ostensibly an education bill wasn't galling enough for these junior Woodward and Bernsteins - if you attempt to opt-out of the system you are also dropped from yearbook and honor roll listings.

This motivated Welch and Ybarra to attempt and return the favor by uncomfortably probing on camera those who implement the policy and those who helped pass the policy, including Rep. Dennis Moore, the Democratic representative for Lawrence in Congress, who voted for No Child Left Behind.

"A representative from California introduced the Student Privacy Protection Act, which would require kids and parents to opt in instead of opt out, like it is now. We asked if he would support that," says Welch of a brief encounter with Moore. "He said he honestly didn't think that would even be considered."

While they might have been dismissed as gadflies during the making of "No Child Left Unrecruited," they've certainly garnered some attention as the film nears its official debut at the Lawrence Arts Center.

"We got a call from the Department of Defense," Ybarra boasts. "They called our superintendent, Mr. Weseman. They told him things need to be fixed."

While the Pentagon might have tagged them as "enemy combatants," Welch and Ybarra have also earned some prominent supporters, amongst them award-winning documentarian Robert Greenwald, whose films include "Iraq for Sale" and "Outfoxed."

"He supplied us with a lawyer because the military is refusing to sign the release forms," Ybarra says. "He said he'd be happy to help us get our movie out there."

What's the next step in this extracurricular project's unlikely journey?

"We're mainly thinking about Congress and introducing the film to them, maybe having a professional screening when the revision comes up this summer," Welch says.

Ybarra adds intently: "We have contacted a lot of representatives who are going to be voting to change the No Child Left Behind Act, and we plan on talking to them."

"They want to ignore it," Welch says. "It wasn't an issue before, but now it is:we're getting it out there and they have to do something."

The young filmmakers are obviously not afraid of a fight. I ask them if they're ready to face the potential wrath of conservative commentators, with the likes of Bill O' Reilly ready to call them traitors.

Ybarra gleefully responds, "That would be awesome!"

Seriously, good job. I genuinely admire the cajones you've shown in doing this.

I second the above statement. I know much older people who would just sit around and bitch rather than doing something. Keep going, ye of the awesome type.

I am now wondering about the mechanics. How does the information get disseminated to the military or other parties? Is my mental image of school principals packaging direcory information, licking a stamp, and sending into the ether under Federal mandate off base? Who gets the two dollars? Has any school challenged this provision? Is the DOD going to see that 497 gets its funding pulled?

Who screens the recipients? Am I the only one who smells the danger of lurking predators here? Forget predators. How about spammers? How about product fundraisers? Advertising in schools? Selling personal information? Telling a six year old child he can "Make a Difference" by scamming his neighbors, friends, and relatives into buying overpriced gift wrap is official recognition that these types seek a lower coefficient of integrity than the playground crack dealer.

There is an inconvenient truth (sorry, Al) here. School buildings accross the country are a marketeers prize. From Channel One to Sally Foster to Uncle Sam. Government & Industry buying the trust of our children like commodities, and school administrators selling it.

You are saying this cancer is spreading through Federal mandate.

Wow! With a few more people like these young women something could actually get changed in this country! Amazing that they found out this information & questioned it while everyone else just "accepts" as it is. I'm very proud of them!

I wish these chicks had been around when my school required all sophomores to take the Armed Services Vocational Aptitude tests.

congrats to these two! way to go and i can't wait to see film.. hopefully they have been utilizing wealth of resources on this issue at ACLU; we've been trying to get the word out as well.. here is link to a fact sheet on recruiting in schools http://www.aclu.org/standup/factsheet/index.html