Gamers everywhere (especially of the hardcore variety) have fond memories of the Sega Dreamcast. When I think back to that ultimately unsuccessful system, two titles jump to mind immediately: Soul Calibur and Virtua Tennis. I'm still trying to forget Seaman.

The latter of those two fantastic titles is arguably the greatest tennis game ever made. Sure, Mario Tennis offers up some great fun, and Wii Sports tennis is a blast for nearly everyone, but neither can touch the polish of SEGA's take on the sport.

Virtua Tennis 3 for the Xbox 360 features the same rock-solid gameplay expected of this series. Everything from dashing around the court to charging shots feels perfectly natural and entirely responsive. Most gamers will be fine with variations of the standard top spin shot, but the more advanced can experiment with lobs and slices.

There's not a whole lot you can do with a tennis title other than fine-tune the controls. Considering VT3 had this right from the very beginning, it's certainly a hard-to-improve series. It'll feel extremely familiar to series fans, but the career mode is still a lot of fun. 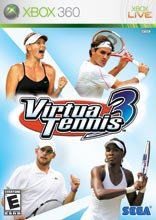 There are numerous training events, and the large majority of them are entertaining. One is a form of Tennis Curling, another requires you to collect fruit while avoiding giant boulderlike tennis balls, and my favorite involves knocking over giant piles of oil drums with your shots. Each of these events will level up a specific quadrant of your skills. It's nice to see a career mode that offers an RPG-style system of leveling up, giving the gamer a better sense of progress than simply going through opponent after opponent.

You get the opportunity to rank up through various tournaments, and your opposition is a bit confusing at times. My created character wound up facing Roger Federer after only two professional matches, for instance. Perhaps my biggest gripe with the career mode is the annoying moments that feature pro players approaching you with absolutely useless advice. It throws off the pacing of the career mode, and is entirely unnecessary.

Visually, this version is noticeably less detailed and impressive than its Playstation 3 counterpart, but not by a gigantic margin. The courts are vivid and realistic, with footprints and scuff marks from hard shots staying visible throughout the match. Player models aren't quite as excellent as the courts, but they're decent representations of their real-life counterparts. All of the sound effects and voice samples sound excellent, but the music is absolutely horrendous. It sounds like SEGA bought the former members of The Scorpions a six-pack to phone in some generic riffs. I promptly turned off the music after two matches, and it made the experience much better.

Multiplayer is great fun, but the online play is certainly imperfect. There isn't much lag, but in a game like this, even a little bit can mean the difference between winning and losing. It's terribly frustrating to go for an easy volley only to miss it because of unfortunately timed lag. If you own both the PS3 and 360, I'd say the improved graphics on the former should be a bigger deciding factor than the flawed online play of the latter.

If you've never played a Virtua Tennis game, you absolutely must check out this game. Veterans of the series will still enjoy it, but don't expect to find anything new here.