Lawrence police arrested 47-year-old Michael Parker last week after tracing bomb threats targeting Douglas County schools and City Hall to a phone in his house. Lawrence schools went into a state of semi-lockdown following the threats on Thursday and nearly 3,000 students were pulled out of class by frightened parents. Parker is said to have been upset at being denied an insurance claim he filed against the city of Lawrence. If convicted on his three counts of aggravated criminal threat, he could face more than 14 years in prison. Parker's bomb threats came three days after the Virginia Tech campus shootings, which put parents and authorities even more on edge.*: Pro-bomb advocates cite the incident as all the more reason to allow bombs in the classroom. "There's no better way to defend classrooms from school bombers than allowing every child to carry a concealed bomb," said a psychotic moron. 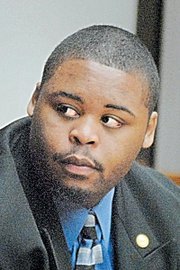 Rashawn T. Anderson, a 20-year-old Topeka man, was convicted last week of second-degree murder and aggravated battery for the February 2006 downtown Lawrence shooting that killed 46-year-old Robert Earl Williams and injured another man. Anderson opened fire in front of the Granada Theater following a hip-hop show, reportedly in retaliation for an altercation between Williams and one of Anderson's friends. Anderson now faces at least 12 years and three months in prison.*:Construction of an acid-filled moat separating Lawrence and Topeka is already under way.

The Supreme Court last week upheld a law that banned a type of late-term abortion, sometimes known as a "partial birth abortion." The 5-4 ruling sends a possible signal of the court's willingness-under Chief Justice John Roberts, who ruled in favor of the ban-to someday revisit the legality of other types of abortion, as allowed by the 1973 Roe v. Wade case. Justice Ruth Bader Ginsburg, in the dissenting opinion, said the majority's opinion "cannot be understood as anything other than an effort to chip away a right declared again and again by this court, and with increasing comprehension of its centrality to women's lives."*:Justice Antonin Scalia, rebutting Ginsburg, said, "That's adorable, sweet cheeks-now go make Alito and me some sandwiches! Make sure you don't get any medical procedures without our permission on the way to the kitchen." Scalia then farted and slapped Ginsburg on the ass.

Testifying before the Senate Judiciary Committee last week regarding the firings of eight U.S. Attorneys, Attorney General Alberto Gonzales did little to help dispel calls for his resignation. When confronted with questions about his conflicting stories regarding the prosecutor purge, Gonzales responded with a variation of "I don't recall" 64 times. Even members of the Attorney General's own party weren't impressed. "It was handled incompetently. The communication was atrocious," said Tom Coburn, Republican Senator from Oklahoma. "You ought to suffer the consequences that these others have suffered, and I believe that the best way to put this behind us is your resignation."*:Gonzales, under his own legal framework suspending habeas corpus and the Geneva Conventions, was tied to his chair and repeatedly punched in the groin by Judiciary Chairman Patrick Leahy until he could "recall." 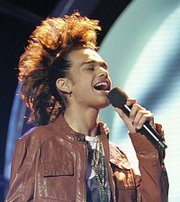 Sanjaya Malakar, the 17-year-old "American Idol" contestant of Indian descent known for once sporting a "pony-hawk" and not being able to sing very well, was finally eliminated from the popular reality TV show last week. Despite having limited vocal talent and being constantly savaged by judge Simon Cowell, Sanjaya advanced a surprising distance in the singing competition. Theories circulated the Malakar advanced only because of the efforts of "American Idol" critics, including shock jock Howard Stern, who encouraged people to take advantage of the show's open voting process and select the worst contestant.*:Experts believe this is the first instance in American history when abuse of an electoral system has been used to benefit a minority. 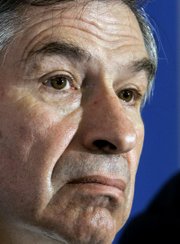 World Bank President Paul Wolfowitz faced increasing pressure to step down from that international lending organization amidst a growing scandal involving a hefty pay raise Wolfowitz secured for his girlfriend, Shaha Riza, who also works at the World Bank. Forty-two former World Bank officials have come forward and urged Wolfowitz to resign, saying that his actions have undercut the bank's credibility in its efforts to fight corruption. Wolfowitz, the former deputy secretary of defense at the Pentagon and central architect of the Iraq war, was appointed to the position by President Bush in January of 2005.*:When reached for comment about his old deputy's scandal involving a younger woman, former Secretary of Defense Donald Rumsfeld responded, "Wolfowitz, you old Dog-owitz!"