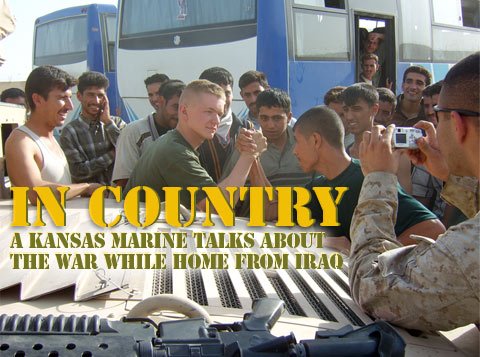 A marine recruiter visited Seaman High School in Topeka before graduation in 1999-before 9/11, before most Americans knew the name Osama bin Laden or had thought much about terrorism. The recruiter met Jeff Hodges, who was ready to sign up-his plan was to get a chemical engineering degree at KU and become a military officer.

Shortly after Hodges enlisted, the U.S.S. Cole was attacked by a suicide bomber-the incident marked the point when al Qaeda began to enter the American consciousness. "That kind of struck home," Hodges says. Over the next few years, while the "War on Terror" was gearing up, Hodges finished his degree at KU. As he was preparing to take a civilian job and buy a home, he got the call-in January 2005, he was deployed to Iraq, and stationed in Ramadi until October. Upon returning, he was offered commission and bonuses to return. He turned them down and hopes his contract with the Marines will expire in nine weeks as scheduled by his original enlistment.

lawrence.com: What went through your mind when you found out you were going to Iraq?

The first thing was, "I'm actually really lucky." I was able to get my degree in chemical engineering prior to shipping out. There were other guys who had been in college and had to put their classes on hold. I was able to graduate, but I had just got a new job, I was looking at houses:basically starting my life as a college grad. I couldn't do any of that. You can't make any commitments for a certain amount of time because you're not going to be there. It's not just getting a job and buying a house, it's social life. Do you really want to start something up when you know you're going to be gone that long? It's difficult.

At the same time, by the time I actually left, I reached a point where I fully expected not to come back. I knew I wasn't going to see anyone in the United States again-but it wasn't worry. The common American view of death is that it's a bad thing. Don't get me wrong, I like life a lot, but there are worse things.

I made sure I got a will. You expect the worst. You hope for the best, but you realize that the best never happens.

What was your first impression of Iraq when you arrived?

One of the first things you notice is the heat, obviously. It's the desert, it tends to get a little hot. Not only that, but you're wearing anywhere from 20 to 50 pounds of body armor:you could be 20 degrees hotter than your surroundings, which is anywhere from 110 to 120 degrees on the hot days.

A certain smell seems to pervade the entire country. In order to experience something like it, you need to go to a garbage dump on the hottest day of the year, cover it in human feces, and set it on fire. That's honestly what it smells like. The only saving grace is that you get used to it. You don't notice it after a while:about a month.

What were your duties?

My job, specifically, was that I am the gunner. I'm the focal point. I'm the human image of that given truck, so if somebody needs to communicate:I'm the one who's doing it. I speak very little Arabic, so it's mostly hand and arm symbols. Not being able to communicate directly makes it a little more difficult. What would help, especially if there are a lot of kids around, is to have some hard candy on you. One of the things they tried to tell us is that we're trying to win the hearts and minds. I don't know how well we did that, but if you're nice to someone, chances are they'll help you out in the future.

Your duty is that you're defending your vehicle and everybody else in your convoy, be they military or if you're escorting civilians. Your objective is that if anybody happens to fire at you or happens to be aggressive towards you, you return fire.

What makes it even more difficult is that in an urban guerilla type of warfare:if one person is shooting at you, you can't necessarily shoot back. If they're in a crowd of children or civilians, how do you determine which person in that crowd shot at you? Even if you can tell, how do you know if you're going to hit anybody else that shouldn't be? It's a different situation than what you would envision in a World War II movie, where there's just hails of gunfire going back and forth. It doesn't work like that.

That's just gunfire, though. Then you get into the issue of roadside bombs, the improvised explosive devices. Most of the time they're buried, you won't see the person, they have a remote control and as soon as you drive by they hit the switch. Or mortars-you can't see where they're coming from, but you can hear them when they're coming in. You can hear them a few seconds before they hit, and they're loud enough you can't tell where they're going to hit.

When this happens, I'm the one guy that's not inside the nice, armored vehicle. There were a few close calls where you would actually feel shrapnel flying through the air at you and just try to duck in time.

The view from Cpl. Hodges' tour in Iraq.

Did you personally encounter anyone who was wounded or lost their life?

Yes I did. I knew quite a few people that were hurt to some degree, but one guy in particular:I had spent several weeks drawing out what tattoo I wanted. It was a great tattoo:it had special meaning to me. The guy that was doing tattoos had all his own equipment shipped over from the United States and he had actually set up shop. When he wasn't on a mission, which is a lot of times random, you arrange with him ahead of time for a very cheap price and he would set you up. He was a very accomplished tattoo artist, and still is, but I ended up never getting that tattoo. While on patrol, his truck ran over an anti-tank mine. As a result he ended up losing his leg completely. The first time I saw him after that was on July 4, 2005. He was looking a little tore up, but he's an incredible, strong person. As a result he got shipped home early and I never had a chance to contact him after that.

Do you agree with the Pentagon decision to forbid photographs of coffins returning from Iraq?

I can see both sides of this argument. On the one hand, it's important that the American people know the human toll-what this is costing, not in dollars, but in lives. It's just one of those things that brings the message home. At the same time, I can understand that-out of respect for the person in that coffin and their loved ones-not to allow that to be photographed. 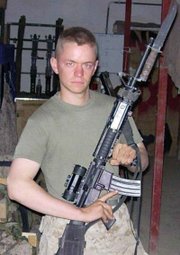 What was the strangest, most surreal thing you saw in Iraq?

"Strange" was daily. You see a cow. No big deal, there are animals all over the place-you see donkeys, and camels, and whatever-but you notice there's something weird about that cow. It has wires coming out of it. It's a living cow, it's mooing:you don't really think much of it. Whatever; the cow ate something and it's coming out. Well, the humor drops from the situation when you realize that somebody has placed a 120mm mortar inside of that live cow, making it a walking, breathing bomb. They shoved it up the cow's ass. Explosive ordinance disposal was called in. I do not know for certain, but I'm under the impression that the cow lived. The explosive was removed without incident and the cow was able to go on his merry little way.

How has Iraq changed your life?

I am a lot more chill than I used to be. Things don't get to me. "Upset" doesn't mean the same thing:you understand that things could be worse. I could be stuck in Iraq.

Thanks to Cpl Hodges for sharing - i mean it sincerely. 2 things suggest you read: Howard Zinn's, PEOPLE'S HISTORY OF THE US and anything about and by Smedley Butler. Also really appreciate your going enlisted as opposed to commissioned! - i bet you're a hell of good guy - and that's more than enough! semper fi joe@yossarianslament.com