While the first two Paper Mario titles were traditional RPGs, this new Wii title smartly incorporates true platforming gameplay into the mix. No longer are battles waged in the turn-based style of Final Fantasy. You'll be defeating enemies in the oldest Mario fashion possible: pressing a button to jump on them.

This may sound overly-simplistic, but fans of the series need not worry. The RPG elements are still intact, just to a reduced degree. You'll still collect items, talk to NPC's, and level up, just without the turn-based interface. This is perhaps the best change seen yet in the series, as it makes it feel like a true Mario title. Sure, it's nice to level up your stats, but it's still some great nostalgia to simply jump on a Goomba just like you did in the mid-80s.

A gameplay twist with almost as much significance is the new "flip" ability. Only Mario can perform this, and it allows him to shift the perspective from standard 2D platformer to a pseudo-3D plane. It's extremely unique, and can actually be pretty disorienting at first. It doesn't take long to realize its usefulness, however. Can't find your way through an area? Flip the perspective and discover a previously unseen path. Low on health and don't feel like traversing over those dangerous piranha plants? Flip the perspective and simply walk around them.

This is performed with a simple press of the A button, and you'll use it in countless situations. Almost anytime you're stuck, flipping to 3D will make the solution much more obvious. That's not the only way to figure out your next move, as your "Pixl" Tippi is there to help. Like Navi in Ocarina of Time, she'll give you advice on your next move as well as your surroundings and enemies. All you have to do is point at something and press A, and she'll do her best to help you out. Waving the cursor around the screen will also uncover some secrets from time to time. 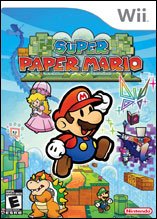 There are many other Pixls besides Tippi, and they're all useful in certain situations. Tippi is the only one that constantly follows you, and you can select one other from the quick menu. Others will allow you to bomb walls and enemies, butt stomp, hammer, become small, run faster, throw items, and make Mario turn sideways and paper-thin.

It's necessary to switch Pixls often, but it's also necessary to switch between your active character. As you progress, you'll gain the ability to control Peach, Bowser, and Luigi. Peach can glide over gaps and defend from attacks with her umbrella, Bowser can annihilate enemies with his fire breath, and Luigi can jump higher than any of them.

Most of the stages do a great job of keeping the gameplay varied. You don't just walk around and flip constantly, there's plenty more to do. Some areas play like old-school shooters, others are nods to turn-based RPGs or dating sims. While there's always new stuff to do, the last few worlds don't feel quite as inspired as the first ten hours or so.

Super Paper Mario is essentially identical to its predecessors in the visual department. Everything is bright and vivid, and the entire experience is a visual package not seen outside this series. It's a great example of a game that has entertaining gameplay without needing the far more powerful hardware of the 360 or PS3. If you've played a first-party Nintendo game in the last decade, you pretty much know what to expect in the audio department. Most tracks fit the environment well, but prepare yourself to hear the same kind of tunes and sound effects you hear every time you pop in a first-party game.

Because how many variables the game includes, you really have to think several different ways when approaching a puzzle. There are many times where the solution isn't as easy as "just flip to 3D." You might need to be a specific character, use a specific pixel, or do something in one plane that transfers over to the other. It's certainly a very smart game, and this gameplay makes Super Paper Mario hard to lump into a specific genre. It's too smart to be a straight platformer, and too much of a platformer to be a traditional RPG. Whatever it is, it's a wonderfully creative game that should appeal to both the casual and hardcore crowds.