Whenever the viability of video games as an art form is called into question Role Playing Games are one of the best positive examples to give. Unlike many other genres, RPGs have just as much to gain from a good story and a thoughtful presentation as they do from solid gameplay. When done right, a good RPG feels like a good novel. Characters change and relationships develop and by the time the game reaches its conclusion the player has a genuine attachment to the characters (just ask any cosplayer).

Problem is, there aren't that many good RPGs. Most of them get half the job done. Some have great presentation, but paper-thin gameplay. Others have great gameplay, but the production qualities of a junior high musical. Ar Tonelico: Melody of Elemia belongs in the last category.

The game features three systems that make the experience tolerable, the most outstanding of which is the combat.

Here the goal is balancing physical attacks with song magic. A Reyvateil, Ar Tonelico's version of a mage, begins each round by channeling music. The longer one is allowed to channel a specific song, the more powerful it becomes. While they focus, physical attackers punish the opposition and protect the Reyvateil. 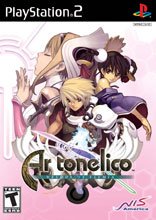 During all of this a gauge that represents both magic and physical attacks steadily builds. Each time it reaches a new level players are rewarded with various bonuses that boost attributes and provide rare items. It all works incredibly well.

Also at work is a decent item customization system and the Dive system, which allows players to craft new spells by going into the minds of your Reyvateil. Both systems work well, but are incredibly straightforward, allowing little room for experimentation or discovery.

The world of Ar tonelico is highly immersive. The game drops you into a futuristic universe complete with its own religious practices, class system, language and mythology. As you progress through the game certain aspects of the culture are explained, but by the end there's still plenty of mystery left.

In a strictly narrative sense this format is highly effective. The world feels disorienting or confusing at first, just like it does for Lyner, the game's main character, but by the conclusion you feel right at home.

Unfortunately, as effective as the narrative is at involving the player it also hinders exploration, a key factor of any good RPG. Because the story moves in a linear fashion with plot points issued out in Morse Code-like succession it is almost impossible to stray from the beaten path and when you do the rewards are marginal at best. Another major hindrance is the lack of a true world map.

Ar Tonelico's visual style is, at best, interesting. At worst, the old school, entirely sprite-based presentation is dated and boring. Aside from a few impressive particle effects there's nothing going on visually that couldn't be duplicated on the PSP or even the Sega Saturn with the RAM expansion. Characters and environments have sparse details and the close-up images of characters that appear during important sequences of dialog lack animation and are inexpressive.

It's also ironic that a game so heavily focused on sound and the power of music has some of the worst voice acting and in-game music of recent memory. Cheesy one-liners abound and the voices of many characters (especially Micha's) are downright grating. During serious scenes of dialog many of the voice actors give forced deliveries that are at times laughable.

In the end Ar tonelico: Melody of Elemia is a excellent example of an RPG that gets it half-right. The combat, item customization and Dive systems are all well done and allow for a great amount of experimentation without ever getting stale. The story is passable, but leaves little room for exploration and the visual and aural presentation range from mediocre to awful. In the end, whether you should or shouldn't play Ar tonelico is completely dependent on which matters more to you: presentation or mechanics.