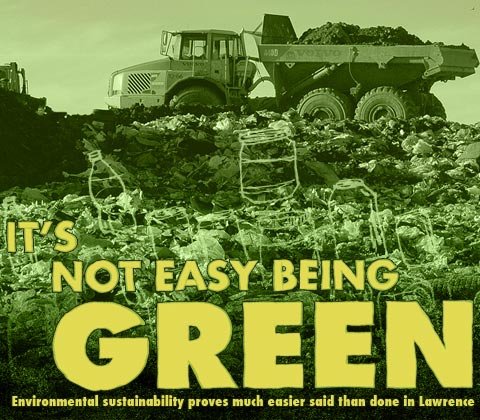 Today, in this post-"Inconvenient Truth" world (or whatever you want to call it), it's so trendy to go green-or at least to act green.

A survey of national news last week, on the heels of Earth Day, suggests the trend is growing like a fungus. Among the headlines:

Whatever the political prestige of putting a green foot forward, one thing becomes clear when talking to local authorities: Environmental sustainability is about long-term goals and baby steps.

Sustainability is a game of benchmarks, pledges and certifications, of lack of funds and a need to reprioritize. And it is a process that brings change but slowly. At least that's how it's been so far.

With hopes of sparking some concrete action on key environmental issues in town, several sponsors (among them the Wakarusa Music & Camping Festival, Zephyr Energy, Liberty Hall, and The World Company, which owns lawrence.com) are organizing a Sustainability Town Hall meeting later this month at Liberty Hall.


A town hall style discussion center around four main topics (roughly 30 minutes each)1. Energy Production and Consumption2. Waste Reduction and Pollution Prevention3. Community Transportation4. Land Use and PlanningParticipating panelists and more info here.Questions from advance emails will be addressed by the panels, as well as questions from the audience (time permitting). Submit your question now to greenteam@lawrence.com

Just how green is Lawrence?

The city claims a recycling rate of 34 percent (in 2006), slightly above the national average of 32 percent.

At the same time, Lawrence doesn't have city-sponsored curbside recycling or a "pay as you throw" trash program-in which people pay for the amount of trash they set on the curb-as many cities around the country have instituted.

On the energy consumption front, the city relies on non-renewable fuels such as coal for 97 percent of its municipal energy. But the 3 percent of "green power" the city gets from renewable sources was enough for the city to announce on Earth Day that it had joined the Environmental Protection Agency's Green Power Partnership.

And a year ago City Commissioner Boog Highberger led the charge to join the Sierra Club's "Cool Cities" initiative, pledging to reduce greenhouse gas emissions to 7 percent below 1990 levels by 2012-agreeing to a provision of the Kyoto Protocol the federal government has refused to follow.

The Hamm Co. landfill North of Lawrence, where the city dumps its trash.

But newly elected City Commissioner Mike Dever, who owns an environmental consulting firm, says it's time for the city to do more. City-sponsored curbside recycling and "pay as you throw" programs could be a good place to start, he says-even if they could cost the city and citizens more money.

The city would need to build a collection facility and buy trucks, equipment and staff. The report estimates this would cost users $11.24 per month, at least in the short term. 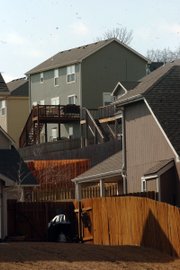 But Sustainability Advisory Board member Laura Routh says Yoos' report is out of date. The small effect the report says curbside recycling would have on total recycling figures, for instance, is from a 1995 study.

Dever says the city ought not be quick to dismiss city-sponsored curbside recycling, and should seriously look into implementing a "pay as you throw" program as an incentive for people to recycle.

"When things get expensive, people start modifying their behavior," he says. ": If I put 15 containers out at my curb, it costs me the same price as if I put one. Does that sound reasonable to you?"

But a pay as you go program, Yoos says, wouldn't be a good fit for Lawrence because of the high number of people who live in apartments or multi-family dwellings and don't participate in curbside pickup.

"I think to do such a program would be unfair to a large segment of the population," he says, "because only 50 percent of the town would be charged the volume fees."

Q & A about Lawrence going green

Many communities that have pay as you throw fees, he says, have the incentive of limiting their trash load because of either high landfill costs or a crowded landfill. But the Hamm Co. landfill Lawrence uses (10 miles north of town) is cheap and has plenty room for now.

"Places such as Lawrence, frankly, just don't have those financial incentives," he says.

On an individual level, many methods of energy conservation are easy. Replace incandescent bulbs with compact fluorescents. Turn off lights and appliances-including units like TVs and VCRs that consume energy-when you're not using them.

Others require more substantial investments or changes in behavior. Use a thermostat with an 'away' timer, and set it at moderate levels (such as 68 degrees or less for your heater and to 75 degrees or higher for your A/C). Replace outdated insulation and install energy efficient windows and appliances.

But when considering energy production, energy conservation becomes more problematic. People interested in buying energy, even if it costs more, from "green" sources-renewable energy like hydroelectric, wind and solar power-face a complex bureaucracy.

Kevin Doyle, infrastructure and development coordinator for the city, explains that it's not like you can go to the energy store and ask for green energy, like you can with organic food.

In Lawrence, you buy energy from Westar, using the primarily coal-produced power the company puts on the grid. But you can offset the coal energy you use by purchasing "green tags."

Jordon Ferrand-Sapsis waters some vegetables in the Kansas Mutual Aid Community Garden on the 800 block of Vermont. The Garden was started last year and provides fresh grown vegetables to the community.

There are many environmental issues that members of the community and Sustainability Advisory Board are pushing for-the arguments for and against each could go on for pages.

How green is Lawrence? Perhaps green is in the eye of the beholder. Perhaps Lawrence is only paying lip service to a trendy intiative. For his part, Highberger is optimistic.

"I'm really feeling a change that I haven't seen in many, many years," he says. "I think we do have some momentum and I hope we can ride it and get come things accomplished here."

Well, amidst the reality is progress, however small. I never cease to be amazed at those who will always want to discuss cost and not benefit, as if there is a cost/benefit ratio that must be met in order for us to make a better future. It is comforting to know that increased cost now is just not good enough for a "greener" tomorrow. Those same people never seem to mention the "if we continue to do nothing" model.

This all makes me want to run out to a gated community and swim in their high-nitrate "lakes" upon which residents gaze from beyond their monoculture lawns and golf-courses. Come on guys! Let's get moving! The more we fertilize, the more we water, the more we mow and the more we can bitch about yard work. It's fun!

Anyway, the ones who use the most, pollute the most and pay such low fees for their riches are the ones who need to foot the bill for change. I agree, it is awful that one guy can put out 15 bags of trash and another only 1 and both pay the same ( I put out only one about every two weeks). It is just as unfair that the gas guzzlers do not pay more for their pollution. The funds could help the less fortunate actually afford to greenup their houses, or maybe even live in houses.

And remember...."what about the children?" And I mean that!

Ah, Lawrence. Our sweet oasis, teaming with life, changing and blooming more every minute. Together singing, working, envisioning the future. I walk through your streets and enhale the sweet perfumes of Spring, and I swear the trees have never been greener than they were today. I, for one, am looking forward to the sustainability meeting on the 21st at Liberty Hall. When there is a will, there is a way...what a great opportunity to voice concerns and share ideas for an even greener Lawrence. Won't you join us?