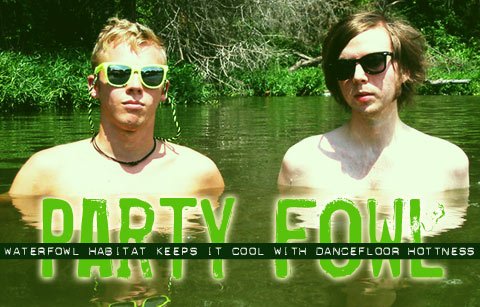 You get what you give at Waterfowl Habitat show. Dance like a banshee and Dylan Hoffman and Tanner Allen will join you; stare blankly at the floor and they will too. But with dirty-bass beats straight outta the Daft Punk camp and gnarly guitar riffs to make Prince proud, dancing is habitual at the clubs Waterfowl inhabits. Any Lawrencian who digs on NEON or like-minded DJ events would do well to check out the duo's off-the-chain live show. For now, peep selections from the Waterfowl vault and groove to our tell-all podcast expose.

You get what you give at Waterfowl Habitat show. Dance like a banshee and Dylan Hoffman and Tanner Allen will join you; stare blankly at the floor and they will too. But with dirty-bass beats straight outta the Daft Punk camp and gnarly guitar riffs to make Prince proud, dancing ...

No-fi highlights from the podcas

lawrence.com: Is there an album coming out soon?

Dylan: We're in the works of doing a split cassette with the band Coat Party. We're each doing a side of like four songs. That should be out probably in the next month. We're playing with them (Sept. 10 at the Jackpot Saloon) and that'll probably be the record release show. I think they're just waiting on us to get our stuff together. We put out a CD last summer that was kind of an eight-song EP. It's home-produced.

Does it have a title?

And why was it titled "Bananamal"?

Dylan: Bananas and animals seem to be the theme of most of our songs, along with food : With no vocals, you gotta get the message across somehow.

How does the live show work?

Tanner: We use electronic drums and synths. Our live shows basically consist of Dylan and I using guitars, bass, effects on those instruments and synthesizers. A lot of it is also backed up.

Dylan: We played with a drummer but we decided we don't like drummers.

Tanner: Too slow, and it restricts what we do.

Dylan: Electronic drums started working better with the stuff we were doing, so we just went with that. A drum machine can't mess up.

Where'd you get the name Waterfowl Habitat?

Dylan: It was a poster at my parents' house back when I used to live with my parents. They have this framed poster of a commemorative stamp from like 1987 that says "Waterfowl Habitat" and has a picture of a duck. We just thought it was funny.

Tanner: It was while we were recording our first song "Vegetable Mountain". We were struggling for a name and we just looked up and it was a sign.

Titling songs must be fun when there are no lyrics.

Tanner: Oh yeah, it's probably the best part of being in this band besides the music.

So it's strictly no vocals?

Dylan: We might do some stuff with some friends that have been wanting to collaborate with hip-hop vocals : We'll probably stay vocal-free for the most part.

What sort of equipment do you use?

Dylan: Beats are all laptop. I use Ableton, and I have a Micro Korg so most of the synth lines come from that. Everything else is pretty much bass and guitar.

What sort of performances do you try to pull off?

Tanner: I think we enjoy having a lot of visuals.

Dylan: There's no frontman, so you don't have somebody out there in the front to look at : We try to play amongst the crowd and off the stage to get a more intimate feel.

How has the response been?

Dylan: It depends on the show and the venue. We'll have good shows with a lot of people and everyone's dancing and there's good feedback, and then we'll have shows that are like a funeral and people are just staring at us confused. We've had a pretty good response in Lawrence and Kansas City.

How do you feel about the Lawrence music scene?

Dylan: I've lived here about two years. I really like the Lawrence nightlife. It has a really good music scene compared to pretty much anywhere else in Kansas.

Tanner: Especially where we came from, there wasn't much of a music scene or nightlife at all.

Dylan: We came from a really small town with nothing to do.

Tanner: Spring Hill, KS. It's like a suburb of Olathe.

Tanner: The first band I ever heard from Lawrence was Ad Astra Per Aspera. We're big fans of them.

Dylan: I wish there was more of a dance scene. There's a lot of DJs. It seems like there's way too much indie rock in this town, but I guess it is a college town, so that's what you get. I like The Armory, Snugglebugs, Mountain Tops.

You guys ought to have a showcase at NEON or something. Have you ever explored that avenue?

Dylan: Yeah, we go to NEON from time-to-time when we're feeling saucy. NEON could use some live music, definitely.

The habitat in my pants gets musty at the thought of this band -- it's a habitat fit for...waterfowl.