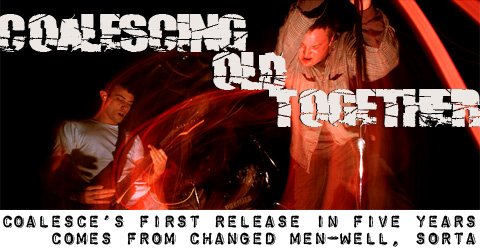 Jes Steineger (left) and Sean Ingram of Coalesce, circa 1994.

Yet it was this be-glassed dude who-circa '94 until a few years ago-fronted Coalesce, the nationally renowned band, with its well-known history of conflict and inspired musicality that made a significant mark on hardcore music.

Each of the band's members have gone through significant life changes since their heaviest days touring and recording-they're all dads now, some business owners, one working on a PhD in philosophy, another working on his faith. However, with the band reunited and finally coasting on a sea of calm with each other, the music remains driving and nothing if not aggressive.

As Coalesce prepares for its longest tour since 2002 and the release of a new 7-inch and DVD, Ingram invited lawrence.com to his office at Blue Collar Press & Distro to talk about hardcore, family, faith, and music.

Sean Ingram is such a mellow, easygoing guy that it can be difficult to reconcile his everyday demeanor with his onstage personality-the raucous source of those brutal, guttural, otherworld emanations. Yet it was this be-glassed dude who-circa '94 until a few years ago-fronted the nationally renowned band, with its well-known ...

lawrence.com: When Coalesce-ahem-coalesced, you guys had some pretty different world views with you coming back from Syracuse and Jes Steineger (guitar) and Stacy Hilt (bass) doing the Krishna thing. How did you come together so easily musically?

It was hard with Jim Redd to make those worlds match because he wasn't a hardcore kid. It's funny because he was into the things we're into now. He was a Tool kid, and I never experienced them. I'm a huge Tool fan now, but that's what he was going for-that kind of esoteric music, the builds and all that stuff. I didn't understand that, I was like 'play it faster, let me scream.' So he went along with us and did a great job. But that was definitely the weak link in the band, not the Krishna vs. the straight edge vs. the not straight edge, but the different backgrounds and what music means to you. You're in hardcore and you expect not to make any money or get recognition. You just expect to show up and play your heart out and then go.

Coalesce / This Is My Condition / Rocket Fuel is the Key

Hardcore is still a really insular scene. For all the bravura about politics, racism and animal rights, why do you think those kids tend to be so much more militant about their music staying in this one genre?

You know, I've flip-flopped on this. At points I've been like 'who cares if the masses accept this music? Popularity dictates what lives and dies, right? If I can make a living doing this, what's so wrong with that?'

You know what? Screw that. Hardcore I believe shouldn't be able to fit in your pocket. It should be an experience that isn't on TV shows, on the O.C.. It should be an experience that isn't ripped off and homogenized and put on T-shirts at Wal-Mart.That may sound selfish and it may be selfish, but when you're in a hardcore band you see that you're connecting with these kids on a certain level and there are no signs that say 'no stage diving because we might get sued' or 'I can't do this show because I can't insure you.' When you're in a basement or a VFW hall it's an amazing experience. When somebody markets that, it cheapens the whole thing. So I know why those kids feel that way, because it is theirs. 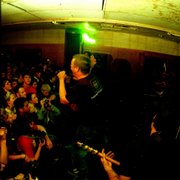 How do you think it might have been different if you guys had started in the age of the internet and MySpace?

I think it would have been garbage. We wouldn't have had to work for it-it would have been too easy, I think. I hear arguments go both ways: What's your idea of making it in the music business? It's hard to get on a major label and be a heartthrob? Or is it hard to write songs and go on the road? Keep in mind that when we booked a tour it was a mandatory $500 long-distance phone bill.

Your life has changed a lot. Three babies? Then working in your own business and having a seemingly increased interest in your faith.

I have references to God all over dating back to Give Them Rope and before. I've never not believed in God, but I've always been suspicious of Christians. This is something my mother would tell me all the time and it's always stuck with me: 'If he has to tell you he's a Christian, grab your ass because he's going to screw you':

When you're new and you're still trying to figure what it's all about, there are people in line to tell you that it's about politics, abortion, gay marriage-who would have thought about that back in the '90s? In Topeka and Lawrence people are telling you it's about hate: I don't want to fall into those trappings. I didn't want anything to do with those guys, anybody that was condemning to me or judgmental to me.

That's how it is with any punk rocker, if you're judgmental, especially in a religious sense, it's over for you. At the same time though, how many people are being judged for straight edge and veganism? When I started searching and asking, it came down to cracking open a Bible and studying what it actually meant.

Why do you think that some people are really reluctant to talk about their faith whether or not it plays a big part in their music?

I remember Rob Pope had told me about a band that had "gone Christian" in order to get into the scene. I'd always known people to hate Christians, at least not openly embrace them.

I think people are reluctant for a lot of reasons, fear would be the main one. Fear of alienating their fans, fear of being categorized as a Christian band and they're not taken as seriously. But that's the Christian bands' faults-you go to a Christian bookstores, you've got your Christian Nine Inch Nails, you've got your Christian Nirvana. I can see bands not wanting to be trapped by that because it's silly. That's just the Catholic or Christian marketing money machine ruining everything: I'm sure some people will have problems with it, but people have problems with me in general.

How about your kids? Are they Coalesce fans?

Um, no. I've tried really hard to get my kids into independent music. I should have played them Billy Ray Cyrus, really crappy country so they would rebel against it. I'm trying to get them into Bad Brains, Dead Kennedys but they say 'dad, turn it off,' and they reach for the Kelly Clarkson. What are you gonna do? They still play with Littlest Pet Shop. They're kids.

The new record is a two-song vinyl?

Yeah, a two-song vinyl only. We weren't sure what to do, but Jes brought up the idea 'Let's do it like we did in '94 and put out our own 7", and basically look at it as rebirth of the band.' So that's what we decided to do and Dan Askew from Second Nature is helping us. Not really to make a statement or anything, but because it's what we know and it was fun and it was awesome back then so why not do it now? Some people have poker games, some guys go fishing. We record records.