Alberto R. Gonzales-the embattled Attorney General whose tenure has been riddled with controversy and accusations of perjury-resigned Monday morning. The resignation came as something of a surprise, after Gonzales had refused calls for his resignation for months. To the end, President Bush had continued his support for his long-time friend Gonzales, whose leadership of the Justice Department has been questioned by many in Washington. His role in the dismissal of nine U.S. attorneys has been under scrutiny by a congressional inquiry, which some say Gonzales has deliberately misled.*...Gonzales, in his retirement announcement, wanted to thank people he "could not recall" and saie he wanted to spend more time with his family which, to the best of his recollection, "may or may not exist." Gonzales then strapped on his ball gag and leather gimp suit, retreated to his steamer trunk, and was shipped to a CIA black site where he could now personally enjoy the relaxation of the Geneva Conventions which he helped orchestrate. The White House plans to replace Gonzales with a similarly qualified polyp removed from Bush's prostate..

THE BEARS AND THE BULLSH*T

Stock market volatility continues to rock Wall Street, still on shaky ground by a collapse in the subprime lending industry earlier this year. Subprime lending is the controversial practice of granting loans to individuals with poor credit, often described by critics as "predatory lending," where creditors offer misleading rates to prospective home buyers who frequently can't pay off the loans. The wave of foreclosures on homes purchased with subprime loans has reached an epidemic point that has rattled international markets, causing the Dow Jones to fluctuate wildly in recent weeks. The Federal Reserve Board has taken steps to shore up the market, pouring billions into the financial system and slashing interest rates three times in the span of a few weeks. Critics of the Fed's actions have said that the market's current volatility is not likely to affect average Americans, and that failed investments should not be rewarded with such bailouts. Meanwhile, Congress has taken up legislation to crack down on subprime lending in order to ease market concerns.*:Downplaying the role of unethical predatory lending, the Rupert Murdoch-owned Wall Street Journal has instead attributed any market volatility to the fact that Nancy Pelosi eats kittens.

FOAM ON THE RANGE

Powerful storms pummeled the Midwest last week, leaving large swaths from Ohio to Minnesota without power and underwater. At least 18 deaths are blamed on the intense weather, which included tornados and torrential rains. President Bush and the Federal Emergency Management Agency have declared many parts of Ohio, Minnesota, Wisconsin, and Michigan disaster areas.*:Governors for each state, mindful of FEMA's response in Louisiana after Hurricane Katrina, have been very careful to declare their counties "Non-Black Disaster Areas." 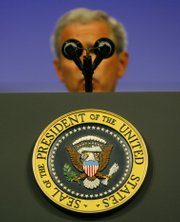 HOW I LEARNED TO STOP WORRYING AND LOVE THE 'NAM

President Bush, in a speech delivered to the Veterans of Foreign Wars convention in Kansas City last week, drew comparisons between the Iraq and Vietnam wars by referencing Graham Greene's 1955 anti-war novel "The Quiet American." Greene's novel revolved around an American agent named Alden Pyle whose meddling in Vietnam resulted in disastrous consequences. Many observers found it strange that Bush chose to cite the novel as a reason not to pull troops from Iraq. "After America entered the Vietnam War, Graham Greene-the Graham Greene argument gathered some steam," said Bush. "Matter of fact, many argued that if we pulled out, there would be no consequences for the Vietnamese people."*: "If Tom Green's characterization of the noble Gomer Pyle has taught us anything," added Bush, "it's that Vietnam was an awesome war that we would have surely won were it not for the defeatist bongos of beatnik scourge Maynard G. Krebs." In a further misinterpretation of a literary classic, Bush then used Ray Bradbury's "Fahrenheit 451" to argue that the U.S. should light the Iraqi people on fire.

Virginia Senator John Warner, senior Republican member of the Armed Services Committee, last week publicly called upon the Bush administration to begin troop withdrawals from Iraq before the end of the year. The 80-year-old Warner, a veteran and former Navy secretary, is the highest profile Republican to break with his party when it comes to President Bush's Iraq policy. Warner's comments come at the same time as a National Intelligence Estimate, has concluded that, despite the latest military surge, political reconciliation amongst the fragile governing coalition in Iraq has come to a halt.*:By speaking his conscience and breaking with party orthodoxy in order to save American lives regardless of political consequences, Warner's comments caused Karl Rove to shriek loudly and spray blood from his eyeballs.

Hope of finding six workers trapped by a coal mine collapse in Utah faded last week after a sixth hole bored into the mountain found no traces of life. A seventh probe is underway, this time into the lunch area, which miners are trained to seek out in emergencies. It's unclear if the search will continue thereafter-whether for potential living miners or for their bodies-as three workers were killed during a rescue attempt. The tragedy at Crandall Canyon has raised questions about mine safety in the U.S., especially in light of the numerous violations incurred by mine owners Murray Energy prior to the collapse. Head of the Mine Safety and Health Administration, Richard Stickler (himself a former coal industry executive recess appointed to his position after the Senate twice refused him due to his poor safety record) will be called to testify before congressional hearings regarding his approval of a risky coal mining technique believed to have caused the Crandall cave in.*:In bizarro alternate reality news, 12 people died in a horrific wind farm accident and President Willie Nelson ordered U.S. troops to secure Iraq's bio-diesel fields by force.

KANSAS, AS BRIG AS YOU THINK

A proposal to shut down the U.S.-run detainment camp in Guantanamo Bay Cuba and shift some of the suspected terrorists held there to Ft. Leavenworth, Kansas, is gaining momentum among lawmakers. A bill introduced this spring by Sen. Tom Harkin of Iowa and now being supported by presidential candidate Sen. John McCain would close the detention camp and shift the detainees to various federal prisons. The Guantanamo camp has long been a contentious issue for human rights watchdogs, as the detainees are indefinitely held in a legal limbo and have no safeguards against inhumane treatement while imprisoned.*:When the hardened terror suspects were informed that they may wind up being transferred to Kansas, the ones who didn't hang themselves begged instead for a transfer to Abu Ghraib.