Bad: Some may feel the respawn system makes the game too easy

Within five minutes of starting Bioshock, you'll encounter more atmosphere and production value than you'll see in most full games. Your character plunges into the ocean following a plane crash, and swims to a dark lighthouse for shelter. As you step in, the door shuts behind you and the room becomes pitch black. When the lights go back on, you're greeted with a giant, scowling golden bust with a banner draped across it that reads "No Gods or Kings. Only Man."

This is your introduction to Rapture, one of the most intriguing locales I've ever seen in the gaming medium. It's an attempt at a utopian society, an underwater city where artists and great thinkers would be free to do their work without fear of political or religious interference. Unfortunately, by 1960, it's become a hellish wasteland filled with genetic "splicers", former citizens that became so obsessed with re-writing their own genetic code that they've become grotesquely disfigured.

Bioshock is a haunting experience from beginning to end. This isn't an alien planet or World War II battleground like most first-person shooter fans are accustomed to. Rapture is the horrible outcome of an extremely ambitious idea, and the fact that it's set back in 1960 only adds to this. Jukeboxes play music from the first half of the century, and art deco seems to be the style of choice for most of the areas. It's so strikingly different than the bland corridors and sterile environments of games like Halo, and it's far better because of it. 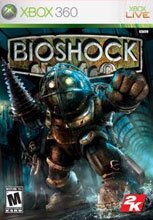 It's not all atmosphere and story, however:Bioshock has some fantastic gameplay filled with some excellent levels of character customization. The unnamed protagonist discovers early on that he can modify his body's abilities by injecting himself with Rapture's plasmids. You'll start with the ability to shoot lightning from your fingertips, but by the end you'll be shooting fire and ice, creating tornado traps, hypnotizing enemies, and even shooting swarms of hornets from your hands. These abilities can be upgraded throughout the course of the game, and they're absolutely crucial to success. There are clever ways of dispatching enemies with them. For example, you can use Incinerate to set them on fire, which will cause them to jump into a pool of water to put themselves out. At this point, you can electrocute the water to finish them off.

On top of the plasmids, you'll also have access to a decent arsenal of standard weaponry. You can wield a wrench, pistol, shotgun, machine gun, chemical thrower, crossbow, and grenade launcher. All of these can be upgraded at the occasional weaponry station. Using them in conjunction with the plasmids can be useful, such as freezing a splicer and shattering him with a few machine gun shots. On top of the standard ammunition, you'll also pick up special shots such as electric and exploding shotgun shells, armor-piercing bullets, and flaming crossbow bolts.

You can even hack various electronics in the environment so they'll work in your favor. If you set off a security alarm, you can freeze one of the flying sentry bots and hack them so they'll attack your enemies. Cameras can be hacked to send security bots to attack any enemies in sight.

The large majority of the enemies you'll face are the splicers, and they come in five varieties (thug, leadhead, Houdini, nitro, and spider). Most of these splicers can be taken out fairly easily if you use the right techniques, but there is a far more intimidating presence lurking in Rapture. Within a level, you'll probably run into two or three "Big Daddies", which are monstrous beings that wear what appears to be a giant scuba diving suit. One variety is armed with a drill, and the other uses explosives and other weaponry. These characters have a fascinating relationship with what are known as "Little Sisters". Ghoulish girls that appear to be around the age of four or five follow the Big Daddies around and harvest ADAM (the substance used in Rapture for genetic modification). from their victim's dead bodies. There were many occasions that I'd just sit back and watch the behavior of these two characters. At one point I saw a Big Daddy knocking on a wall, hoping for a Little Sister to come out. When she didn't appear, he looked disappointed and slowly walked away. On another occasion, I started shooting at a Big Daddy and noticed his first action was to push the Little Sister behind him for protection. Many of these subtle events will happen throughout the experience, and it adds another level of depth to an already fantastic game.

ADAM is the substance you'll need to harvest to upgrade your current plasmids and acquire new ones. The method of doing this will lead to one of your big decisions you need to make in Bioshock. After killing a Big Daddy, you can choose to either kill the Little Sister for maximum ADAM, or save them and earn a lower amount. I chose the greedy route by killing them all, which led to the first time I experienced a tinge of actual sadness during a videogame. Late in the game (after killing many Little Sisters), I walked through an orphanage of sorts for the little girls. They were sitting around playing games, stacking blocks, and drawing. As I walked in, a group of them looked at me and one announced "He's the one that hurts us".

Every bit of the visual and audio presentation lends itself to the overwhelming atmosphere of rapture. The game looks stunning, both from a technical and artistic standpoint. Bolts of electricity, flames, explosions, and other effects leap off the screen, causing large battles to look like an underwater fireworks show. Bioshock's musical score is great, and the period music adds to the experience even more. Voice acting is superb, especially the Vincent Price-esque sound of Andrew Ryan, the megalomaniac who designed the city.

It's certainly not often that a game presents a living, breathing world and narrative on the same level that Bioshock offers. Other games like Metal Gear Solid offer unparalleled stories, but frequent cutscenes take you out of the experience somewhat. Bioshock offers a captivating narrative and experience without ever taking you out of the game. There were only one or two occasions where I couldn't control my character because of a cutscene. The entire story is told as you control the protagonist, progressing through the game. At no point did my interest in the gameplay or narrative wane. It's a disservice to throw the simple "FPS" label on Bioshock, as it offers so much more than the Halos of the industry. It's a haunting, captivating, beautiful title that should convince the Roger Eberts of the world to rethink their "videogames can't be art" viewpoint. Bioshock is an experience that is currently unrivalled in the industry, and it belongs in the library of every Xbox 360 owner.