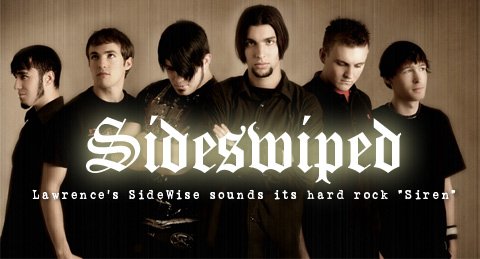 Pop the new SideWise CD in your car disc changer and you might think you've turned on the radio. Slick as a Vaseline-smeared piggie and loud as the first row of Lollapalooza, "Siren" comes roaring out of speakers with the same velocity afforded to major-label acts. The Lawrence band centers its heavy sound around a yin-yang of loud and soft-ethereal keys versus hard-hitting drums, pop synths versus metallic Marshall stacks. Alternately abrasive and chillaxed, the 14-song collection toes the genre lines between hard rock, metal and alternative. Looking ahead to their album's August 31 release, lead singer Nico and guitarist Scotty Anderson stopped by our podcast studio to preview some new tracks and discuss all things SideWise.

Pop the new SideWise CD in your car disc changer and you might think you've turned on the radio. Slick as a Vaseline-smeared piggie and loud as the first row of Lollapalooza, "Siren" comes roaring out of speakers with the same velocity afforded to major-label acts. The Lawrence band ...

lawrence.com: So what's in story for the record release party?

Scotty: We wanted to set up the ultimate CD release with bands that we're friends with and we know that they're good. We've got a band from Lawrence called Censura that just recently rearranged their lineup and they're amazing. Also we have Red Line Chemistry, who I think is (played Warped Tour two weeks ago). They're from Kansas City and they're an amazing live band also. Then our friends from Des Moines Mindrite. It's $10 and with admission you get a CD.

Where did you go to make this record?

Nico: We did the drums up at Black Lodge in Eudora, but everything else we did by ourselves in our garage. Then we went to St. Louis and mixed it with Jason McEntire, who is a great engineer.

Scotty: On top of that, when were done with it we sent it out to L.A. and we had it mastered by the same guy who mastered Soundgarden's "Superunknown"-Dave Collins. That was like, 'Wow'.

Tell us a bit about the song "Hemlock."

Nico: A long time ago, Socrates crushed up some hemlock and drank it. It's kind of about the whole thought of why he would do that to himself. It's either kill yourself or be killed by other people who turned their back on you.

How long have you been playing around Lawrence?

Scotty: We've been together since the middle of 2004 and we've pretty much always been out in Lawrence -two guys live in Kansas City, Nico included. We've played mostly in Kansas City and we're trying to get out to the Midwest. In Lawrence we've played four or five really good Granada shows but we haven't played the Jackpot or The Replay much.

You're kind of walking a line between hard rock and metal. Which camp do you feel more familiar with?

Scotty: Most of the bands we play with are metal bands, which sometimes works and sometimes doesn't. We try to really mix it up and get everybody-we have parts that are super heavy and parts that are real relaxed and poppy.

Each member is different. Our keyboard player listens to crazy classical music, and I'm real into hardcore metal and crazy stuff like Coalesce and The Esoteric. Our drummer (Jeff Davidson) is a jazz drummer.

Have you told him that you're not a jazz band?

Scotty: He doesn't listen very well. Nah-it works out. He likes metal too.

Did you come of age as teenagers seeing local bands like Coalesce?

Scotty: I still haven't seen Coalesce live. Our guitar player has been to almost every Esoteric show. We've always followed them and we've been trying to play shows with them : We still haven't-hopefully we will : As far as national bands, for me it's everything from Hatebreed, Bury Your Dead and Type O Negative-real heavy stuff-to Muse and Radiohead.

A lot of the hard rock scene around here kind of coalesces around Club Wars. Have you ever gotten involved with that?

Scotty: Yeah, actually in 2005 we won the championship out at the Beaumont. When we first started we heard about Club Wars and we were like, 'Wow, let's get involved in this'. Some bands that we're friends with now-at the time we were just like, 'Oh my god, these guys are so amazing'. We ended up doing really well and winning the championship. For us, at the time, it was absolutely the coolest thing ever. We got some money and ended up making the first CD with that. We still go to the shows and support the bands but we don't really play in it anymore.