Bad: Non-ranked servers have a lot of trouble with lag and disconnects

Flash back to the last true E3, in May of 2006. Sony had just announced their Sixaxis controller that utilized motion control. Almost everyone in attendance rolled their eyes at the seemingly-obvious attempt at emulating the Wii. A developer from Warhawk got on stage to demonstrate the new technology, and proceeded to overact in an effort to sell the capabilities of the controller. Despite the fact that he helped make the game, he still seemed to have trouble with the motion controls.

Once the show floor opened to the press, I walked to the Warhawk booth and had my first experience with the PS3. I played it for about 10 minutes, got tired of the mandatory motion control, and walked over to the Wii booth (along with about 95% of the other attendees). I remember thinking the game would probably be a disaster if they didn't include the standard analog stick option.

Luckily, the game has changed drastically in the last year and a half. Not only has analog stick control been added, it's now the default. This is obviously a good thing, as unreliable motion control isn't something gamers are going to want in fast-paced games like this. On top of the control switch, there has been another major change in the game's design it's now multiplayer exclusive. There is no half-assed campaign mode, no solo missions, nothing. Warhawk is now strictly a PSN title, available in either a $60 Blu-Ray disc (with included Bluetooth headset) or as a $40 downloadable title.

It's a ballsy move for sure, but one that I feel has paid off. With the effort squarely on multiplayer, they focused on making it a very entertaining experience with online opponents. It has full clan support, huge maps, and an incredibly deep ranking and medal system. 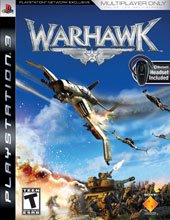 All of the multiplayer classics are here Deathmatch, Team Deathmatch, Capture the Flag, and Zones. Warhawk doesn't introduce anything new in terms of modes, but it handles the classics very well. Capture the Flag is easily my favorite, thanks in no small parts to the massive maps. There isn't a huge amount of locations, but the ones that are included are frequently broken down into smaller sections for some battles.

You can either go by foot, jeep, tank, or plane. Each of these options has obvious pros and cons, and they all control great. The variety of different playing styles is fantastic. I've spent equal time hiding by the flag and stabbing would-be thieves, boosting planes straight to the enemy base, sniping from towers, and driving around in jeeps and tanks backing up my allies. Ridiculous events happen frequently in Warhawk, as I've shot planes down with a rifle, shoved an enemy off a cliff with the wing of my plane, and caused an enemy aircraft to crash directly into the flag and explode. It's these kind of moments that really draw you in and make you want to keep playing.

In ranked servers, I have yet to encounter any problems with lag or disconnects. However, to play local multiplayer (split-screen), you have to be on an unranked server, which is far less reliable. I'd say the game crashed, lagged, or otherwise failed in about 70% of these rooms. Hopefully Sony will work on this problem, as it can be a lot of fun riding around in a jeep with two local friends while you battle enemies from all over the world.

There's nothing particularly astounding about the visual presentation of the game, but it still handles a ton of onscreen action with no trouble whatsoever. Planes explode in a huge shower of debris, and various weapons all look great. You won't hear much music other than in the menus or during especially important gameplay moments. The music that is included is suitably epic and war-like, however.

The Playstation 3 needed this. It's long been criticized for a lack of good online games and a lack of good games in general. Warhawk is both, and the console is much better off for it. PS3 owners, you (finally) have another great exclusive title that you can place next to Resistance on your shelf.